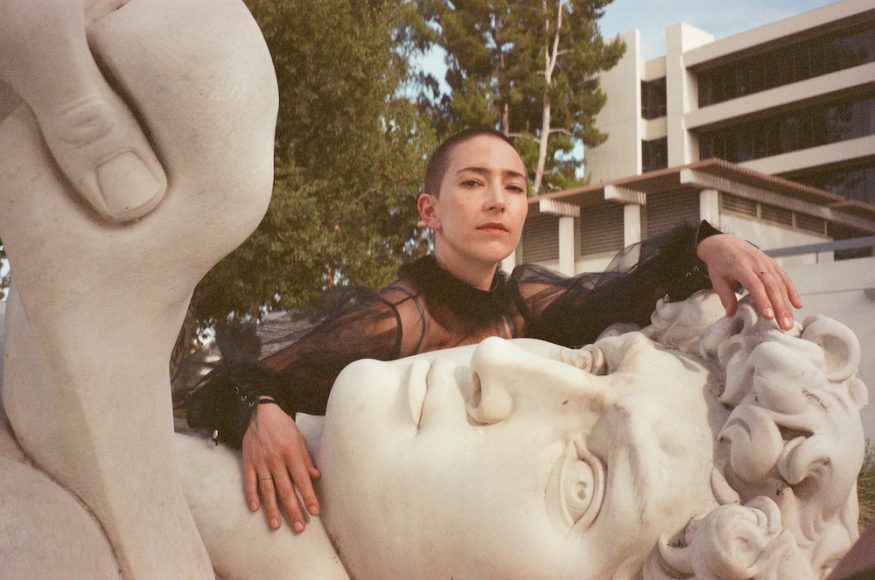 “Pour me over, show me how to begin,” intones Maia Friedman on the first track of her lush, immaculate debut Under The New Light. Following a breadth of experience as a collaborator and multi-instrumentalist, Friedman’s densely-textured pop is wise and evokes what she wants it to: the sensuality of touch, feeling and image, a sonic form of empathy.

As an ode to the shifting landscape of our own lives, Friedman began Under the New Light four years ago, while teaching music and performing in multiple New York bands. “Collaborating gives me the juice,” she says, laughing. In 2018 Friedman was asked to join Dirty Projectors and a heavy schedule of touring followed. She sang and co-wrote the lyrics for the first of their 5 EPs, released last year, most notably for the soothing earworm “Overlord.” Meanwhile, Friedman also formed Coco, which began as a collaborative recording project with Oliver Hill (Dustrider, Pavo Pavo) and Dan Molad (Lucius, Chimney) and they released music anonymously until the announce of their 2021 self-titled debut.

Friedman’s voice lends a unique quality of warm comfort that permeates all her collaborations, but Under the New Light presents her full intention. Her role is that of the wounded healer, one who has gained wisdom through darkness and grief. In her empathetic role, rather than share the details of any struggling, Friedman instead sought to build a cloud of safety for those who might have pain of their own. It’s an antidote to suffering rather than its depiction. The closest she comes to stark personal detail is on standout “Sunny Room”: “To be in a place that knows your mold / The tighter your hand the less you hold / You’re looking for a way to ease your mind / So you won’t make a mess of your good time.”

Growing up in the Sierra National Forest region of central California, Friedman lived with her mother, their two dogs and four cats, playing in the wilderness until evening when her mom blew a whistle for her return. The family moved to the southern California coast when she was ten where her father, a film editor, director and teacher, cultivated the home’s expansive music collection, gifting Maia a jazz album every birthday. Her mother, a Jungian Psychoanalyst, led a dream group and filled their home with books on mythology, symbolism and dream interpretation.

It’s this translation of the image into sonic reality that Friedman shoots for and achieves wholly throughout Under the New Light. On “Elevate Us,” a sparse, succinct ballad, Friedman lifts a simple moment of observation into the weight of the world: “listen to the woman on the screen, promising everything / I am left more or less the same, with or without it / Oh how they elevate us, not that it’s for real / But ah, the elevation I feel / like a flock above the wires, carried by the current / In with the breeze, out with the front / We watch the rising flood.”

As with her other projects, Friedman collaborated closely on Under the New Light as a trio with Tom Deis (Pineapple Room Studio) and Peter Lalish, with Dan Molad in a production role. They worked on the album sporadically across the country, in Omaha, New York, and Los Angeles. Friedman had melodies but left it open, with the trio co-writing the swirling harmonies together. The arrangements are less sparse than they feel and even when Friedman’s voice is accompanied by a single guitar, there are swirls of ambience and synthesized sound design building around her.

The album plays like a fulfilled journey, and though Friedman is still somewhere in the middle of her own, on Under the New Light her vision is fully formed. On the bright closer “A Sleep in the Garden,” she nods, for better or worse, toward the future: “I won’t look away / when you show me more.”