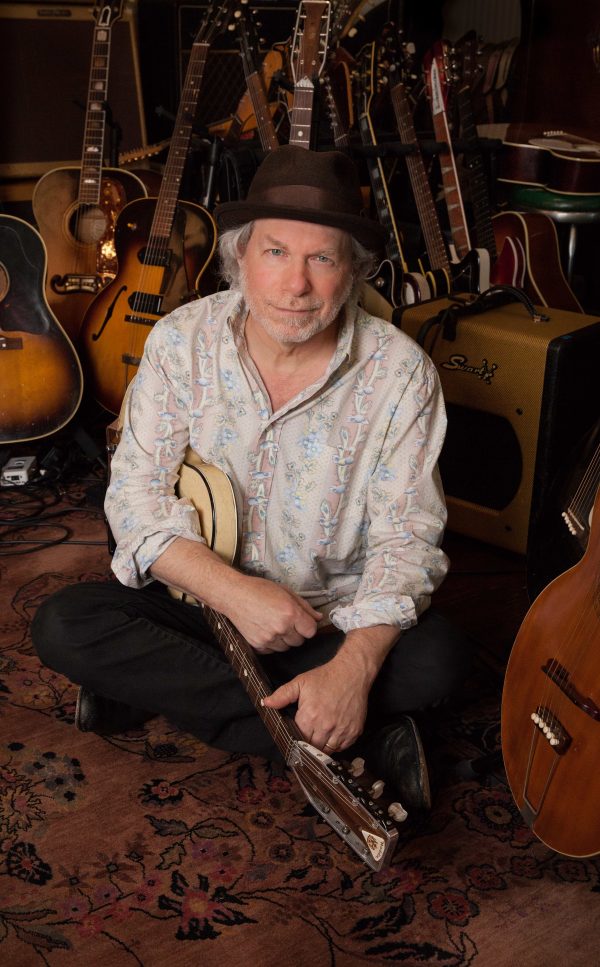 Buddy Miller smiles by quarters, not even halves, his lips struggling to keep secret what his eyes constantly betray, dancing, sparkling: That he is delighted.

Delighted by very nearly everything, even by the carefully wrought solutions to vexing problems.

For years Buddy stood in the shadows, a succession of tattered baseball caps concealing his grizzled face. He favors a porkpie hat these days, not consciously an homage to John Hartford (though it fits), and enters his sixth decade no longer doubting where the spotlight should fall.

“You’ll be judged by the company you keep,” moms say, and maybe something of those words lingers in the air when they’ve left the room. Know Buddy, then, by the company he has kept, for he has been at the fulcrum of much of the best music to emerge from Nashville (and well beyond) since finally he and his wife, Julie, moved there in 1993, playing indepensible roles with Shawn Colvin (back in New York, before), Emmylou Harris, Lucinda Williams, Steve Earle, Patty Griffin, and Robert Plant. Producing or co-produced stunning albums with Jimmie Dale Gilmore, the Carolina Chocolate Drops, Solomon Burke, Patty Griffin, Allison Moorer, and, yes, Robert Plant’s Band of Joy. Writing and co-writing songs covered by artists as disparate as the Dixie Chicks, Hank III, and Shemekia Copeland.

Not to mention his own recording career, with and without Julie. And the new show he and longtime friend, former roommate, and collaborator Jim Lauderdale have launched on SiriusXM Radio, just so they can talk about and play the music they love. Which, naturally, has evolved into an album.

Here, then, are Buddy Miller’s recorded highlights, a selective and annotated discography…

Producer, All Fall Down, by Shawn Colvin

Co-producer/principal musician, Band of Joy, the name taken from Robert Plant’s first band, the ensemble featuring Plant along with Buddy and Patty Griffin, an outgrowth of Buddy’s work as a member of the Raising Sand touring band. Grammy nomination for best Americana album.

Written In Chalk (New West), the second album-length collaboration with Julie, mostly her songs and his arrangements, with covers of Mel Tillis and Leon Payne, and a cameo from Robert Plant. Americana Music Association Album of the Year.

Producer, Mockingbird, by Allison Moorer, perhaps her most assured album.

Named Artist of the Decade by No Depression magazine in its 75th and final issue.

Producer, Nashville, by Solomon Burke, in which one of the greatest soul singers of all time took up residence in Buddy’s living room and held forth, surrounded by singers like Emmylou Harris, Patty Griffin, and Dolly Parton.

Universal United House of Prayer (New West), inaugurating his collaborations with the McCrary Sisters, a southern gospel triumph with a Dylan twist. Americana Music Association Album of the Year.

Buddy and Julie Miller (HighTone), the first formal, album-length collaboration, including Dylan’s “Wallflower” and their own (not the Standells’) “Dirty Water.” Americana Music Association Album of the Year.

Co-producer, One Endless Night (Rounder), by Jimmie Dale Gilmore, a reminder that Buddy has spent some years in Texas, and knows his way around a honky-tonk.

Cruel Moon (HighTone), including the original of Lee Ann Womack’s hit, “Does My Ring Burn Your Finger?,” closing with a song from Pop Staples.

Poison Love (HighTone), his creative breakthrough, the album on which it is clear Buddy Miller must be heard.

Your Love and Other Lies (HighTone), the emergence of a great honky tonk singer, and the re-emergence of a powerful songwriting duo. Don’t ask about the record he made before this one.

Meet Julie Miller (Myrrh/Word), the beginning of Julie’s career in contemporary gospel. The first track is titled “Dogtown,” and Buddy Miller is credited as “associate producer.”