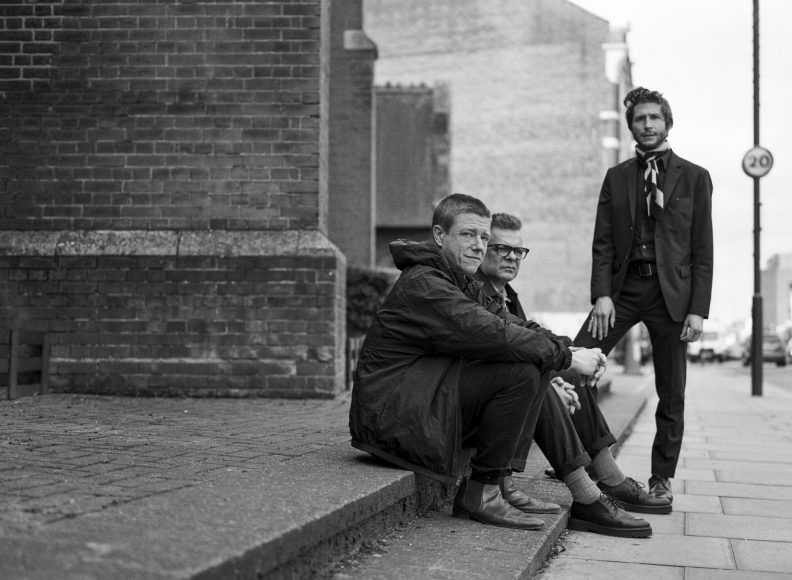 “Still in shape, my methods refined,” sings Paul Banks on ‘Toni’, the opening track and lead single from Interpol’s 7th LP The Other Side of Make-Believe. The album breaks fresh ground for the group: parallel to exploring the sinister undercurrents of contemporary life, Interpol’s new songs are imbued with pastoral longing and newfound grace. Daniel Kessler’s serpentine guitar arrangements crest skywards, Samuel Fogarino shatters his percussive precision into strange metres, while Paul Banks’ sonorous voice exudes a vulnerability that is likely to catch most long-term fans of the band off guard. After all, says Banks, “there’s always a seventh time for a first impression.”

The Other Side of Make-Believe began remotely across 2020. In early 2021, Interpol reconvened to flesh out new material at a rented home in the Catskills, before completing it later that year in North London, working for the first time with production veteran Flood (Mark Ellis), as well as teaming up again with former co-producer Alan Moulder.

If fate didn’t quite ordain the circumstances for Interpol’s seventh album, it was at least fortunate that the band had happily concluded their Marauder cycle on stage in front of 30 thousand-odd Peruvian fans. Rather than be sent scrambling like so many other musicians, when the first lockdown clamped Interpol had no new release to promote and no tour to rearrange. They quickly got into a productive mood.

Writing on their own in those geographically-dispersed early stages gave the members a way out of their respective heads: “We really extracted the honey out of this situation”, says Fogarino. Kessler echoes the sentiment: “Working alone was raw at first, but has opened up a vivid new chapter for us.” In the Interpol Venn Diagram, each member found a way of expanding their individual circle in perfect harmony.

As Banks was grounded in Edinburgh for close to nine months, he got cosy in a window-side chair with a pen, pad and atypically cream-coloured bass guitar. “We usually write live, but for the first time I’m not shouting over a drumkit,” he says. “Daniel and I have a strong enough chemistry that I could picture how my voice would complement the scratch demos he emailed over. Then I could turn the guys down on my laptop, locate these colourful melodies and generally get the message across in an understated fashion.” Banks adjusting his personal volume dimmer to a hush chimes with a period of global disquiet and the yearn for reconnection: “It’s like Mickey Rourke in Barfly, singing to a patron at the end of the tabletop, and we never felt the need to flip that smoky intimacy into something big and loud when it came to rehearse and record. I got a real kick out of doing the opposite.”

Coming from a group whose early material was characterised by Polish knife-wielders and incarcerated serial killers, you might expect Interpol’s take on the present day to be an emotional tar pit — perhaps doubly so, given the towering credentials of Flood and Moulder’s history with Nine Inch Nails, Curve, Gary Numan, Depeche Mode and more.

Yet Banks felt the call to push in a “counterbalancing” direction, with paeans to mental resilience and the quiet power of going easy. “The nobility of the human spirit is to rebound,” he says. “Yeah, I could focus on how fucked everything is, but I feel now is the time when being hopeful is necessary, and a still-believable emotion within what makes Interpol Interpol.” Kessler concurs: “The process of writing this record and searching for tender, resonant emotions took me back to teenage years; it was transformative, almost euphoric. I felt a rare sensation of purpose biting on the end of my fishing rod and I was compelled to reel it in.”

Even with spare piano caressing the intro of ‘Something Changed’, open-hearted cyclical chord progressions on ‘Passenger’, or anthemic waves of Kessler’s cresting guitar on ‘Big Shot City’, it doesn’t mean Interpol are entirely stopping to smell the roses, though. The Other Side of Make-Believe’s title, cover and a frequent lyrical lean toward fables, smokescreens and the mutability of truth reflect Banks’ disgust with the curdling of the information age. “I feel like the slipperiness of reality, and being willing to get violent on the basis of a factual disagreement, has had a super strenuous effect on the psyche of everyone in the world. Although,” he laughs, “I was talking about it so often that it kind of spooked my bandmates, so I found a way to express my concerns more through the lens of human beings’ non-rational faculties, and less civilizational collapse.”

On The Other Side of Make-Believe, a deep interpersonal understanding means each member respects the other’s respective strengths better than ever, letting Interpol’s elemental qualities shine through. Song by song, Kessler sketches the architectural blueprint (invariably while watching a film — locus of inspiration for almost every song in the band’s catalogue), Banks frames artwork on the wall, then Fogarino arranges the furniture to have a certain positioning and intent.

Fogarino highlights Flood’s part in this equation “was to hyperbolise all of our good qualities. Our band has never exploited rock ‘n roll tropes, no big drum fills or wailing solos, so he located the core honesty in our sound and found a way to widen it. There’s a phrase I love about drumming: ‘the rhythm hates the melody’ — the best kind of drumming either totally accentuates what’s being conveyed, or ploughs through it.” So what does the splashy, dramatic beat on songs like ‘Renegade Hearts’ and ‘Gran Hotel’ imply? The answer comes back with a grin: “I guess Flood gave me room to plough.”

The band found themselves struck by the producer’s egoless way of operating and the breeziness of recording in his North London studio. They also seem charged by how much Flood and Moulder complimented, rather than challenged, their kinetic energy when performing. “I wouldn’t change a thing,” Kessler states. And though he means Flood and Moulder’s contributions, that sentiment extends to Interpol’s work as a whole.

The Other Side of Make-Believe will soon feel as familiar in the public consciousness as it is to Paul Banks, Daniel Kessler and Sam Fogarino. Ever the paradox, the noirish trio have weathered nearly seven albums’ and several line-ups’ worth of rollercoasters far better than anyone might have predicted, never letting their sense of purpose escape. Over time, tags like ‘alternative’ and ‘indie’ have even faded from view. They are simply a rock group nowadays; one of the most distinctive, consequential and enduring rock groups of the 21st century so far. And a quarter-century into their lifespan, the band are all fired up again.