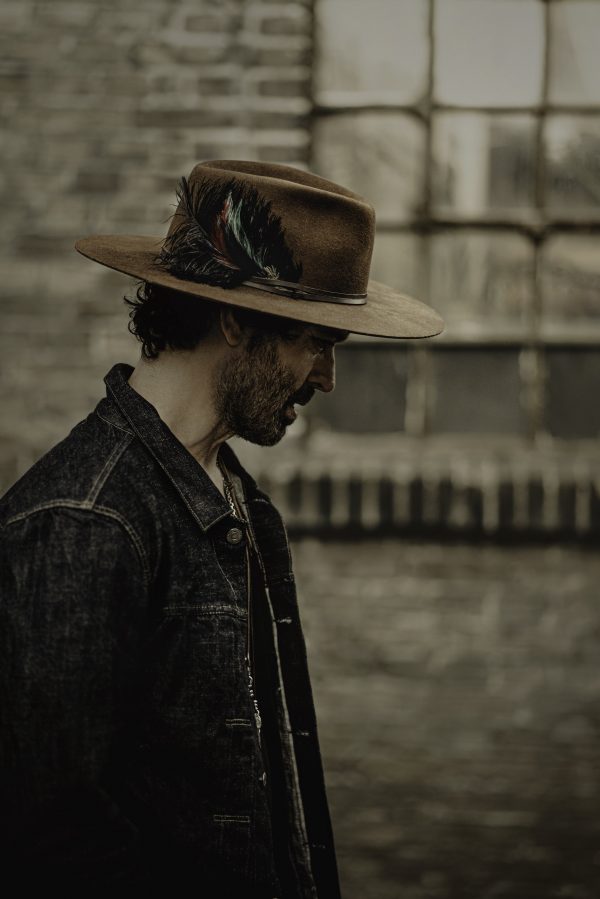 What is it about Doyle Bramhall II, and why does everybody want to work with him? Since 2000, the uniquely gifted guitarist, singer, songwriter and producer has been practically joined to Eric Clapton’s hip as both an onstage and studio collaborator. In addition to Slowhand, other music greats have sought Bramhall’s distinctive talents: Roger Waters, T-Bone Burnett, Elton John, Gregg Allman, Allen Toussaint, Sheryl Crow, Billy Preston, Dr. John, Michael McDonald, Erykah Badu, Questlove, Meshell Ndegeocello – as it’s often said, the list goes on and on.

So what is it about this dynamic, multi-faceted performer – a southpaw who plays his guitar turned upside-down and strung righty, no less – that makes him the first-call pick for music stars of virtually every modern genre?

“I don’t know if I can answer that,” Bramhall says sheepishly. “Without appearing immodest, I can admit that I’ve led a pretty charmed life. One musical experience flowed into the next, and over time I’ve been able to work with so many people I’ve admired and who influenced me.

If I can point to one thing, I think it’s because I immerse myself in the spirit of collaboration. I really want to understand where somebody else is coming from, and that makes me support and enhance what they’re doing. Perhaps that’s why other people want me to play with them.” He lets out a laugh and says, “Nobody’s ever really told me why!”

Bramhall grew up in Austin, Texas with music coursing through his blood. His father, the elder Doyle Bramhall, had played drums in a band with his childhood friend, guitarist Jimmie Vaughan (their band The Chessman once opened for Jimi Hendrix), and he would go on to collaborate with other Lone Star greats like Jimmie’s brother, Stevie Ray, as well as Freddie King and Lightnin’ Hopkins. The younger Bramhall picked up the guitar early and would jam with his dad. By the age of 15, he was rubbing shoulders with the Vaughan brothers (“they were like family to me”) while playing in various bands, sometimes making $400 for weekend gigs.

At 18, he was tapped by Jimmie Vaughan to join the Fabulous Thunderbirds, and two years later, following the tragic death of Stevie Ray Vaughan, he and fellow Austin guitar ace Charlie Sexton teamed with SRV’s Double Trouble rhythm section, drummer Chris Layton and bassist Tommy Shannon, to form the band Arc Angels. The band released a strong self-titled debut album in 1992 but broke up before they could record a follow-up. Bramhall then signed with Geffen Records and embarked on a solo career, issuing a pair of albums – ​Doyle Bramhall II (1996, Geffen Records) and ​Jellycream​ (1999, RCA) – that won the hearts of music critics as well as a couple of music icons, Roger Waters and Eric Clapton, who would soon call upon his services.

Bramhall played guitar and sang both lead and backup vocals during Roger Waters’ 1999-2000 In the Flesh​ world tour (his performances are documented on the CD and DVD releases, ​In the Flesh – Live​), and his association with the Pink Floyd singer might have lasted longer had he not received a call from Clapton. “One day I pick up the phone, and I hear this voice – ‘Hey, this is Eric, and I’m a huge fan of what you do,’” Bramhall recalls. “’I’d love to get together with you because I’m making a record with B.B King.’”

That album would be 2000’s ​Riding with the King​, Clapton’s Grammy-winning, double platinum duet recording with one of his biggest blues influences. Clapton not only featured Bramhall’s virtuosic playing on the album, but he also covered two of his favorite cuts from ​Jellycream​, “Marry You” and “I Wanna Be.” “I was honored to be brought in to play with Eric and B.B.,” Bramhall notes, “but to have Eric do a couple of my songs was thrilling beyond belief.”

Riding with the King​ was the start of a two-decade-long partnership that saw Bramhall join Clapton’s touring band as his fiery guitar foil and in the studio as a trusted and creative collaborator. Bramhall performed ace axe lines on Clapton’s 2004 Robert Johnson tribute albums, ​Me and Mr. Johnson​ and ​Sessions for Robert J,​ and his own songs were woven into records such as ​Reptile​ (2001), ​Back Home​ (2004) and ​The Road to Escondito​ (2005). Eventually, Bramhall graduated to co-producer on the albums ​Clapton​ (2010) and ​Old Sock (2013).

While touring and recording with Clapton, Bramhall jetted around the globe to work with the numerous music stars who were now vying for his attention. Among them was Sheryl Crow – Bramhall co-produced and wrote songs for the singer’s 2011 album, ​100 Miles from Memphis​, and then joined her on tour (he also contributed shimmering guitar work on Crow’s ​Be Myself last year). And he began a longtime association with the Tedeschi Trucks Band, joining the group on tour and as well as writing songs for band and solo recordings by its founders, Derek Trucks and Susan Tedeschi.

With Bramhall concentrating on his career as a sideman and producer, he had put his solo work on the back burner, but he returned in earnest on his self-produced album from 2016, ​Rich Man​, on which he explored deeply personal themes and feelings in the wake of his father’s 2011 death in a series of songs that mixed white-hot blues rock, grooving Southern soul as well as some of the transfixing Middle Eastern sounds he’d absorbed in his travels to Morocco and India. Reviews for ​Rich Man​ were rhapsodic: ​American Blues Scene​ raved that the album was “generously filled with a multitude of aural pleasures and sonic landscapes that are full and vibrant.” And AllMusic opined that Bramhall’s “first album in 15 years is also his best… It starts expansive and keeps expanding.”

“That album was me sort of breaking the glass to become the artist and producer I wanted to be,” says Bramhall, who now makes good on his creative mission with his fifth solo album, Shades​. Recorded mostly in Brooklyn and Los Angeles, the album is a spellbinding blend of grungy blues, raucous garage rock, transcendent psychedelia, and soul-stirring ballads that sees Bramhall reaching new heights as a guitarist and vocalist while responding to his heart’s most urgent commands as an arranger and lyricist.

“I called the album ​Shades​ after looking at photos taken for the record,” Bramhall explains. “There can be shades of light and color, but also of sound and emotions. I believe that an album represents a period of time in one’s life, almost like a snapshot. On the last album, I was reconciling one set of feelings, and now I’m at a different place personally and emotionally. A lot of the songs are about understanding and embracing a sort of inner peace that’s taken me a long time to discover. Hopefully, those realizations are things other people can relate to.”

Performing alongside Bramhall on ​Shades​ is a group of musicians he’s worked with over the years, such as bassist Chris Bruce, multi-instrumentalist and string arranger Adam Minkoff, and drummers Carla Azar and Abe Rounds. There are also notable appearances by a host of friends and luminaries, chief among them Eric Clapton, whose blistering back-and-forth guitar work with Bramhall on the quaking R&B-tinged “Everything You Need” is an axe lover’s dream.

Bramhall and pianist-singer Norah Jones have been making music together for years – she dueted with him on ​Rich Man’s​ “New Faith” – and the two form a heavenly alliance on the elegant ballad “Searching for Love.” A startling sonic change occurs on “Live Forever,” a rip-snorting, volatile dose of amp-busting rock on which Bramhall teams with Texas pals the Greyhounds. Some songs you craft and refine for weeks,” Bramhall observes, “and others you just blast out. This one was the latter. “I called the guys up and said, ‘Hey, let’s do something Austin-style. Within three hours, we had that track.”

Shades​ concludes with a reverent reading of Bob Dylan’s classic “Going, Going, Gone,” a gem from the singer’s 1974 album, ​Planet Waves​. Bramhall had recently performed the song with the Tedeschi Trucks Band at a Gregg Allman tribute concert last year (the singer covered the track on his final album, ​Southern Blood​), and he felt that a reunion with the group would make a powerful coda on his record. “The whole thing, all the guitar parts with me, Derek and Susan, came together very naturally. I recorded it with the entire 11-piece band right in the studio.”

Summarizing the experience of recording ​Shades​ just two years after ​Rich Man​, Bramhall says, “The new record finally feels like I’m comfortable in my own skin, like I don’t have anything to prove other than trying to express myself as honestly as I can. As an artist, writer and producer, I’m in a good place, and I think I can allow this flow of music to come out and form a real body of work that my fans can appreciate. I’m thrilled to have them go on this journey with me.