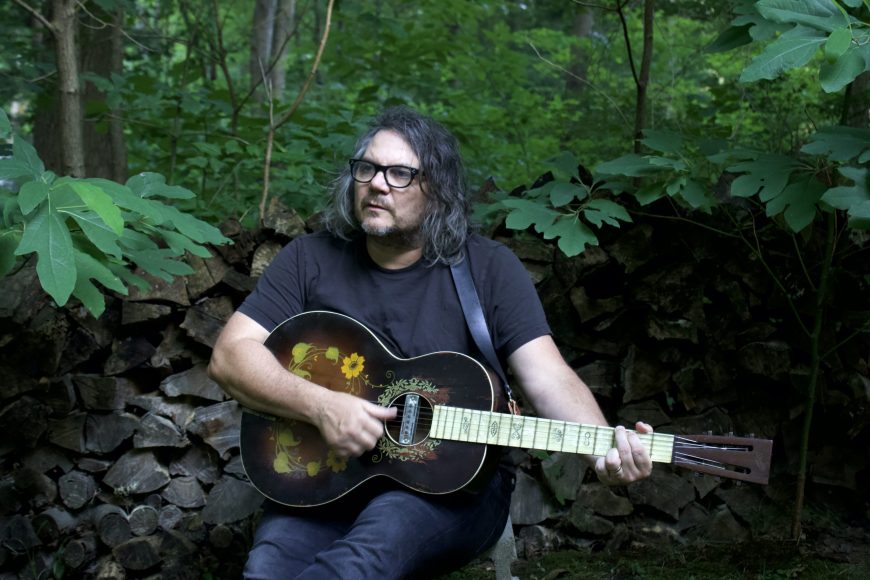 As the founding member and leader of the Grammy Award winning American rock band Wilco, and before that the cofounder of the alt‐country band Uncle Tupelo, Jeff Tweedy is one of contemporary music’s most accomplished songwriters, musicians, and performers.

Jeff has released two solo albums, written original songs for eleven Wilco albums, and is the author of The New York Times’ Bestseller, Let’s Go (So We Can Get Back): A Memoir of Recording and Discording with Wilco, etc. 2020 sees the release of Jeff’s third solo album, Love Is The King, and second book, How To Write One Song.

He lives in Chicago with his family.

It was inside Jeff Tweedy’s second home, The Loft in Chicago, that Love Is The King was recorded in April of 2020. Surrounded by an assemblage of treasured instruments and loved ones in a world that felt more and more alien by the day.

Not long into Wilco’s North American tour, Tweedy’s natural instinct to return home was realized when all further dates were abandoned. He escaped the anxiety and dislocation of being out at sea during a worldwide crisis and fell into the familiarity of the studio. With his sons, Spencer and Sammy, by his side, he set the task of writing and recording a song a day until they held an album in their hands. Creativity/music was their comfort food.

Rather than directly addressing the significant disruption unfolding outside, Tweedy looked inwards and examined the matters that fear, separation and vulnerability pulled focus on.

“Never let pain go to waste,” he tells me.

The candor with which he calls upon the nourishing elements of nature, gratitude and love is effortless. His wisdom is frank and possesses a glorious wit as he accepts without resistance the inherent duality of living and loving.

On the hymnal “Robin Or A Wren,” he laments death in one breath whilst welcoming reincarnation in the next. “At the end of the end / Of this beautiful dream we’re in / I’ll wake up again / A robin or a wren.” Hope against despair.

Songs unfold with the poetic structure of short films—his language poised and concise, personal but collectively shared. Comforting country songs paint vivid scenes of escapism. Songs of separation become eulogies to the love he is apart from. He sings of the world falling apart and whistles a solo. Joy against sorrow.

Only on “Half-Asleep” is there an air of disorientation. Desperation gilds the refrain: “There’s no other / there’s no one / only you.” He pulls himself out from the fever dream in time to close the album with generous resolve: “When you need me, I’ll be there.”

The economy employed by the players is charged with emotion. Precision and purpose feel personal. I imagine the sons locking eyes with their father, trusting him to embrace space as their concrete counterpart.

The presence of the “guitar solo,” which became known as “that guy” during the session, blows the window wide open. Played through a broken Echoplex that needed shoeing from time to time, its elemental presence shows the hand of what lies outside the room. The solo on title track, “Love Is The King,” especially aches with tension. “That guy” is crying. Is divorcing himself from the instrument allowing Tweedy to fully lean into the suffering? And yet whilst the voice and guitar are seemingly at odds—one sings reassurance, the other cries disruption—they hand off to one another with the grace of life-long relay runners.

This is an album that embraces duality, after all.

In the dark times

Will there also be singing?

Yes, there will also be singing

About the dark times.

Poetry and music animate the human struggles associated with a particular time more so when they don’t attempt to sing to the times directly but allow them, unfettered, to permeate the process.

The initial impetus was to self-soothe as a family and shield in the comfort of creativity. However, on Love Is The King,Tweedy has balanced the books and penned a beautifully honest ode to love and hope. He has documented a time in history through the personal lens of shared human experience.

There is solace here for all who need it.