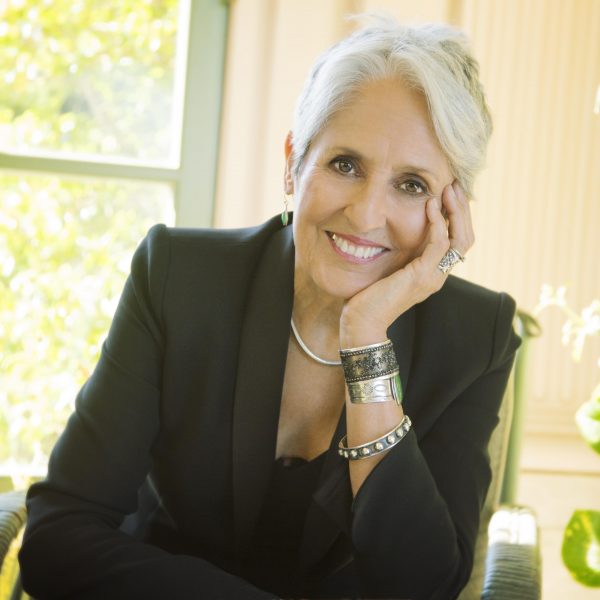 Six decades after becoming a regular on the coffee house scene that was emerging around Club 47 in Cambridge, MA, Joan Baez determined that “2018 will be my last year of formal extended touring.” With her 2017 Rock And Roll Hall Of Fame induction topping off a lifetime of awards and honors for her recordings and human rights achievements around the globe, the symmetry of Joan’s decision reverberates. “I’m looking forward to being on the road with a beautiful new album about which I am truly proud,” she said. “I welcome the oppor¬tun¬ity to share this new music as well as longtime favorites with my audiences around the world.”

She remains a musical force of nature, and an artist of incalculable influence. Her mission has never wavered in sixty years. Commenting on the song “I Wish The Wars Were All Over,” from her new album Whistle Down The Wind, Joan asks, “Will a better world come? I don’t know. But we have to do our work for a just and loving society whether the end comes tomorrow or whether we are still holding fast for generations to come.”

Whistle Down The Wind, Joan’s first new studio album in a decade, gathers material by some of her favorite composers, from Tom Waits (“Whistle Down The Wind,” “Last Leaf”) and Josh Ritter (“Be Of Good Heart,” “Silver Blade”), to Eliza Gilkyson (“The Great Correction”) and Mary Chapin Carpenter (“The Things That We Are Made Of”). Ritter’s “Silver Blade” has been described by Joan as “a bookend to ‘Silver Dagger’ [the first song on her self-titled debut LP of 1960] at the end of this nearly sixty-year career … like something I would have picked up in Club 47 when I was 18.”

Always a lightning rod for talented songwriters, Joan considers the ecological disasters ahead in “Another World” by Anohni (formerly of Antony and the Johnsons), a song whose beauty and darkness resonate deeply. Similarly, when Joan heard Zoe Mulford sing “The President Sang Amazing Grace” (from her album Small Brown Birds) live on the Bay Area’s community-supported Pacifica radio station KPFA, it was a passionate reminder of President Obama’s effort to heal the congregation in a Charlotte church in June 2015. A 440-year old manuscript of an American rebel imprisoned by the British in our Revolutionary War is the source of “I Wish The Wars Were All Over,” adapted by balladeer Tim Erickson.

Henry and Baez recorded Whistle Down The Wind in Los Angeles over ten days, inventing every song virtually from scratch with a core band including John Smith and Mark Golden¬berg (acoustic guitars); Greg Leisz (acoustic guitar, pedal steel, mandolin, and Weissenborn); Tyler Chester and Patrick Warren (keys); bassist David Piltch; and drummer Jay Bellerose. “We both work fast and were musically on the same wavelength,” Joan says. “I work best with musicians who are as willing as I am to wing it, and he assembled a group of players who did just that.”

Whistle Down The Wind succeeds 2008’s critically acclaimed, Grammy®-nominated Day After Tomorrow, produced by Steve Earle, the release of which coincided with the 50th anniver¬sa¬ry of Joan’s first performances at Club 47. Day After Tomorrow and Whistle Down The Wind both underscore Joan’s long history of mutual mentoring, introducing songs by artists and songwriters, known and unknown, a hallmark of her recordings and performances ever since the turbulent 1960s.

Early on, she focused awareness on songwriters ranging from Woody Guthrie to Bob Dylan, Phil Ochs, Richard Fariña, Leonard Cohen, and Tim Hardin, among others. Her repertoire grew to include songs by Jacques Brel, Lennon-McCartney, Johnny Cash and his Nashville peers including Kris Kristofferson and Mickey Newbury, South American composer Violeta Para and more. With the passage of time, the list of songwriters whose work she recorded or performed grew to encompass Jackson Browne, Janis Ian, John Prine, Stevie Wonder, Steve Earle, Tom Waits, and many others, including songs written by Joan herself.

Many traditional songs that Joan introduced on her earliest LPs found their way into the rock vernacular: “House Of the Rising Sun” (the Animals), “John Riley” (the Byrds), “Babe, I’m Gonna Leave You” (Led Zeppelin), “What Have They Done To the Rain” (the Searchers), “Jackaroe” (Grateful Dead), and “Long Black Veil” (the Band), to name a few. A multitude of British acts who trace their origins to Fairport Convention, Pentangle, and Steeleye Span were inspired by Joan’s versions of “Geordie,” “House Carpenter,” and “Matty Groves.”

From the beginning, her life’s work was mirrored in her music. At a point when it was neither safe nor fashionable, Joan put herself on the line countless times. She sang about freedom and Civil Rights everywhere, from the backs of flatbed trucks in Mississippi to the steps of the Lincoln Memorial at Rev. Dr. Martin Luther King’s March on Washington in 1963. She withheld a portion of her income tax from the IRS to protest military spending in 1964, and participated in the birth of the Free Speech movement at UC Berkeley. A year later she co-founded the Institute For The Study Of Nonviolence near her home in Carmel Valley. She stood in the fields alongside Cesar Chavez and migrant farm workers striking for fair wages in 1966, and opposed capital punishment at San Quentin during a Christmas vigil.

The soundtrack for the tumultuous ’60s is heard on Joan’s remarkably timeless Vanguard LPs. In 1968, she began a four-year recording stint in Nashville, with Music City’s famed “A-Team” providing backup on her biggest career single, a cover of The Band’s “The Night They Drove Old Dixie Down” (1971). During this same time, she traveled to Hanoi with the U.S.-based Liaison Committee and helped establish Amnesty International on the West Coast. In 1975, her self-penned “Diamonds & Rust” began its path to becoming an American standard. Bob Dylan’s Rolling Thunder Revue tours of late 1975 and ’76 (and the resulting movie Renaldo & Clara, released in 1978) co-starred Joan Baez.

Joan’s first album sung entirely in Spanish was released in 1974, dedicated to Chileanos who suffered under the rule of Augusto Pinochet. When she traveled to Latin America in 1983 for a series of concerts, hostile authoritarian governments prevented her from performing. When she returned in 2013 for the first time in 30 years, the tour was a triumphant success, her performances heralded by the media and public alike.

As the ’70s continued, Joan marched with the Irish Peace People in Northern Ireland in 1978, calling for an end to violence. She appeared at rallies on behalf of the nuclear freeze movement, and performed at benefit concerts to defeat California legislation that would have banned openly gay people from teaching in public schools. She received the American Civil Liberties Union’s Earl Warren Award for her commitment to human and civil rights issues; and founded Humanitas International Human Rights Committee, which she headed for 13 years.

In the final decades of the 20th century, Joan was a fixture on Amnesty International’s Conspiracy of Hope tour in 1986, with U2, Peter Gabriel, Sting and others. Her 1989 concert in Czechoslovakia was cited by President-to-be Vaclav Havel as a tipping point in the Velvet Revolution. She traveled to war-torn Bosnia-Herzegovina in 1993, at the invitation of Refugees International; and sang in honor of Pete Seeger at the Kennedy Center Honors Gala in Washington, D.C. in 1994.

The Four Voices benefit concerts with Mary Chapin Carpenter and the Indigo Girls that took place in the 1990s (reprised for eleven shows in 2017), reinforced Joan’s belief in the new generation of songwriters’ ability to speak to her. The 1995 live album Ring Them Bells expanded on the Four Voices format (featuring duets on their compositions with Mary Chapin Carpenter, the Indigo Girls, Dar Williams, Janis Ian, and more). It was followed by Gone From Danger (1997), featuring songs from a new generation of songwriters including Dar Williams, Richard Shindell, Sinéad Lohan, and others.

Since the turn of the century, Joan has received a Lifetime Achievement Award at the 49th annual Grammy Awards® in 2007, where she introduced the Dixie Chicks and saluted their courage to protest the Iraq war. The 50th anniver¬sa¬ry of Joan’s debut at the 1959 Newport Folk Festival was under¬scored by the PBS American Masters series premiere of her life story, Joan Baez: How Sweet The Sound (2009). She attended the first presidential inauguration of Barack Obama that year, and returned to Washington in 2010, for In Performance at the White House: A Celebration of Music from the Civil Rights Movement, an all-star concert broadcast live from the East Room.

Joan’s landmark debut album of 1960 was honored by the National Academy of Record¬ing Arts & Sciences in 2011, who inducted it into the Grammy® Hall Of Fame; and by the Library of Congress in 2015, who selected it to be preserved in the National Recording Registry. That same year, Amnesty International’s highest honor was bestowed on Joan, the Ambassador of Conscience Award, in recognition of her exceptional leadership in the fight for human rights.

Joan’s 75th birthday was celebrated in 2016, at New York’s Beacon Theater, where she was joined by Paul Simon, Jackson Browne, Emmylou Harris, Richard Thompson, and others. The concert premiered on the PBS Great Performances series, and was simultaneously issued on DVD and CD. At the Rock And Roll Hall Of Fame induction in April 2017, it was noted that amidst the Harry Belafonte and traditional folk covers that Joan recorded on her post-high school demos, she also had her way with Hank Ballard and the Midnighters’ “Annie Had A Baby,” the Coasters’ “Young Blood,” and Ritchie Valens’ “La Bamba.”

2018 saw the first solo exhibition of Joan’s paintings presented in Mill Valley, CA. She called the exhibit “Mischief Makers” – portraits of risk-taking visionaries who have brought about social change through nonviolent action. The bulk of the collection was subsequently purchased by the Federated Indians of Graton Rancheria and donated to Sonoma State University, where it will eventually be displayed at an envisioned new social justice learning center on campus.