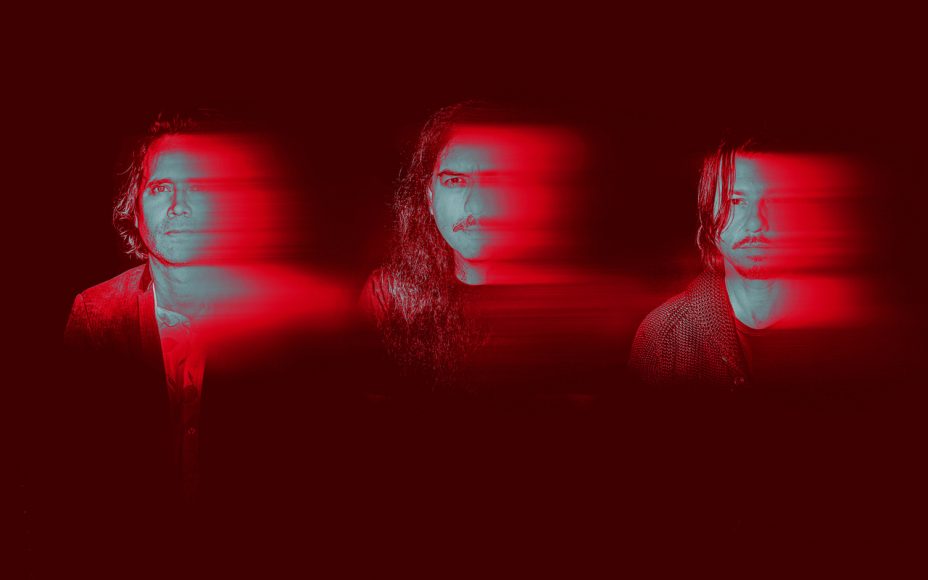 It’s tempting to think of Secret Machines’ self-titled album as the beginning of the end for the band’s first chapter — a heady, largely overlooked hint of the decade-long slumber they’d slip into two years later. After all, the circumstances surrounding the record would test the resolve of even the most tight-knit bands.

In 2007, co-founding guitarist Benjamin Curtis — who passed away from a rare form of lymphoma in 2013 — left his brother Brandon and Secret Machines’ stellar drummer Josh Garza behind to focus on his new project School of Seven Bells. The saving grace of Benjamin’s departure from Secret Machines despite two buzzworthy albums and years of electrifying live shows together, however, was guitarist Phil Karnats. A fellow Dallas native who played alongside Brandon and Benjamin in the psych-pop band Tripping Daisy, he wasted no time falling into place alongside Josh’s lead-footed rhythms and Brandon’s sinewy, rip-roaring hooks.

Or As Pitchfork wrote in its review of Secret Machines nearly 15 years ago, Karnats’ robust, laser-focused riffs lock right into “the group’s menacing melodies and pulsing beats” for 48 winding minutes, “lending even relatively short tracks… the feel of epics.”

Here’s the thing though: Secret Machines’ original label (the Frank Sinatra-founded Reprise Records) never quite got the group. Warner Brothers’ way of supporting the trio’s powerful sound in the four years between their breakout debut (2004’s Now Here is Nowhere) and the Secret Machines sessions wasn’t to try and wrap their heads around it. They’d rather boost the band’s studio budget until it burst and hope a hit would emerge from the ether.

That is until they heard Secret Machines’ third album. Reprise was so perplexed by the bold LP they immediately hit the brakes and refused to promote it. “One particular guy epitomized the vibe,” explains Brandon. “He was obviously unhappy with the record, but the way he communicated his feelings was so convoluted. He asked us to make changes, and as I expressed our willingness to discuss any ideas he may have, he just kept saying ‘no.’ I’m not sure what he was even saying ‘no’ to!”

“At that point,” adds Josh, “the writing was on the wall. They felt like they’d given us a chance and were really upfront. So we asked them to give us the album and they were like, ‘Sure, take the album; no harm, no foul.’”

Reprise’s eagerness to cut their ties from Secret Machines led to a rushed, ill-fated deal with World’s Fair Label Group. While it had already worked with such reputable artists and imprints as Rough Trade, Jarvis Cocker and Daptone, the part-time PR company shuttered its own label right in the middle of a Canadian tour that was supposed to support the band’s self-titled record. A record it hadn’t bothered to officially release, mind you.

“People didn’t even know the album was out,” says Josh. “Things got really bad from there and started leaving a bad taste in our mouth. Our problem was never with the music, though; it was with the business itself.”

The good news about Secret Machines’ DOA status is that it’s finally being released as it was originally intended. Much like a long overdue director’s cut, it now features a dynamic sequence that makes far more sense in the long run than the original and boasts the added benefit of hindsight and a renewed sense of purpose within the group’s widescreen back catalog.

Rather than spark the record’s proceedings with the candy-laced chords and immediate hooks of “Atomic Heels,” the power trio now knocks our jowls back like a Maxwell ad with the jarring opening of “The Fire is Waiting.” It’s as if they’re daring us to step one foot closer, only to reward our patience with a subtle recorder pattern from glam-rock demigod Tony Visconti and a windswept, 11-minute sequence Phil rightfully describes as “like being swallowed up by an indomitable, mountainous wave, bated breath and an inevitable end.”

Bringing the record into full relief are crisp remastered recordings by Slowdive drummer Simon Scott, and tracks that have taken on a new life in 2022 — from the torn space-time continuum of “The Walls are Starting to Crack” to the simmering intro and gleaming, rigid groove of “Have I Run Out.”

“In keeping with the themes of this album,” says Brandon, “chaos prevails….”