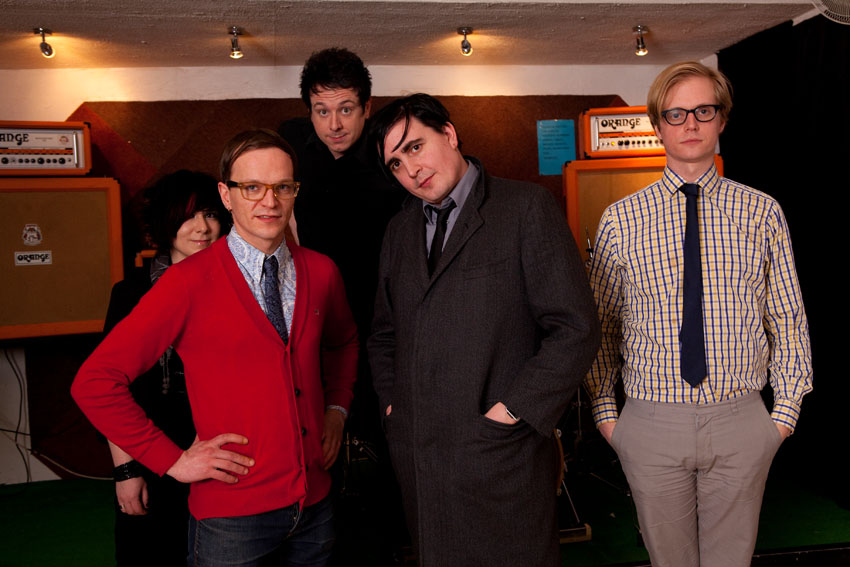 The confident and confrontational Art Brut return with their new studio album “Brilliant Tragic!” on May 23rd. The first single “Lost Weekend” is released the week before on May 16th.

Again produced by Black Francis but unlike its predessesor “Art Brut vs Satan”, which was recorded in under two weeks, Brilliant Tragic’s writing process was a lot more intense than usual, as Eddie Argos explains “with the last album we met up every couple of months and wrote three or four songs. This time we got together in the second half of the year and wrote whenever we could 2 or 3 times a week. We had more time in the studio this time too (about a week more) so Black Francis had time to teach me how to sing.” and “I’m very proud that I sing on it. Only took four albums to start singing, not bad.”

Tuneful and truculent Art Bruts albums have always gone for straight forward titles “Bang Bang Rock And Roll” did what it said on the tin, “Its a Bit Complicated” was a bit complicated, On “Art Brut VS Satan” we had a fight with Satan. This one follows the same pattern it is a Brilliant! Tragic! record. If it was a TV show you’d define it as a Dramedy.” When asked how Brilliant Tragic differs from previous opus’ the eradite Eddie Argos explains “Well I sing on this one, Ian has a new pedal, Fred sings backing vocals for the first time and we let Jasper play a guitar solo (only on two strings though). Also, with the writing for the last album I really enjoyed writing about Mundane things trying to make them exciting. There were songs about riding buses, summer jobs and having songs trapped in your head. This time the album is more about how I think I’m psychic, songs for my funeral, the principality of Sealand and Axl Rose. Weightier topics I think. I’m also sexier now”…..” Also with the last album we’d just remembered we were a punk band again so it was all four to the floor rock out. This time there are a few songs to let you catch your breath so when we do rock the fuck out again it hits home harder.”

“Brilliant Tragic!” exceptional artwork has been created by Jamie McKelvie, a comics creator best known for his work on Phonogram: Rue Britannia. The artwork is unveiled at the bottom of this press release.

Art Brut have also linked up with PledgeMusic to offer fans an exclusive download and extras with “Brilliant Tragic!”. An exclusive new track “Unprofessional Wrestling” is available now as a free download on www.pledgemusic.com/artists/artbrut/widgets/972

While the extras available for fans via PledgeMusic include signed screen prints of the album artwork, exclusive t-shirts, Art Brut Karaoke with Eddie, plus an opportunity for fans to have Art Brut perform at their very own party. Also, anyone purchasing “Brilliant Tragic!” through PledgeMusic will be helping UNICEF Art Brut’s nominated charity. Full details on the Art Brut bundles can be found at www.pledgemusic.com/projects/artbrut

To celebrate the release of “Brilliant Tragic!” Art Brut will be taking up residency at Lexington in London starting on Monday May 30th and finishing 5 nights later on Friday June 3rd.

Art Bruts plans for the band for 2011 are “same as always, tour everywhere we possibly can, rock out, write songs.”