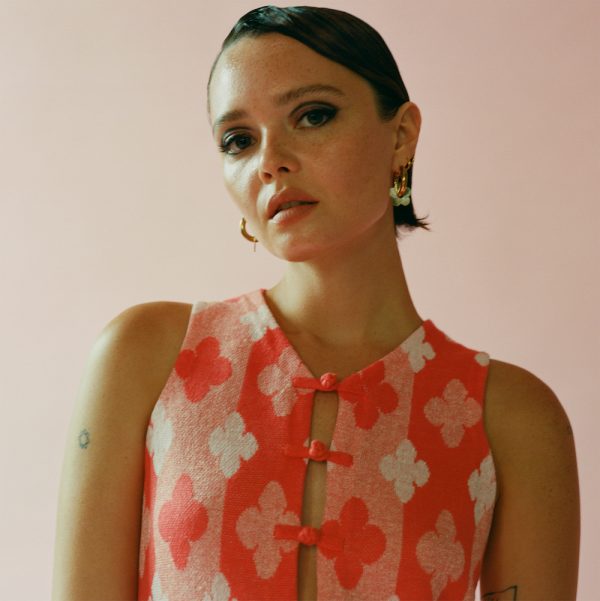 The very first sound you hear is a doubled, drifting vocal calling out the name of early aughts teen movie star, Hayden Panettiere. A garage trio slams in, and from the first minute of Charlotte Rose Benjamin’s debut album, Dreamtina onward, we are on a journey somewhere between desperate and audacious, yet sunny as a Beach Boys record.

“Dreamtina is the beautiful girl with the cool outfit you see on the subway or at a coffee shop,” Benjamin explains, “she’s my cross to bear and my altar ego.” As a Gen Z/Millennial cusp it makes perfect sense that Hayden Panettiere would be an early informant of Benjamin’s concept for Dreamtina, but the humor and specificity in naming the opening track after the head cheerleader from the Bring it On franchise is where Benjamin really shines as a writer. Her lyrics can be startlingly honest at times and shamelessly pleading; take the 90’s alt rock inspired track “Cumbie’s Parking Lot,” in which she begs for someone to “take pictures of [her] and post them on the internet.” Or in “satisfied,” a track with a Moldy Peaches campfire style earnestness hijacked by a Weezer-like gargantuan hook, in which she recounts a story about a recent ex boyfriend accidentally showing up to one of her shows. Dreamtina’s funny moments bring depth and self awareness to its more serious notes. In “Deep Cut,” an intimate dance of waltzing guitars and delicate melancholy, Benjamin confesses that she’s “built like a strainer, a useless container” and it becomes clear that Benjamin writes because she has to. You get the feeling that funny or sad, we are listening to her catharsis.

The execution of the record was just as natural. Benjamin and the band produced the album themselves in drummer/engineer Matti Dunietz’s basement studio in Ridgewood, Brooklyn and at her musician father’s ramshackle home studio on Martha’s Vineyard where she grew up. “My life changed and my music got so much better when I met Matti Dunietz and Nardo Ochoa. We made the album completely on our own with my lifelong best friend/bassist, Zoe Zeeman. I felt so free.” She continues, “we’d reference different sounds, but we had very few conversations about genre or branding. It never felt like we were trying to mimic something, we were just building off of the songs I wrote in my room. I’ve had a lot of blind date style sessions with producers in the past and there’s always a conversation about what’s working in the industry and how we should try to make something that sounds like something that’s succeeding. I absolutely hate that approach.”

Benjamin’s debut EP, Party City (2020), was released with Moshi Moshi/Neon Gold records. It received airplay on BBC 6 Music and BBC Radio 1 with Jack Saunders making the title track his ‘Next Wave’. Party City also received praise from Clash Magazine and Blackbook Magazine, and was featured on Spotify’s Global New Music Friday playlist. The same year, Benjamin performed background vocals on Gus Dapperton’s 2020 album, ORCA, and starred in videos for his breakout hits “I’m Just Snacking” and “Post Humorous.” In 2019, she played as tour support for Houndmouth and was later set to share the stage with Nasty Cherry and Role Model at SXSW before the festival was cancelled due to the Covid19 pandemic. Benjamin also counts The Flaming Lips’ Wayne Coyne as a fan and frequent social media supporter. Her latest releases, “deep cut” and “Cumbie’s Parking Lot” received praise from YouTube critic David Dean Burkheart and were both featured on Spotify’s Fresh Finds: Indie playlist for more than 10 weeks.

For her debut album, Benjamin chose to go without a label, which, she says, “is an amazing amount of work and money, but I made absolutely no compromises and I’m prouder of it than anything I’ve ever done before.” Benjamin was able to pay for photoshoots, music videos, vinyl and merch by working as a model in New York. Her thrifty sense of style caught the attention of an editor of Marie Claire Magazine in 2019 where she was featured in the What I Love about Me section of their February issue. In early 2021, she was cast in a campaign for Ralph Lauren, which funded most of the album. “The biggest nod of approval,” she boasts, “was when Chanel sent us clothes for the press photo/cover shoot.”

Benjamin states that In this record she’s exploring her own identity through romantic relationships. “The ‘Dreamtina’ concept is kind of a study on wanting to be desirable. I’ve never felt like the cool girl at the party. As far as I’m

concerned, romantic love is the most important and exciting thing in the entire world. I still feel like a teenager in that way.”

“Satisfied” is a standout on the record. “I was really into this boy I had just started seeing, I was sure he was about to be my boyfriend,” explains Benjamin, “I invited him to this house party in Bushwick that my band was playing at and two days before the show he broke up with me. And then he showed up to my show accidentally! He genuinely didn’t see the poster and thought he was just going to a house party. It was so funny and sad and stupid I had to make it a song.” The video for the song is equally as literal. Benjamin teamed up with her brother, Sam Benjamin to re-enact the story with papier-mâché dolls the two made themselves. “As if writing a song that is basically just a play-by-play of what happened wasn’t psycho enough,” Benjamin laughs, “to really drive home the point, I also made it into a puppet show.”

Another single, “Slot Machine,” is a stream of consciousness light-hearted confessional Sunday-morning-strolling-through-a-New-England-Beach-town kind of song about unrequited love, visiting your hometown, and what it feels like to have been born in 1996. Benjamin sings, “I think I learned the truth at 17/ How to breathe underwater like a submarine/And if I let you play me like a slot machine maybe I’ll win sometimes.” It’s maybe the only song that takes you out of Dreamtina’s home New York City setting. Benjamin grew up as a year-rounder on Martha’s Vineyard. “I think there’s a waspy country club vibe that comes to mind when people hear that I’m from Martha’s Vineyard,” says Benjamin, “that definitely exists, but most people who are privileged enough don’t choose to live there in the off season. Our lifestyle was much more bohemian. My parents are both artists and found their own ways to cater to people who are there for three months out of the year. I always identified more with the towny girls from the movie Mystic Pizza. I had a wonderful childhood, but living on an island can be incredibly isolating.” Though Benjamin admits she harbors some resentment for how sheltered she felt, she takes her hometown with her in her music, “My music has changed so much since I left, but I think I’ll always have a little bit of a twang in my writing because of where I grew up.” Benjamin teamed up again with best friend and frequent collaborator, Hlif Olafsdottir to shoot the music video which takes place on the Williamsburg Ferry, a Chinatown Arcade, a Dime’s Square dive bar and their favorite downtown karaoke spot.

Dreamtina is bookended with “Louis” and “Louis Pt. 2” which features fellow bandmate, Nardo Ochoa’s project, Panther Hollow. “Louis” isn’t based on anyone specific. Louis is a name to put a face to those recurring feelings of inadequacy. “I’d slit my own throat just to make an impression,” Benjamin half yodels in the second verse. But there’s also a bit of skepticism — “Last time I saw Louis he broke his own heart, cut it up on the table, was calling it art.” “Louis Pt. 2” feels more forgiving and sentimental. After a climactic bridge harmonizing with Ochoa who also co-wrote the song, Benjamin’s voice gets quiet, admitting “I only wanna die for your attention Louis.” The video for “Louis” features Benjamin singing along to the song from the backseat of a red mustang convertible driving around New York City. It was shot by Giullian Yao Gioiello. The video for Pt. 2 is a montage of home videos from Ochoa and Benjamin’s childhood. “The Louis Pt. 2 video makes me surprisingly emotional,” Charlotte admits, “Nardo pointed out that it highlights traditions across time and space. There’s footage of each of us blowing out birthday candles, singing songs, and a lot from my parents’ wedding. I love that at the end of the album you’re left with this final more solipsistic, introspective thing that reflects identity without leaning on romantic relationships and focuses more on friends and family.”

Benjamin simply hopes people hear themselves in this record. “I want these songs to be a weighted blanket to crawl into bed with or a friend in your ear while you run errands or drive to work.”