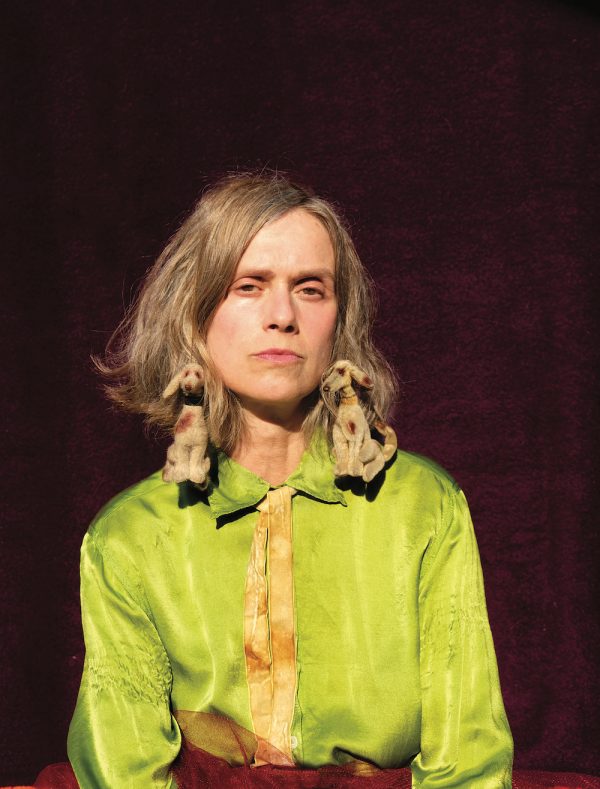 A master of mysterious experimental pop, Juana Molina is recognized as one of the most original and visionary artists around. Her career trajectory has been a unique one, from her initial success as a massively popular comedic actress in her native Argentina, to the abandonment of her television career in 1996 and her decision to devote herself to forging her own, inimitable style of music, which gained her worldwide recognition as a critically-lauded recording and touring artist

Juana Molina grew up in a musical environment. Her father, revered tango singer and composer Horacio Molina, gave her guitar lessons from the age of five. Her mother, actress Chunchuna Villafañe, is a committed music lover who initiated Juana to the secrets of her extensive record collection. Following the military coup of 1976, the Molina family fled the country and lived in exile in Paris for six years. During those formative teenage years in Paris, Juana’s outlook on music was vastly expanded by being exposed to music from around the globe.

When Juana returned to Argentina she was determined to become independent and to pursue a career in music. Like so many other 20-somethings, Juana’s career aspirations were “to earn a good salary for working just a few hours”, in order to keep free time to develop her musicianship. She knew she had a gift for doing impressions, and went to pass an audition for a TV program. She got hired on the spot. Her popularity rose meteorically and, three years later, she had her own comedy show, ‘Juana y sus hermanas’ for which she invented & impersonated a series of  hilariously stereotyped characters. The show was a great success, it was syndicated throughout South America and, within just a few years, Juana had become the most popular comedian in Argentina.

After taking a break from the show to give birth to her daughter, she chose to cancel her television show in 1994 and instead launch a music career. In the face of much skepticism, Molina debuted in 1996 with ‘Rara’, which to fans of her comedy career seemed like just another celebrity vanity project. In spite of its high quality and originality, fans and critics in Argentina seemed unwilling to support her new career and she subsequently moved to Los Angeles. Honing her craft in a more supportive climate, she began experimenting with electronics, loops, and production, recording the tracks that would eventually make up her second album, ‘Segundo’.

Despite these initial difficulties, Juana held out and stuck to her decision. Her passion and commitment to music prevailed, and worldwide recognition began to grow. After the release of her second and 3rd album (which came out on Domino Records, as did the next two), she quickly became the darling of the international indie/electronic/folk scene, and praise began pouring in from admirers in all corners. ‘Tres Cosas’ was placed in the Top Ten Records of 2004 by The New York Times, she was championed by the likes of David Byrne and Will Oldham, and her music — which, although it features elements of folk, ambient and electronica, is highly unique and personal— was often lazily compared by critics to that of Björk or Beth Orton. But, as the New York Times put it, “Ms Molina doesn’t imitate anyone. She has too much fun just being herself .”

After four albums with Domino, Juana Molina joined the Crammed roster in 2013 to release her formidable ‘Wed 21’ album. Crammed subsequently reissued her previous albums on digital. Her seventh album, 2017’s ‘Halo’, was recorded both at home and in Texas at Sonic Ranch Studios. Hypnotic and inventive, Halo continued to straddle Molina’s strange divide of off-kilter electronic pop and organic songwriting, and was hailed by the media as her best record so far.

In 2019 Juana released ‘ForFun’, a joyful EP with 4 of her songs re-arranged and performed in a punkish mood. Juana Molina’s latest release is ‘Segundo (21st Anniversary Edition)’, the remastered reissue of her breakthrough album. She also features on the upcoming album by Congotronics International (the supergroup she formed years ago with Deerhoof, Kasai Allstars, Konono No.1 & others), to be released on April 29, 2022.

“Like Brian Wilson or Kevin Shields, she pulls off the most out-there material with melodies nearly as accessible as conventional pop” (Rolling Stone, US).

“One of the most extraordinary singers around, veering on genius” (Sunday Times, UK),

“She is creating a slippery soundtrack for the subconscious” (Spin, US)

“Essential for all humans in planet Earth” (Wire, UK)

“Halo is her strongest LP. She wields a sonic palette refined by two decades of experimentation to create a narrative defined not by words, but by mood” (Pitchfork)

“Dips deep into the unknown and brings back unexpected brilliance” (MOJO, UK)