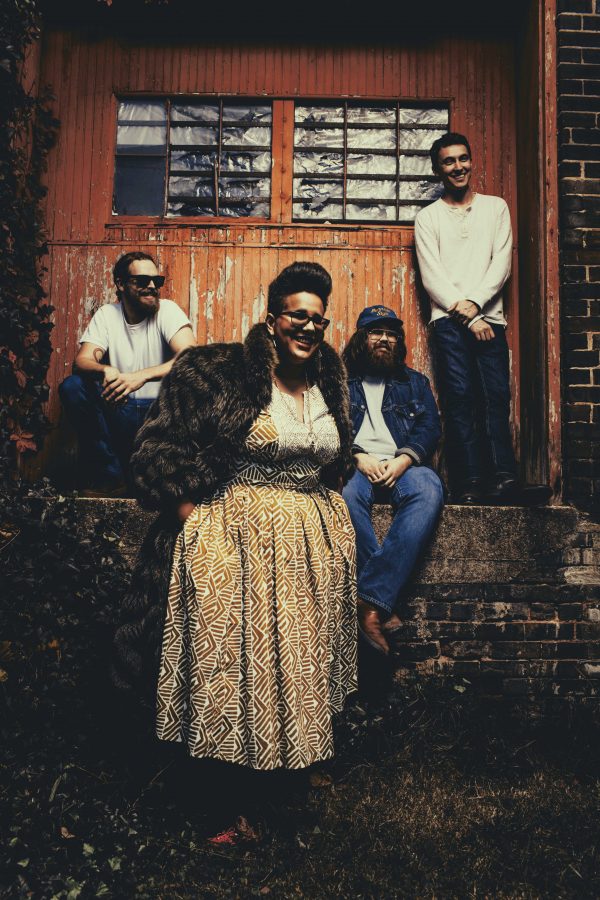 “We took our time to write this record, and I’m really glad we did,” says Brittany Howard, lead singer and guitarist of Alabama Shakes, about the band’s new album Sound & Color. “We were able to sit down and think about what’s exciting to us, explore all the things we wanted to on our first album. This record is full of genre-bending songs—it’s even harder now when people ask, ‘What kind of band are you?’ I have no clue.”

Sound & Color is the eagerly anticipated follow-up to the Shakes’ 2012 debut Boys & Girls, which earned the group three Grammy nominations, including a nod for Best New Artist. The gold-certified album’s breakthrough paved the way for the Shakes—Howard, guitarist Heath Fogg, bassist Zac Cockrell, drummer Steve Johnson, and touring keyboard players Ben Tanner and Paul Horton—to become one of the most celebrated live acts in the world, as they delivered unforgettable performances everywhere from Saturday Night Live to the main stages of such festivals as Bonnaroo and Glastonbury.

“There was definitely a slight wave of pressure after that success,” says Fogg, “but everyone was really on the same page about letting that pass and making the record that we wanted to make, trying to be creative and free and not limit ourselves.”

The album’s twelve songs reveal a band honed by years on the road, and drawing from a wide range of influences. The bluesy groove of “Shoegaze” or the garage-rock freak-out on “The Greatest” give way to the psychedelic space jam “Gemini.” The gently swaying, chiming title song opens the album with what Howard calls “more of a visual thing, I think of this whole scene going on,” then explodes into the urgent, tightly-coiled funk of “Don’t Wanna Fight.” Long instrumental intros and passages create hazy atmosphere, and then the intensity of Howard’s vocals snaps everything back into riveting focus.

She explains that there were a few specific recordings that were touchstones for Sound & Color. “The Superfly soundtrack, Gil Scott-Heron’s music and how minimal it could be, David Axelrod—not so much wanting to sound like them, but all of their attention to small details. With ‘Gemini,’ I thought about how the Temptations used to write pop songs, but then got really far out on ‘Cloud Nine’ or ‘Psychedelic Shack.’ I imagined myself in the situation of the African-American groups in the ‘70s, when synthesizers had just come out and they were making all of this moody stuff.”

“Ever since Boys & Girls came out, we’ve tried really hard to not give in to media or public definition of what we should be,” adds Fogg. “So those kinds of influences have been there all the time, but this record pushes them to different extremes—before, if we had a more contemporary R&B feel, it was more hidden under a classic vibe, but it’s separated a little more drastically on this one.”

The songs were written during breaks in the grueling touring schedule of a young band, sometimes by the members together and sometimes by Howard working alone at her home studio. She notes that there were several dedicated writing periods during the past year, but that “sometimes I wasn’t dedicating enough time, so I’d binge-write, sit in the basement and work for 18 hours for five days straight.”

When the Shakes began recording at Nashville’s Sound Emporium studio, Blake Mills—a young guitar wizard who has previously helmed sessions by Sara Watkins and Sky Ferriera, and played alongside everyone from Norah Jones and the Dixie Chicks to Lana Del Ray and Kid Rock—came on board as a co-producer to help harness all of the different ideas. “Blake really helped bring out our confidence, and our comfort in being ourselves,” says Fogg, while Howard adds that “Blake has really strong communication, and the ability to light a fire under your ass.”

Fogg says that the recording of “Gimme All Your Love” was a pivotal moment on Sound & Color. “That was one of the earlier songs we did, and it hit a lot of different chords,” he says. “A lot of songs branched out from that one—it’s
a hard-driving R&B song, but there’s a time change midway though, effects on Brittany’s voice, different extremes that were explored.”

Other tracks took a more circuitous route. “The Greatest” began as a ballad, but when it wasn’t clicking, Mills suggested that the band speed it up to punk-rock tempo. “Future People,” says Howard, “started as an experiment with native African rhythms, and then went into something like a dream sequence, and then turned into these children’s-group vocals.

“It really turned into each song having its own goal,” she continues. “With each one, it was like, ‘This sounds like “The Man Who Sold the World”—let’s explore that.’ Each song was transforming into something else.”

Sound & Color also demonstrates the tremendous strides made by a group of musicians who had only been playing together for a few months when they recorded their first album. “These songs are not simple,” says Howard. “They’re intricate, like a spider web or a tapestry. Our drummer, Steve, has put in a lot of work, gotten so much better—we all have.”

“Everybody has really advanced on their instruments,” says Fogg. “Brittany’s vocals have gotten so much stronger, she’s able to do more things than she even knew she could.”

“I feel like I’m capable of anything,” the singer responds. “It took a lot of patience to make this record, and to communicate so well with each other. I know now we’re the kind of band that can do that.”

With Sound & Color, Alabama Shakes prove that the response to Boys & Girls was no fluke. Expanding on the soulful blues-rock base that made their name, they defy predictable expectations and map an exciting, surprising, and innovative new direction. As they prepare to return to the road, what shines through is a sense of pride and self-assuredness—feelings not often associated with the always-tricky sophomore album.

“We really thought about what record we wanted to make, and decided that we didn’t want to do something like Boys & Girls, Part Two,” says Brittany Howard. “We’ve grown a lot, learned a lot about music, listened and thought about a lot of things—about being minimal and tasteful, keeping it classy. After that decision to start over, with a clean slate, it was easy. We could just do what we wanted to do.”