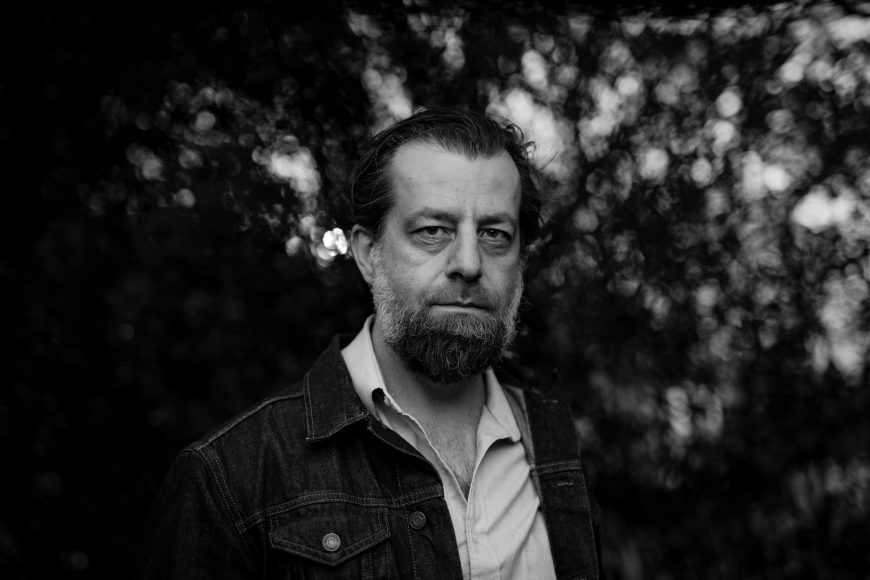 “This album was truly a risk and a chance encounter. It played out like a spring storm in Eau Claire, Wisconsin.”

About half-way through the recording of Sean Rowe’s excellent new album, The Darkness Dressed in Colored Lights (Fluff & Gravy Records), he and producer Troy Pohl were taking a break. They were holed-up in Eau Claire, Wisconsin, working at Brian Joseph’s studio, Hive, which is situated on a remote acreage of rolling green hills. While catching their breath, they noticed a minivan that had turned off of the rarely traveled road adjacent to the property and onto the grass, driving straight towards them. It pulled so close that it almost touched the picnic table. A stout and somewhat menacing man emerged, who did little to calm suspicions when he spoke.

Rowe, thinking that’s exactly the kind of thing someone might say before murdering you, replied, “I actually have. Have you?”

“Stupid Human Tricks — I could pour two beers at once without using any of my appendages.”

Troy and Sean nodded in recognition and without another word, the man climbed back into his minivan and drove off. As he was pulling away, Brian Joseph came sprinting across the yard to see what was happening. They recounted the head-scratching tale of their brush with a minor celebrity and after some failed attempts to make sense of it, went back to the business of making a record.

A blessing and curse of a curious mind paired with a sense of adventure is that one becomes a collector of stories. Some, like this, play out over the course of a few minutes while others, more profound and complex, take years to untangle. Rowe, an artist and nomad at heart, has made himself into the perfect repository for spun yarns of every variety — hysterical, terrifying, heartbreaking, mystifying, and ridiculous — and on this record, he makes it clear that at some point it’s hard not to feel them all at once.

The album’s title is taken from its first single, “To Make It Real.” “All this darkness, dressed in colored lights. Everything is wrong but you look so damn beautiful tonight.” It’s a relatable couplet that illustrates the paradox between what once was and what now is, while the chorus howls in response to being lost in the inbetween. “When you lose your way, when you lose your face, when you’re paid in full for what you used to steal. When you lose that love, when you lose your mind, well then oh my God, you make it real.”

While “To Make It Real” was forged from the despair that comes from losing yourself to heartache, “Little Death” recognizes that both in spite of and because of such events, it’s possible to find yourself again. Here, Rowe brushes off the dirt and looks ahead to the freedom of only being accountable to oneself. “A little death, it won’t kill us after all and that’s fine. When you ain’t there, you ain’t there to feel all that pain.” In the chorus, he lists some of what he’s looking forward to. “I’m gonna write a song, gonna phone a friend. I’m gonna fall in love with the road again. I’m gonna wrap my arms around her waist. Work me Lord and wash my sins. I’m gonna fall in love with the woods again. Fix that sorry shape I’m in.”

Rowe opened up about some of the work he’s been doing to build a fitter, happier version of himself. “The heaven and hell that swirls around in our head — to a large extent, we make both. So, in realizing that, you begin to realize that you have the ability to decide which one you’re gonna make.” Rowe credits therapy and a guided ayahuasca retreat with helping him to reach this understanding.

“Over the course of an intense weekend, I had three profound experiences that stripped away all of my defenses and rationalization, along with the guilt and anger that built up over the course of being a human. Two of those experiences brought me to a place of such intense beauty and peace, while the third showed me the exact opposite. I think that the lessons learned over that weekend are still being revealed but in those moments, I seemed to experience real heaven and hell. Now it’s up to me to choose which one I want to exist in.”

The Darkness Dressed in Colored Lights is ripe with both dimensions. It was produced by Rowe’s friend and longtime collaborator Troy Pohl, whom he has known since he was in his early twenties while Pohl was still a teen. The two grew into their professionalism together and here, they make the most of their combined ambition and experience.

The studio Hive in Eau Claire, Wisconsin was chosen so that they could work with the Grammy-winning engineer, Brian Joseph (Bon Iver) and for its proximity to a group of musicians that Sean came to admire while listening to Anna Tivel’s remarkable album, The Question, in his manager’s basement studio. That group includes drummer/percussionist, and producer Shane Leonard, along with Jeremy Boetcher on bass, and Ben Lester on keys and pedal steel. Courtney Hartman was flown from Colorado to provide background vocals and guitar. Chris Carey provided additional bass, while John DeHaven, Jeff Nania, and Joel Yannuzzi made up the album’s brass section.

Rowe’s admiration for Tivel’s album was not limited to its sonics. The Portland, Oregon label Fluff & Gravy Records, which has released all of Anna Tivel’s albums, is home to The Darkness Dressed in Colored Lights, which will be released on CD and double-vinyl, as well as available on all streaming services on October 8.