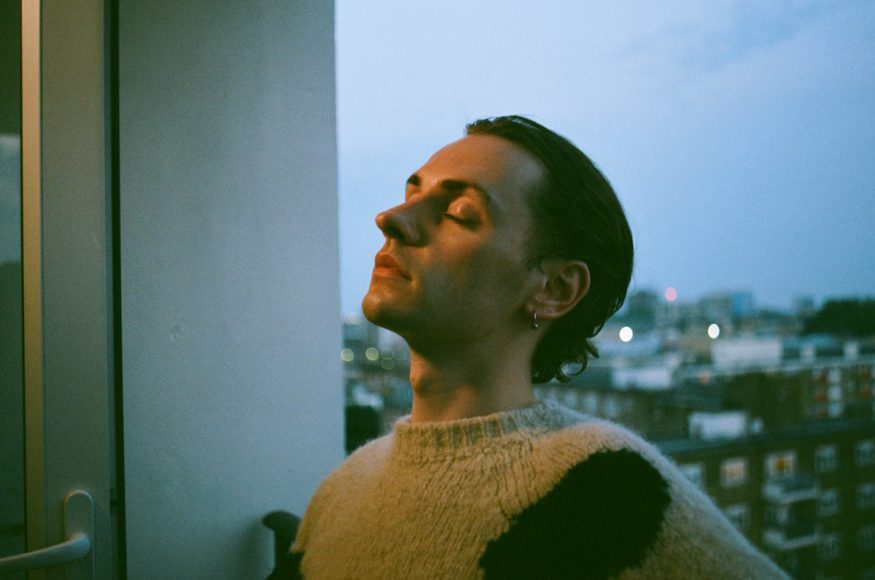 Jacob Allen knows a thing or two about the transition from darkness to light. It comes with the territory, really, after ten years of crippling insomnia: long nights spent staring into the ceiling and waiting for dawn to slowly creep in under the crack in his curtains. “For literally a decade, I just couldn’t sleep,” says the cult-acclaimed London songwriter/producer, best known as Puma Blue. “I don’t know what it was. But I’d often turn to music on those sleepless nights, quietly writing songs to pass the time. It turned out to be pretty useful: there are pretty big revelations to discover about yourself at four in the morning.”

This nightly ritual certainly helps explain the hazy, nocturnal and deeply intimate sound of the early releases, often described as “voicemail ballads”, that propelled Puma Blue to prominence, but there’s something brighter about the soul-searching sound of his debut album, In Praise Of Shadows, that suggests a new found clarity to his reflection. A delirious dreamland of soulful vocals, D’Angelo-ish guitars and muted electronic beats, its fourteen tracks are a contemplation on “the balance of light and dark, the painful things you have to heal from or accept, that bring you through to a better place” says the 25-year-old. “It’s about finding light in darkness – and realising that it’s what got me here today.”

“Here” is an exciting place to be right now for Puma Blue. The last three years have been a whirlwind of success for the rising star: since releasing his debut single ‘Want Me’ in May 2017, he’s amassed over 50m streams worldwide and been championed by everyone from music press staples The FADER, Dazed and Complex to K-Pop behemoths BTS. There have been two EPs, a live album, a couple of sell-out North American tours and triumphant, packed-out shows in front of adoring audiences across the UK as well as in Paris, Tokyo, Amsterdam, Seoul and Berlin to name a few. Not bad going for someone who stumbled into acclaim more out of necessity than desire. “I thought maybe I could be a drummer in a band. I never really meant to wind up as a solo artist,” he laughs now. “I just sort of…fell into it.”

Raised by musician parents, a lot of his early memories are of long car journeys spent “lost in music in the backseat,” captivated by their collection: Stevie Wonder, Aretha Franklin, The Police, Pink Floyd, and everything in between. For his seventh birthday, his parents bought him a drum lesson and soon he was forming bands with school friends. Picking up a guitar came more from the need to articulate the ideas swirling around in his head than from any showman-like tendencies but soon he was engrossed in chord books.

By University, his musical education advanced by teenage obsessions with Radiohead, Björk and Jeff Buckley, he was putting on DIY shows with friends around south London, not out of some entrepreneurial spirit but in response to the basic need to have a place to perform the songs he’d started writing – limitation-less lullabies that let all his influences spill out without a care. “I was trying to write music that was unpretentious and just true to myself – an unapologetic mix of all the music I love, from my favourite hip-hop producers to John Frusciante and Björk.” Local acclaim from these DIY nights soon turned into a bigger spotlight. Using an artist name inspired by the “superhero-esque double barrelled aliases of delta blues musicians”, Puma Blue released his first EP, Swum Baby, in June 2017. It marked out the songwriter as an affecting chronicler of unrequited love and inner turmoil whilst 2018’s Blood Loss EP built on those promising beginnings to deliver even more evocative melodies and soul-dripped seduction.

In Praise of Shadows, though, marks a new era. “There’s more brightness and clarity with these songs,” Allen says, and there’s a clear reason for that shift. “Since being with my partner I’m finally sleeping well and making up for all the years of sleep I lost” – it’s a transformation captured in one of the albums most personal tracks, ‘Sheets’, which borrows a sample from the score of Michel Gondry’s Eternal Sunshine of the Spotless Mind and repurposes it as a lilting love-song. “I came from the sea, saying “what can i offer?” she told me just forgive yourself. Her skin lets me sleep” sings Allen over Jon Brion’s gently undulating string arrangements. It’s a moment that almost didn’t make the final cut, “I wasn’t even sure about putting it on the album for a while…it feels like a really personal note that you’d leave in the house to be found when you’ve got to head out early.”

The songs are still intimate – a product of his home studio set-up. “My guard is down when I write and record at home. I don’t shelter from my feelings.” He can say that again. In Praise of Shadows is astonishing in its openness, from pure love-laden soliloquies such as the aforementioned Sheets or the lazy groove of Already Falling to bittersweet reflections on past relationships, “I never learnt to cherish her” Jacob laments on Cherish (furs). Nowhere is this openness more apparent than on Velvet Leaves – a crisp, hip-hop beat-propelled meditation on an incident that still leaves Allen in moments near panic attack. “5 years ago, my sister was in a really bad place and one day we nearly lost her. By the grace of the universe she survived. The song is just a reflection on that day and how we came together as a family and on the veil between death and life and the toxic masculinity that had a hold of me when I couldn’t or wouldn’t express myself at the time.” The beat and the lyrics came in the same session. “It was one of the songs that just fell together, and just means so much to me now.”

This openness is inspired by the artists Allen loves. “The music I like is really personal. I love it when an artist can open their soul a bit and let you wander around in there. So I try to be just as vulnerable.” Musically, there’s realness, rawness and fragility, too. “I’d say my production purposefully isn’t meant to sound glossy for the same reason. Half of it sounds stuck together with Sellotape,” he laughs, but it’s a sound born as much from necessity too. Written over the last two years, with Jacob travelling constantly, either on tour or else splitting his time between London and Atlanta – “I wrote and recorded a lot at my girlfriend’s flat in Atlanta whilst we were still doing long-distance and I’d come visit her for a month at a time” – In Praise of Shadows is an album built from laptop demo’s drafted in coffee-shops, hotel rooms and plane journeys.

Lyrically, it’s clear that the maturity and lucidity with which Allen deals with his demons and celebrates beauty across his debut album has its roots in his newly nomadic lifestyle too. His blossoming romance and burgeoning career have forced the previously bedroom-bound songwriter out into the open and driven him to find a new perspective on loss, lust, love and everything in-between whenever he does have time to stop and reflect – a theme referenced on closing track Super Soft “if we could be still just for a minute”, the album’s final refrain.

It’s a striking listen destined to take Allen to exciting new places. The Londoner isn’t getting caught up in all that, though: his ambitions for the record are simple. “I just hope it can be useful or soothing for some people,” he says, adding that maybe it can help out others, on their insomniac nights. Soulful, vulnerable and full of beauty, whatever you don’t do – don’t sleep on Puma Blue.