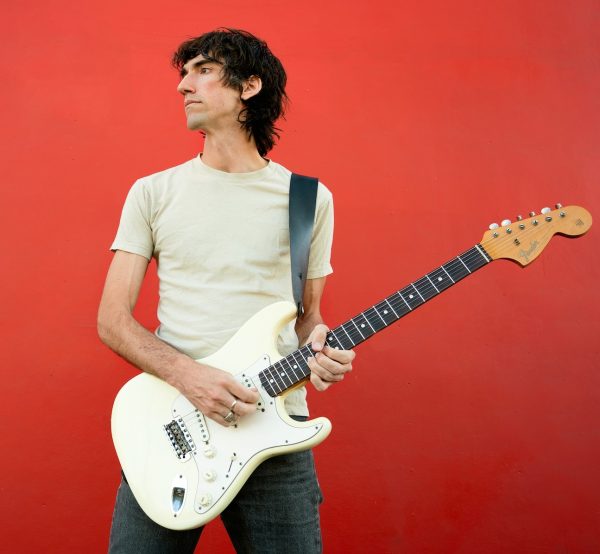 “I’ve spent most of my life trying to escape the sound of the electric guitar,” says Steve Marion. That’s a rather surprising confession considering that, under the name Delicate Steve, Marion has spent the better part of the last decade establishing himself as one of the most wildly innovative and widely revered players in the game. He’s recorded with Paul Simon, been sampled by Kanye West, toured in the Black Keys, and released four critically acclaimed albums of genre-bending instrumental music. He’s your favorite musician’s favorite musician, a virtuoso songwriter, producer, and performer who occupies a lane entirely his own in the modern indie landscape, but he’s never liked the sound of the electric guitar? “I’ve tried everything under the sun to get away from it,” he explains. “Until now.”

Written and recorded on a 1966 Fender Stratocaster that reignited his love for the instrument, Delicate Steve’s captivating new album, After Hours, marks a first for Marion, an earnest, easygoing collection that revels in the simple joys of plugging in and playing. The songs are sweet and breezy here, pairing vintage soul grooves with mesmerizing, wordless melodies, and Marion’s production work is suitably subtle and restrained, stepping back in all the right places to let the album’s masterful performances speak for themselves. In another first, Marion teamed up with outside musicians on the record, bringing in a group of all-star players including renowned bassist Shahzad Ismaily (Yoko Ono, Marc Ribot) and famed Brazilian percussionist Mauro Refosco (David Byrne, Atoms For Peace) to help flesh out the arrangements and stretch his sonic boundaries. The result is Marion’s warmest, most magnetic work to date, an inviting, immediately accessible album that manages to balance thoughtful introspection and carefree bliss in equal measure.

“I wanted people to find comfort in the music, to find a home in it, because that’s what it did for me,” says Marion. “It helped me finally find a home in the sound of the electric guitar.”

Born and raised in New Jersey, Marion first came to widespread attention with the release of Wondervisions, his 2011 debut under the Delicate Steve moniker. The New York Times raved that the album “slyly eludes generalizations,” while NPR hailed it as “the year’s most epic sun-bleached back porch jam session,” and Mojo proclaimed that “whether this is post rock, space rock or ad hoc it’s hard to say, but who needs taxonomy when music feels this good?” Delicate Steve’s 2012 follow-up, Positive Force, was met with similar acclaim, with Pitchfork declaring that “Marion is one of those rare guitarists whose instrument sings in the place of vocals.” In the years that followed, Marion would go on to release two more highly lauded studio albums; record with the likes of Paul Simon, Amen Dunes, and Sondre Lerche; perform live with Yeasayer, Mac DeMarco, Built To Spill, Dr. Dog, and Tune-Yards among others; have his songs sampled by Kanye West not once, but twice; and join the Black Keys on the road as a touring guitarist in support of 2019’s Let’s Rock. If that all sounds like a lot for one man, that’s because it was, and by the time 2020 rolled around, Marion needed to step away from the noise.

“I spent a year living in Tucson, Arizona, where I didn’t play a single note,” he explains. “I didn’t even really listen to music during that time. It was the longest I’d gone without holding a guitar in my hands, but I think I really needed that time away from everything for some perspective.”

It was after this southwestern sojourn that Marion discovered the vintage Fender Stratocaster that would rekindle his romance with the guitar.

“Up to that point, I’d always tried to push the sound of the guitar forward into unexplored territory,” says Marion, whose 2019 album, Till I Burn Up, flirted with experimental electronics and bold sonic manipulation. “But once I got my hands on that guitar, I started to realize that the most adventurous, unexpected thing I could do was just plug it into an amp and play.”

So that’s what he did. Rather than reimagining the possibilities of the guitar as a vehicle for delivering his instrumental pop masterpieces, this time around, Marion embraced it for precisely what it was, adopting a “just play” ethos that allowed him to strip away distraction and lose himself in the music. With Shahzad and Refosco backing him, he found himself feeling more liberated than ever before, leaning into his role as a modern guitar hero with renewed vigor and excitement.

“Recording with people who were at the peak of their instruments freed me up to play in ways I’d never really experienced,” Marion reflects. “They were bringing rhythms to the table that I hadn’t explored before, and the more they pushed me, the more I pushed myself.”

That chemistry is obvious from the outset on After Hours, which opens with the aptly titled “Playing in a Band.” Lush and immersive, the track showcases Marion’s knack for sonic world building, conjuring up its own little universe of swelling tones and swirling colors underneath a lilting, lyrical melody line that feels as effortless as it is infectious. The intoxicating “Street Breeze” evokes the kaleidoscopic sights and sounds of a brisk walk through the city, while the languid “I Can Fly Away” dips into hazy ’70s soul as it learns to harness its own raw power, and the surrealist “Looking Glass” stirs up an air of mystery and restlessness atop a churning, perpetually unsettled groove. Though Delicate Steve’s catalog has traditionally consisted of crisp, tightly constructed songwriting, the tunes on After Hours are more loose and fluid, unfurling in their own time with grace and gratitude.

“This music is the sound of me embracing my strengths rather than hiding from them,” says Marion. “It’s the sound of me finally letting go of whatever hang-ups I’ve had in the past and just doing what comes naturally.”

And in the end, that’s what After Hours is all about. Delicate Steve is done running from the electric guitar. He’s home.