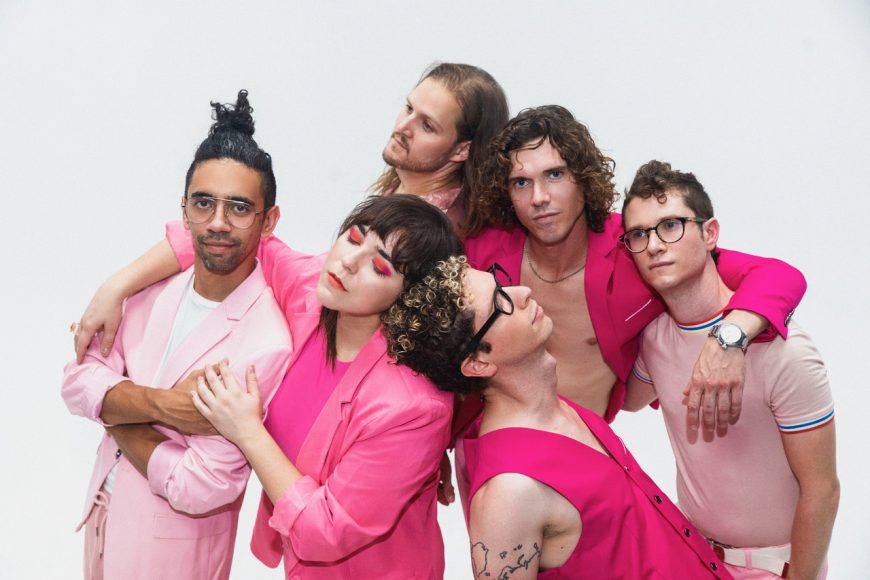 There are six musicians in the raucous pop ensemble Sweet Crude, but their ultimate goal is duality. The lyrics are bilingual, with French and English lyrics sometimes sharing space in one song. As a gang of bodies in motion onstage, their clamor of percussion and shouts whips up the dance floor in contagious physical joy – but the tunes lend themselves as well to deep listening, revealing complex layers of both craft and content. Of course, there’s the band name itself: a reference to the petroleum export of Sweet Crude’s home state of Louisiana, an unintentionally poetic linking of two concepts operating in seeming opposition. And like the title of Sweet Crude’s latest album – Officiel//Artificiel – when everything comes together, the product is more than the sum of the parts.

The choice to write and sing in two languages came as members were still learning French – specifically, Louisiana French, the regional vernacular that was once commonly spoken in the Southern part of the state by descendants of antebellum immigrants. A push to “Americanize” the area’s diverse culture after World War One had led to strict English- only rules in public schools. Louisianians of a certain age recall facing ridicule and even physical punishment for being caught speaking French at school. Thus, natural usage declined.

Louisiana natives like multi-instrumentalist brothers Sam and Jack Craft or singer-songwriter Alexis Marceaux, who recall older relatives speaking French at home might have grown up naturally bilingual but for that. In making music together, they reimagine – and then make real – a world in which those ways of speaking survived and naturally evolved. What if there had been no prohibition, and young musicians who listened to Radiohead, Talking Heads and Arcade Fire were also fluent in Louisiana French?

This opens up a world of possibilities. There’s room for Afrobeat-inflected drums, marching-band parade honk and rumble, a flirtation with Cajun tradition (via the Balfa Brothers’ classic drinking tune “Parlez-Nous à Boire,” recorded on their 2013 debut EP Super Vilaine and featured in FX’s American Horror Story) but funneled through New Orleans bounce. To the band, the sound of language itself is an instrument in its own right, one more tool in the creative arsenal. Hard consonants and smooth sibilances, as the band chooses which language best expresses a thought, work in a team alongside kick drums and violins.

Sweet Crude’s first LP, 2017’s Créatures, which Consequence of Sound called “glorious” and “stunning,” continued down that road of freewheeling experimentation – a buoyant, liberated sense of why not. Officiel//Artificiel is the work of a band that’s been at work together for seven years, with some shifting membership and a lot of evolving skill, feelings and ideas. Trust and comfort born of such a long, dynamic relationship emanates off the stage during Sweet Crude’s explosive live shows, and more subtly on wax: it’s an assurance that this team can captain you letting feelings take over bodily on the dance floor through an infectious beat, or down the subtler journey of losing yourself emotionally in a record. “It’s never one sound, and there’s always all of us in every song,” Jack Craft said. “And every song feels like it’s been some collaborative splatter painting.”

Officiel//Artificiel was produced in New Orleans by Sonny DiPerri, a veteran of projects by Animal Collective, Portugal. The Man, Trent Reznor, My Bloody Valentine and DIIV, among others. In the studio, he fueled Sweet Crude’s push to innovate, weaving rougher and rawer found sounds and quirky experiments into their signature sweeping synths and pop ecstasies.
These new frontiers are interior, as well, making for both lushly cinematic songs like “Skin,” a dreamy but intense self-investigation showcasing the emotional range of Marceaux’s vocals, or “The Purge,” a taut, snappy meditation on what gets let go – objects and ideas alike – as we grow. “Rougarou,” named for the mythical Louisiana werewolf-like cryptid, is a glossy, simmering slice of electro-pop that considers the monstrous nature of other people.

“The whole record is about trying to find your authentic self,” said Alexis Marceaux. “Stripping yourself down, and realizing what other people and society tell you to be, and what you actually are. And each song tells that story in its own little way.”

“I always come back to vulnerability being the key emotion in all of this,” said keyboardist Skyler Stroup. “Going through any kind of transformation, you have to be vulnerable. That’s the most powerful to me. Being that naked to the world is terrifying, and you either run away from it or you persist through it.”