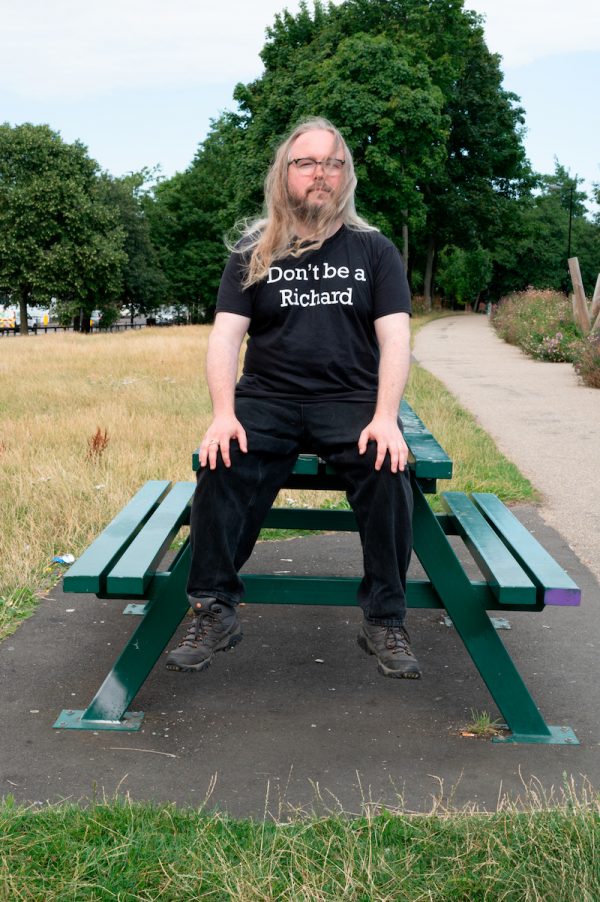 Pop in your earpiece, close your eyes and embrace the wonders (and horrors) of augmented reality and prepare to travel 500 years into the future as Richard Dawson returns with his new album The Ruby Cord.

Out on November 18th via Weird World, the new album is the final part of a trilogy that started with the pre-medieval world of Peasant, was brought back to the present day with 2020 and – possibly – concludes in the future with Dawson’s seventh studio album. After recent collaborations with Finnish metal innovators Circle and his work with Hen Ogledd, this is a return to Dawson’s own world with seven tracks that plunge us into an unreal, fantastical and at times sinister future where social mores have mutated, ethical and physical boundaries have evaporated… a place where you no longer need to engage with anyone but yourself and your own imagination.

While 2020 dealt in social realism with explorations of testy football matches, the fallacy of work-life balance and therapeutic forms of repetitive exercise, The Ruby Cord shakes off the limitations of so-called real life and delves headlong into a (sort of) sci-fi world where human society has collapsed and morphed into something distinctly less solid. “So many of us are moving into these fantasy worlds,” says Dawson. “Whether it’s actual constructed virtual realities, computer worlds, or retreating into even more fantastical realms…. conspiracy theories, nationalism, amateur football punditry. People construct their own world because this one is so flawed.”

Despite its futuristic setting, Dawson is still tackling contemporary issues – in this near-future, the fantasy world that some people live in looks incredibly like Old England or mythic Albion. But what happens if there’s a glitch in this virtual world that turns a pastoral scene into one of dread? Dawson explains further whilst indicating some of the inspirations behind the album: “Like when you play video games, sometimes something glitches and it makes something happen that’s really bizarre and disturbing.”

Opening track “The Hermit” is Dawson’s most ambitious work thus far, taking the epic storytelling of 2014’s “The Vile Stuff” and stretching the limits even further into a sprawling 40-minute mood piece that acts as the gateway to the rest of The Ruby Cord. An accompanying 40-minute pop video has been made for “The Hermit” by director James Hankins. Telling the story of a loner living in a bucolic dreamworld, the short film will be premiered at several cinemas and art spaces across the UK with Q&A sessions after each screening. These screening events offer the first opportunity to hear music from The Ruby Cord, with details of live dates in 2023 to follow soon.

Watch the trailer for The Hermit here.

As with Peasant and 2020, The Ruby Cord was recorded with Pigs x7’s Sam Grant at Blank Studios in Newcastle-upon-Tyne, and the mantra that emerged with The Hermit was “what happens if we push on a bit further?”. Joined by regular collaborators Rhodri Davies, Angharad Davies, and drummer Andrew Cheetham the answer to the question is: possibly Dawson’s best songwriting yet.