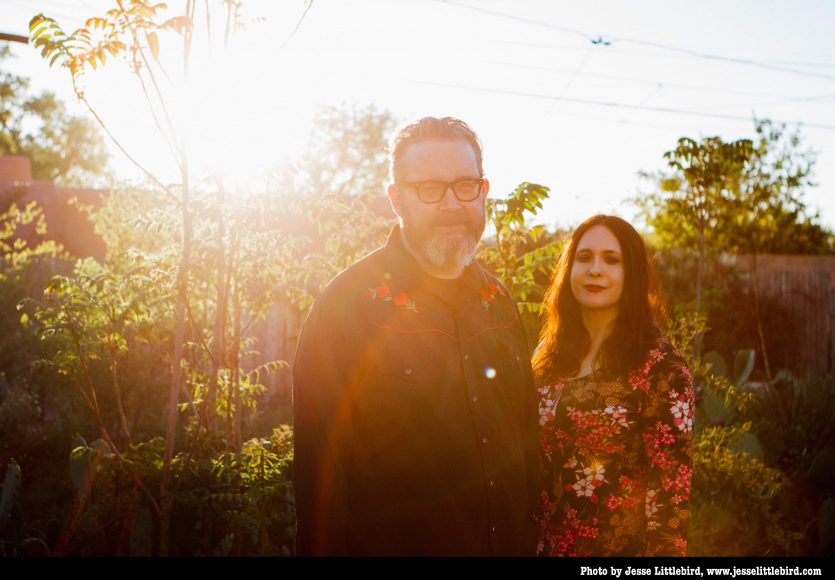 The Handsome Family’s greatest gift lies in its tremendous talent for painting vivid, sometimes terrifying pictures with every word— NPR

As songwriters it’s the eerie, ancestral voice of ‘Anonymous’ they ultimately resemble the most —CHICAGO READER

RENNIE SPARKS DISAPPEARED one afternoon while waiting for a flight at O’Hare. A middle-aged businessman, McDonald’s bag in one hand, rolling-bag dragged by the other— walked up to Rennie and, without pause, turned and sat down on her lap. A second later his french fries and rolling bag were on the floor and he was sputtering apologies, insisting he’d seen an empty chair.

Rennie often has trouble with automatic faucets ignoring her waving hands but this unexpected airport invisibility was in 2014, the year the TV show True Detective used her song, “Far From Any Road” as its opening theme. This was the year The Handsome Family (aka husband and wife Brett and Rennie Sparks) became visible to millions. Even as she was getting sat on by strangers, youtube counts for The Handsome Family’s ‘hit’ song climbed from two million to ten million, twenty million and more. The song was in the top 10 in US and UK Spotify charts and spent months in itunes top 100 in countries as far-flung as Vietnam, South Africa, and the Ukraine.

Millions of viewers ‘broke the internet’ watching the final episode of True Detective S1, but Rennie and Brett watched in their little house in Albuquerque, NM feeling oddly alone. The Handsome Family were now known around the globe for a song they’d written 12 years earlier about fire ants and desert plants, a song now linked forever to a show about cops in a psychic swamp. The Sparks were arguably famous now, but at the same time unknown. They were not their famous song nor was their famous song written for the show that made it famous. All these disconnections, though, are fine when you’re a writer of songs.

For almost as long as they’ve been married (26 years) Brett and Rennie have written songs together (Brett, music; Rennie, words). Their finished work is never fully one or the other’s, but lives in unseen space between them. William Burroughs claimed he walked busy streets without being seen simply by seeing everyone else first. This is similar to the Sparks’ approach to songwriting and why Rennie embraces her power to vanish. You have to willingly disappear in order to write lyrics for someone else’s voice or to write music for someone else’s words. Invisible songwriters are happiest when their songs outshine them, leaving their creators unseen in the dust.

The Sparks have released 10 albums since 1995’s Odessa. Their songs have been covered by countless youtubers and well-known artists like Jeff Tweedy, Amanda Palmer, Christy Moore, Cerys Matthews and Andrew Bird (who released an entire record of HF covers). Guns ’N Roses used, “Far From Any Road” as stage entrance music for a South American tour and both Bruce Springsteen and Ringo Starr are fans. Decades into their careers, after winning the TV theme-show jackpot— the Sparks still find their greatest reward in disappearing into new songs.

And so in the strange light of 2014 they began again to write. 2016 brings the release of Unseen— 10 songs by a couple both world-famous and happily invisible. Each song on the record has a guiding color—gold, silver, green, red, white. Rennie is also a painter known for her vivid and surprising use of color and she finds herself painting even when her brushes are made of words. The stories of Unseen are mostly inspired by real events— “Gold” began when a bunch of twenty-dollar bills blew in Brett’s face in a parking-lot dust storm. “Gentlemen,” is a tribute to William Crookes who built the first vacuum tube in 1875 hoping to detect spirits from unseen dimensions. And “Tiny Tina”— Rennie still hasn’t seen that little horse.

Unseen is about the light that emanates from things we can’t see— behind “The Red Door,” in the empty hands of blackjack losers (“The Silver Light”), and amidst desert bones bleaching in the sun (“King of Dust”).

Since 2001 Brett has made their albums in a converted garage at the back of their house. He recorded Unseen on a Mac and played most of the parts at night with only hawk moths listening. There were guest musicians— David Gutierrez: mandolin on “Tiny Tina” and dobro on “The Silver Light.” Alex MacMahon: guitar on “The Silver Light,” baritone guitar and pedal steel on “Gold.” Jason Toth: drums throughout (except “Green Willow Valley”). Rennie wrote all the lyrics. She sang and played banjo and autoharp, but didn’t bother to write down on which songs.

The Sparks’ music is steeped in the western gothic of New Mexico life. The unseen is powerful here. Nothing rusts, but entire oceans have disappeared. Ski masks mean robberies, but in the slow dive of the sun enormous bugs awaken in thorny yards and unseen sirens and coyotes cry out to the purple sky. Just about anywhere you stand there’s been some blood drawn.

In 2016 The Handsome Family continue to sell out venues worldwide that they couldn’t have filled before TV fame. Live, Brett (guitar/vocals) and Rennie (banjo/bass/ vocals) are joined by drummer Jason Toth (worldwide) and multi-instrumentalist Alex MacMahon (USA). Their shows are full of humor and chit-chat. The Sparks aren’t afraid to reveal their ordinary humanness. The invisible couple is also very happy to be seen.