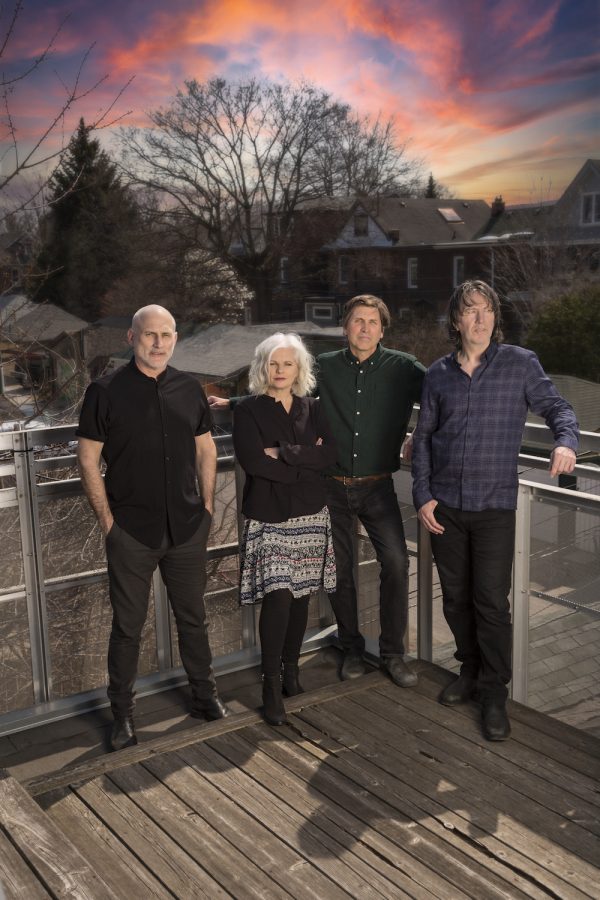 Saying the Junkies “cover” songs doesn’t quite do them justice. Like greats from the classic pop standards era, the Junkies interpret the music of others. They embrace the songs, adapting them in their own style.

The band’s latest release, Songs of the Recollection, finds the band as distinctive and individual as when they started. Long admired for their carefully chosen covers, the new album consists of nine songs by some of the band’s favorite artists. Some of the tracks are newly recorded, while some are collected from earlier projects.

Listen to Songs of the Recollection, and you’ll hear works originally written and recorded by Neil Young, Gordon Lightfoot, Bob Dylan, The Cure, Gram Parsons, Vic Chesnutt, The Rolling Stones and David Bowie that the Junkies make their own – and make them sound perfectly natural beside each one another.

Formed in Toronto in 1985, with siblings Michael Timmins on guitar, Margo Timmins on vocals, Peter Timmins on drums, and Michael’s lifelong friend Alan Anton on bass, the band was an odd fit for the era. In the days of hair metal and rock bombast, the Junkies’ music seemed to spread like a whispered secret. Those who heard it, never forgot it.

In a way, Songs of Recollection takes the quartet back to its roots. While the group is known primarily for its original songs, since the band’s beginnings Cowboy Junkies have always offered up favorites by other artists.

Except for one original, and a cover of Bruce Springsteen’s “State Trooper,” the band’s 1986 debut album, White Off Earth Now, was made up entirely of songs by great blues artists. When the Junkies broke through to the mainstream with the follow-up album, The Trinity Session, it was the group’s moody rendition of Lou Reed’s “Sweet Jane” that immediately caught the ears of college radio.

In the following years, the group included cover songs on nearly all of their releases, recorded an entire album of songs by the darkly evocative songwriting great Vic Chesnutt, and released two volumes of ’Neath Your Covers series, comprised of songs by other artists.

Cowboy Junkies have never had a break-up or had to take a hiatus because they couldn’t get along or got tired of each other. Instead of battling egos, the band appreciates what the other brings to the table. It’s not surprising that the band still appreciates what their favorite songwriters have to offer as well.

“Our goal has always been to create music that took hold of the listener the way that this music took hold of us. These are some of the songs and some of the artists that found their way into our lives and eventually into our repertoire over the past fifty years,” Michael Timmins.

Cowboy Junkies’ deliver a surprisingly faithful rendition David Bowie’s opening track from Ziggy Stardust and the Spiders From Mars. Retaining the undercurrent that manages to be both pessimistic and whimsical, the Junkies make it sound like natural for the group.

In contrast to Gram Parsons’ own breezy rendition on the album Grievous Angel, the Junkies bring out the darkness imbedded in the song. It’s dreamy and maybe a little more in line with Parsons’ lyrics where the city “… ain’t no place for a poor girl like me.”

The Rolling Stones’ “No Expectations” has been covered by everyone from country stars Johnny Cash and Waylon Jennings to garage rock greats The Dirtbombs, but with a reverently sleepy slide guitar and Margo Timmins’ understated vocals, the Junkies capture the road-weary spirit that is the crux of the song.

Here Cowboy Junkies cover both sides of Neil Young. “Don’t Let It Bring You Down,” one of the most legendarily dark creations in Young’s catalog, is in stark contrast to “Love In Mind,” one of his sweetest. The Junkies put their versions side by side making the songs’ differences all that more striking.

“The Way I Feel,” Gordon Lightfoot

The title track from Gordon Lightfoot’s second album from 1967, the Junkies expand the song from a simple folk ballad to a rock number with soulful electric guitars and a solid beat.

While Bob Dylan’s most celebrated work comes from the 1960s and ‘70s, the Junkies decided take on one of Dylan’s most recent songs. Originally appearing on his 2020 album, Rough and Rowdy Ways, it’s one of Dylan’s prettiest and most straightforward love songs. The Junkies deliver it with delicate instrumentation giving the listener plenty of space to appreciate that Dylan remains a master poet.

The Junkies developed a friendship with singer-songwriter Vic Chesnutt and were such fans that they recorded Demons, an entire album of his songs as a tribute after his death in 2009. “Marathon,” a number not included on that release, is one of Chesnutt’s most ominous and telling.

Initially appearing on Cowboy Junkies’ 2004 ‘Neath Your Covers EP, “Seventeen Seconds” is the title track and closing song of The Cure’s second album. The expressive guitar and drum work by the Timmins brothers punctuate the song’s sparse and cryptic lyrics making it feel maybe even more mysterious than The Cure’s original version.