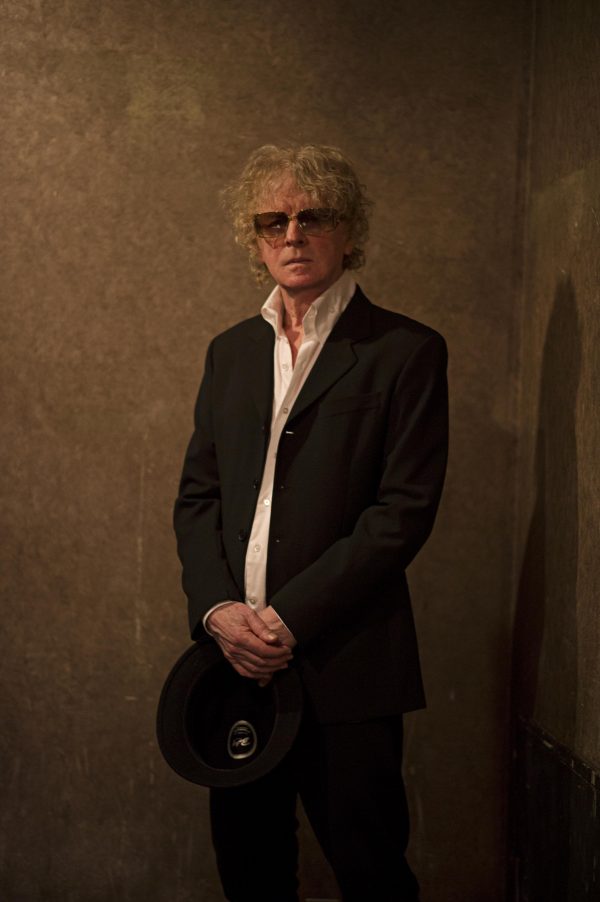 Whilst his achievements during his first decade as a recording artist would have been more than enough to ensure his iconic status, Hunter has never been one to coast on past glories. Indeed, in the past dozen years, he’s made a series of riveting albums that stand with his best and most resonant work, while making a decisive return to touring, delivering incendiary live performances that show his fire to be burning as brightly as ever.

He was already a veteran of the London music scene by the time he joined Mott The Hoople in 1969. With Mott, he recorded four iconoclastic albums – “Mott The Hoople”, “Mad Shadows”, “Wildlife” and “Brain Capers” by the time they hit international stardom with the glam-rock anthem for a generation, the David Bowie penned, “All The Young Dudes”. The band’s artistic and commercial success continued with “Mott” and “The Hoople”, between them, containing the hits, “All The Way From Memphis”, “Honaloochie Boogie”, “Roll Away The Stone” and “The Golden Age Of Rock ‘n’ Roll”. On their final tour, they took out a then little known band, Queen, who would have a hit single with a song about their experiences, “Now I’m Here”. It would be the only time Queen would open for anyone and the band members would stay long term friends with Ian, contributing backing vocals to his “All American Alien Boy” album. Mott have also been credited by John Lydon (Sex Pistols) and Mick Jones (The Clash) as being one of the pioneers and inspirations behind the burgeoning punk / new wave movement. Later on, Ian would go on to produce Generation X’s “Valley Of The Dolls” album and The Clash would play on Ian’s “Short Back ‘n’ Sides” release. Not many, if any, other artists could claim to have influenced bands as diverse as Queen and the Sex Pistols.

Mott disbanded in 1974 and Ian moved to New York, segueing into a celebrated solo career and quickly building a formidable body of solo work. The albums, “Ian Hunter”, “All American Alien Boy”, Overnight Angels”, “You’re Never Alone With A Schizophrenic”, “Short Back ‘n’ Sides” and “All Of The Good Ones Are Taken” between them featuring such diverse talents as the aforementioned Queen and The Clash, Mick Ronson, the then unknown jazz sensation, Jaco Pastorious and The E Street Band, of Bruce Springsteen fame.

Barry Manilow took one of Ian’s most personal songs, “Ships” into the charts and Great White had a international hit with their cover of “Once Bitten, Twice Shy”. Ian took time out to produce in the ‘80’s, returning in 1993, prompted by the death of his long time collaborator, Mick Ronson.

Since then, Ian has produced what many critics feel to be his best work to date, “The Artful Dodger”, “Rant”, “Shrunken Heads”, Man Overboard” and “When I’m President”. There are now a new generation of artists name-checking Ian as an influence; Jeff Tweedy (Wilco), Bobby Gillespie (Primal Scream), Taylor Hawkins (Foo Fighters) to name but three.

Mott The Hoople have reformed twice and played two hugely successful tours. If anyone had any doubts as to the long lasting appeal and influence of Ian’s music, you would only have needed to peek at the scene’s in Mott The Hoople’s dressing room after their London show where they were joined by; Jimmy Page (Led Zeppelin), Mick Jones (The Clash), Chrissie Hynde (The Pretenders) and John Squire (The Stone Roses).

But, as always, whilst proud of his past achievements, Ian would prefer to focus on the future. “To me, music is holy” Hunter asserts, adding “For the first fifteen years of my life, I had no idea what I was here for. But then Elvis came out and it was, “Oh, that’s what I am here for”. Rock ‘n’ roll got me out and gave me a great life and I don’t know what I would have done without it. It’s all I know and my identity is all tied up with it”.

Proper Records 30-Disc anthology box set, Stranded in Reality due on 2 September, 2016 is a strictly limited edition of 2,500 units for sale to worldwide customers from Proper Records.

This will be quite a year for Mr. Hunter.