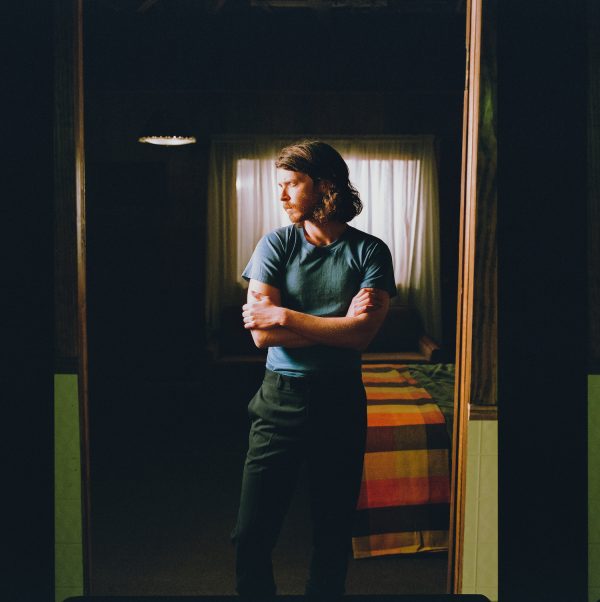 The album’s title track isn’t about staying out all night, hitting the bars, carousing with friends—all things the Nashville-based singer, songwriter, producer, and multi-instrumentalist did when he was younger. Rather, the song is about waking up before the sun to embrace the possibilities of a day. With its rush of guitars and synths building into a fanfare that lends majesty to the morning, it romanticizes the responsibilities of adulthood while also delivering an irresistible sing-along hook. “That song covers what this record is all about. It’s about having your first cup of coffee and enjoying the fact that you’re not sleeping in or waking up with a hangover. Maybe you wish you could go back to your twenties, when you could stay out all night and sleep all day, but you’re so much clearer in your thirties and hopefully much wiser.”

Cramer spent his twenties steering Old Sea Brigade through rocky straits, starting with his self-released debut EP Love Brought Weight, and later his 2019 debut full-length, Ode To A Friend, garnering critical praise and sending him on the road with Tall Heights, Joseph, Lewis Watson, Wild Rivers, Passenger and Luke Sital-Singh. He developed an undeniable chemistry with Luke that carried over to the studio as they teamed up on the collaborative All the Ways You Sing in the Dark EP. When he wasn’t on the road or working on his own music, Cramer was establishing himself as a sought-after producer to artists from around the world who stopped by his Nashville home studio to collaborate – including Australians Angie McMahon and Lawson Hull, London’s John Joseph Brill, Montreal’s The Franklin Electric and rising talent from his local community like Braison Cyrus and Paul McDonald. In 2021, he released his sophomore album, Motivational Speaking, which Consequence called “some of the best quarantine art” and Uncut called “sharply written and infectiously propulsive.”

5 AM Paradise builds on those successes, as he revels in new sounds and ideas and explores the textures of everyday life in songs that make space for doubt and worry alongside joy and pleasure. He leaves his songs unresolved—posing more questions than he answers—so that they reveal more and more of themselves each time you hear them. He did not, however, intend to make a coming-of-age album; that subject matter presented itself gradually through every stage of the creative process. “I’m one of those songwriters where sometimes I’ll write a song and I’ll have no idea what it means. But I love the mystery behind that, so I try not to nitpick every line. It’s more about letting your subconscious speak.”

That’s where “Monochrome” originated. “I don’t even know where that word came from. It just appeared out of nowhere.” With its headlong rush of melody and glimmery hook, the song is a co-write with Trent Dabbs (Kacey Musgraves, Ashley Monroe), and it took Cramer to places he didn’t expect to go. “I can definitely say that I would not have written the same song without Trent. I would have needed to put more chords in there, but it’s nice to have another voice to tell you, No, it’s fine. It’s cool just like it is.”

To continue that process of collaboration and tease out the meanings of these songs, Cramer recruited two producers who figure prominently in Old Sea Brigade’s history: Jeremy Griffith produced his debut, 2019’s Ode to a Friend, and Owen Lewis worked on the follow-up, 2021’s Motivational Speaking. “Jeremy always blows my mind coming up with different parts, and Owen comes from an incredible engineering background. They both have a really special way of seeing things, and they both represent different eras of this project, so let’s see what happens if we put them together.”

Needing to get away from the familiar studios in Nashville and find a new perspective on the life he has built in that industry city, Cramer and his pair of producers decamped to a mountain cabin outside Asheville, North Carolina. There, they set up a makeshift studio on the top floor, which afforded them an inspiring view of the Blue Ridge Mountains. On the other hand, being in the middle of nowhere—on top of a mountain so steep that Jeremy’s truck couldn’t make the climb—was “a little creepy. I was sleeping on the ground floor next to this giant window, and outside there was a path leading into the dark woods. I just knew I was going to wake up one morning and there’d be someone staring at me through the window.”

As the small crew bounced ideas off each other, Cramer tried to shed his self-consciousness and settle into the role of the artist. “When I’m producing someone, the main thing I always tell them is, Don’t overthink it. But as soon as I’m the artist, I’m overthinking everything. One of the things that I struggle with is just getting the best vocal take and being vulnerable in my performance.” For that reason they kept first takes and even in some cases used the demos, where he’s not self-conscious. It lends the album an emotional rawness, as though he’s processing these thoughts and even writing these songs in real time.

The trio let these songs take the forms they needed. They added a fluttery guitar loop and a strutting rhythm section to “Man Made By Delusion,” and Cramer sings the lyrics like he’s in the middle of a profound epiphany: “I’m a man made by delusion, I wake with dream in hands.” That might be the perfection summation of his approach to making art. “Hands in the Dirt” had the most radical transformation, as it started out as two very different songs (one of which is a co-write with friend and frequent collaborator Luke Sital-Singh). “We had a verse from one song and a chorus from another, but it wasn’t until we were up in the cabin that Owen suggested we combine them. It was an amazing moment—a real epiphany! We tracked it immediately so we didn’t overthink everything.”

As the album came into focus and its themes emerged, “Hands in the Dirt” took on new gravity and importance, especially its gracefully rising melody and emphatic, empathetic chorus. “Remember falling asleep, your hair in the wind,” Cramer sings, his voice wistful, as though holding back a cresting wave of emotion. “Back of your grandmother’s car, your life in her hands.” It’s a vivid image, one drawn from his own experiences, balancing the warmth and security of childhood with the inevitable heartbreak that colors every life. “When you’re writing a song, you’re putting it out there in the world. You can’t take it back. You can’t undo it. That can be a little scary. But as I’ve gotten older, I’ve grown more comfortable with that idea, and I’ve tried to open myself up. No matter how depressing things might get at times, I saw that there was a light at the end of the tunnel.”