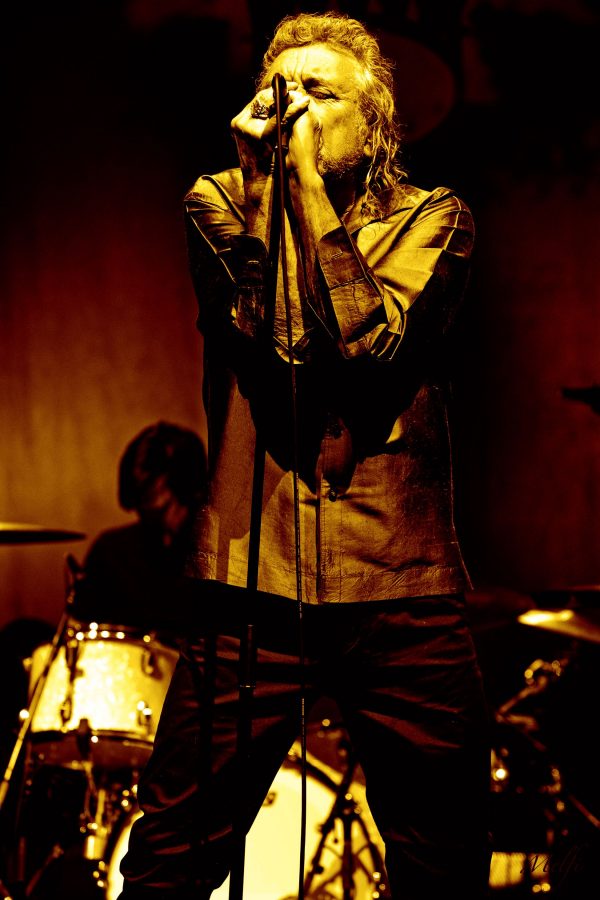 Though Robert Plant has returned to the Welsh borders, he retains the sensibility—and the soul—of an itinerant troubadour. His diverse musical points of reference stand out like pins on a map, from Austin, Texas to Timbuktu, Mali. Plant treasures transience.

On his second Nonesuch album, Carry Fire, Plant reflects on the experiences, the emotions and the sounds of where he’s been, and he ruminates on where he—and our world—might be headed. Bittersweet songs of love remembered and of time passing, are juxtaposed against cautionary tales, of people and nations that have failed to learn the familiar lessons of history.

“I’ve filled many British passports,” says Plant. “It’s like I’m just moving through the spheres. I feel like a mariner who has spent so much time in so many different ports of call, experiencing so many different adventures and scenarios. So perhaps this collection is more ‘pictures at twelve’ rather than ‘pictures at eleven’.”

“May Queen” starts the album on an upbeat note, percussive psychedelic folk, with Plant’s vocal alternating between seductive and yearning. “Carry Fire,” on the other hand, is a kind of haunted desert blues, bolstered by a pulsing rhythm, ghostly backing voices, and a viola chasing the melody of an electric oud. The anthemic rock beat of “New World” visits the everlasting story of immigration, expansion and the disastrous effects on existing cultures. “Carving Up The World Again” is a more contemporary glimpse of “trouble at the border” and the futile palisades and walls. The sole cover is a pounding, trip hop-style take on Ersel Hickey’s 1957 sweet and simple rockabilly hit, “Bluebirds Over The Mountain,” reconceived as an otherworldly duet for Plant and the Pretenders’ Chrissie Hynde, two iconic voices that intertwine beautifully.

Once again Plant collaborates with the Sensational Space Shifters, his well-matched band of brilliant, eclectic players with whom he’s been touring, on and off, since 2002: longtime guitarist Justin Adams, keyboardist-programmer John Baggott, bassist Billy Fuller, drummer Dave Smith, and guitarist Liam “Skin” Tyson. Collectively, the group—which evolved out of an earlier Plant backing combo, Strange Sensation—has its roots in folk and world music, and the still-influential Bristol Sound of Massive Attack and Portishead, propelled by the juggernaut Howling Wolf/Led Zep legacy.

Even before they’d developed a repertoire of their own, Plant and the Space Shifters had a unique live sound, a heady mix of American roots music, Celtic folk, reverberating trip hop, and hypnotic Middle Eastern and African grooves. They employed this sonic arsenal to reinterpret old blues standards, Led Zeppelin classics, and Plant’s earlier solo work at festivals and on concert tours. That exploratory approach became the foundation for Plant’s acclaimed 2014 Nonesuch debut, lullaby….and the Ceaseless Roar, his first album of original compositions since 2005.

On Carry Fire, Plant and the Space Shifters make what Plant calls “a mélange a trois”: “It’s a very British thing, the Bristol thing and then the element of North African and West African drum rhythms brought together with plaintive melodies.” Plant added a new voice to this polyglot sound by inviting fiddle and viola player Seth Lakeman, a luminary of the British folk scene, as a guest star on these sessions, much as he did with Gambian musician Juldeh Camara, on lullaby.

While Plant wrote the words, the group collectively brainstormed the basic tracks, encouraged by Plant to bring the same sense of fearlessness and spontaneity they display on stage. As guitarist Justin Adams told the New York Times, Plant “can create an atmosphere where suddenly lightning is more likely to strike. In collaborative music, it’s often not a question of careful writing and composition and all these sorts of things. It’s more the spirit of the moment when things come together in a flash. And he’s an expert on that.”

“Some things were really spontaneous.” Plant corroborates. “I’d been singing ‘Bluebirds’ live with the band for a while. I approached Chrissie because I wanted a female voice. It’s such a retro-esque part for her, a 1957 rockabilly song…and now we’ve screwed it to the ground and put it through the Bristol sonic mill. That one came straight away. And ‘Carry Fire’ was very immediate. Justin has a beautiful electric oud line from which it developed. I’m inspired by the rhythmic grooves we create. We specialize in hypnotic moments of atmosphere and sounds. And of course there’s the bendir”—a North African hand drum—“underneath many of these rhythms”.

Plant produced the album himself with contributions from all the musicians, with the help of engineer Tim Oliver, who was also on board for lullaby. With Oliver, Plant assembled layers of backing vocal tracks. They provide a lushness to the otherwise brooding “A Way With Words,” enhance the dreamy sensuality of “Season’s Song,” and help to dial up the romantic drama of “Dance With You Tonight.” Plant even uses some unlikely pop harmonies to serve as counterpoint to the main voice on “New World.”

“We recorded it in a studio next to Peter Gabriel’s ‘Real World,’ not far from Bristol and Bath in the West Country. It’s a real hive of industry there. Working alongside the main studios, we’d encounter many artists from around the world. It’s an inspiring atmosphere. You meet Welsh singers, African players from Niger, and American Bluegrass goddesses passing through. It’s a creative place”.

Plant has never been an artist to rest on his laurels. He’s a multiple Grammy Award winner, most recently for Raising Sand, his collaboration with Alison Krauss; as a member of Led Zeppelin, he’s a Rock and Roll Hall of Fame inductee; and, in a 2011 Rolling Stone poll, readers named him the top rock vocalist of all time. On the closing track, “Heaven Sent”—a song he calls “the anthem of my being”—he describes a restless, journeying spirit: “All that’s worth the doing is seldom easy done/All that’s worth the winning is seldom easy won…”

“It’s about intention,” said Plant of his latter-day career and his current work. “I rejoice in my previous work but must continue the journey to new worlds, after all there are so many songs that are yet to be written. The whole impetus of the band has shifted, moved on its axis somewhat to allow more air and light to come in. Ultimately that makes for more exciting, and interesting landscapes of mood, melody and instrumentation.