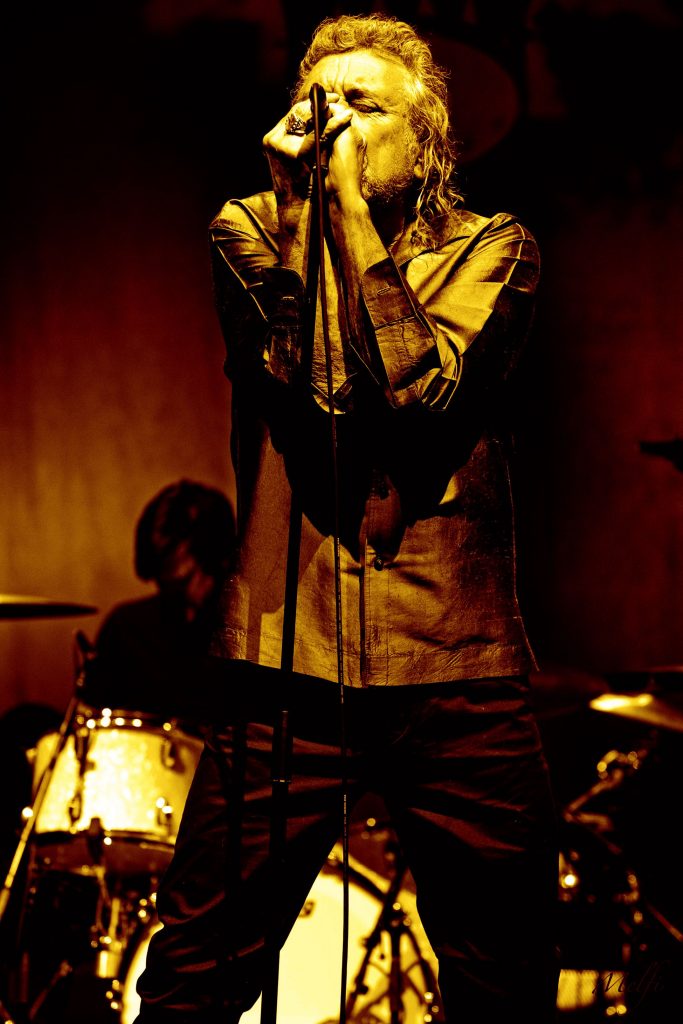 It was the little looks that Robert Plant and Alison Krauss exchanged as they sang that gave away how much they enjoyed being on stage together at the Greek Theatre in Los Angeles on Thursday.

Midway through “Fortune Teller,” an Allen Toussaint number, Plant and Krauss finished another gorgeous bit of harmonizing, delivering the rest of the song for guitarist J.D. McPherson to wrap up with a reverb-drenched solo.

He grinned at her. She beamed at him. It was so good and they knew it, and everyone in the Greek felt it too.

This partnership might not have made sense to their individual fan bases when Plant and Krauss teamed up in 2007 for “Raising Sand.” But Plant, even in his Led Zeppelin days, had a deep love for roots music from American blues to English folk, and Krauss, though she got her start as a country-bluegrass singer and fiddler, had grown up listening to everyone from Dolly Parton to the Rolling Stones.

That album went onto win five Grammys, but the duo didn’t get together for a second album until last year when “Raise The Roof” delivered a follow-up collection of duets and harmony vocals.

“We’ve been apart a long time, me and Alison,” Plant said, addressing not only the gap between the albums but the 14 years since their last Los Angeles shows, a pair of 2008 concerts also at the Greek.

“We came here, and went away for 10 years,” he said. “And it’s so good to be singing alongside this woman.”

The show opened with Krauss and Plant walking out from opposite wings of the stage to join their band to sing “Rich Woman” over its swampy New Orleans groove. Their version, which won a Grammy for best pop collaboration with vocals, is a cover of a song originally done in the mid-50s.

But age alone doesn’t equal roots. The next number, “Quattro (World Drifts In),” is a much newer song, a tune recorded by Calexico, the indie rock band from Tucson, which at the Greek arrived with achingly beautiful harmonies over a musical backdrop as vast as the desert.https://cfd05849ecbdc4e1d38439449250e738.safeframe.googlesyndication.com/safeframe/1-0-38/html/container.html

“Sometimes there’s drama, melodrama,” Plant noted at the finish at “The Price Of Love,” one of two songs by the close-harmony masters the Everly Brothers. “And sometimes it just kicks ass.”

That served as introduction to “Rock and Roll,” the first of three Led Zeppelin recordings covered on Thursday, all of them drawn from the band’s untitled fourth album, commonly known as “Led Zeppelin IV,” which was released in November 1971 a few months after Krauss was born.

This, though, was “Rock and Roll” at the barn dance, a country shuffle arrangement that featured dueling solos between guitarist McPherson, who opened the night with a half hour of his own music, and fiddler Stuart Duncan.

Perhaps the loveliest song of the night arrived when the pair performed “Please Read The Letter,” a song originally done by Plant and his Led Zeppelin partner Jimmy Page on a post-Zeppelin duo record.

It’s a number that captures the loneliness of a last-chance love, and between Plant’s lead vocals, still powerful and clear two days before his 74th birthday, and Krauss’s harmonies and fiddle solo, the Grammy record of the year winner might have broken your heart.

In addition to pure duets, Krauss and Plant often swapped lead vocals, the other joining on harmonies or a bit of instrumentation, a fiddle for Krauss, fists full of maracas for Plant.

Her lead on “Last Kind Words Blues,” a slow acoustic blues midway through the show ended with a gorgeous almost unaccompanied bit of harmonies at the finish. His lead on the condemned man’s murder ballad “You Led Me to the Wrong” had a similarly moving close.

Highlights towards the end of the show included a back-to-back pair of Led Zeppelin songs. Fans cheered loudly at the opening mandolin melody of “The Battle of Evermore,” a Tolkien-influenced folk rock fantasy, and the rare song for which Zeppelin had an outside singer, Sandy Denny of Fairport Convention, join them.

It was followed by “When The Levee Breaks,” the Led Zeppelin adaptation of Memphis Minnie’s original, which opened with Krauss and Duncan both on fiddles as the band built a kind of ominous droning roar before Plant began to sing the bluesy vocal.

“Gone Gone Gone,” a jaunty Everly Brothers number, lightened things up to close the main set, Plant dancing around the stage in delight, Krauss silently smiling as she had all night.

A brief break led to the encore performance of “Can’t Let Go,” a song originally by Lucinda Williams, a bouncy blues shuffle that led to still more happy looks shared between Plant and Krauss as they sang the finale’s chorus, “Well it’s over, I know it but I can’t let go.”