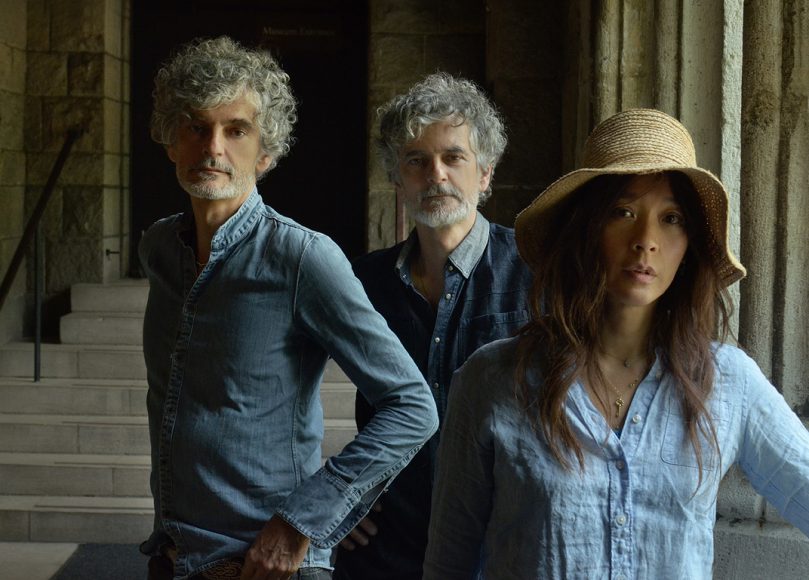 Not many bands can handle very long careers and never stop evolving and actually, keep on exploring, from record to record. Blonde Redhead deserves a place in this category. In 25 years, the acclaimed New York based trio went from the noise rock of the early years to the refined dream pop of “Misery Is A Butterfly”, passing through the sensual electronic textures of “Barragán” in 2014, before reaching the melancholic romantic sound of “3 o’clock” EP..

Formed in 1993 by Kazu Makino and twin brothers Simone and Amedeo Pace, the band challenges itself with each recording situation and the results have been stunning every time. Their music is always inspired by the same emotions, but their tastes and the ways they choose to execute those emotions are constantly evolving.

With Kazu and Amedeo on guitars and vocals, Simone on drums, and Takahashi on bass, the band’s chaotic, artistic rock caught the attention of Sonic Youth drummer Steve Shelley, who produced and released the band’s debut album, Blonde Redhead, on his Smells Like Records label in 1995. Shortly after the album’s release, Takahashi left the band. The remaining members continued as a trio, releasing a second album, La Mia Vita Violenta, on Shelley’s label in 1995.

For their 1997 release, Fake Can Be Just as Good, recorded for Touch & Go, the trio was joined by guest bass player Vern Rumsey from Unwound. By 1998, the band eliminated bass and scaled back to guitars, drums, and vocals for In an Expression of the Inexpressible. Melody of Certain Damaged Lemons and the Mélodie Citronique EP followed two years later.

The song “For the Damaged Coda” released on the album Melody of Certain Damaged Lemons, was used in an episode of Rick and Morty series and gained over 33 million views on YouTube.

The band’s first album for 4AD, Misery Is a Butterfly, was released in spring 2004. For 2007’s 23, the group opted for a mix of dream pop and delicate electronic textures. Three years later, Blonde Readhead delivered Penny Sparkle, a more stripped-down, even more electronic-leaning set of songs the band recorded in New York and Stockholm with Alan Moulder, Van Rivers and the Subliminal Kid. In 2014, the band returned with Barragán, featuring production from Drew Brown (Beck, Stephen Malkamus, Radiohead).

The band revisited its early days in 2016 with the Numero Group box set Masculin Feminin, which collected Blonde Redhead and La Mia Vita Violenta along with demos, singles, and radio performances from that era. That year also saw the release of Freedom of Expression on Barragán, a collection of Barragán remixes including contributions by Deerhoof, Van Rivers, Nosaj Thing, and Connan Mockasin.

Blonde Redhead returned with new music in 2017 in the shape of the EP 3 O’Clock, which they released on their own Asa Wa Kuru Records.

The band is now working on a new album, while Kazu Makino is going to launch her first solo project.