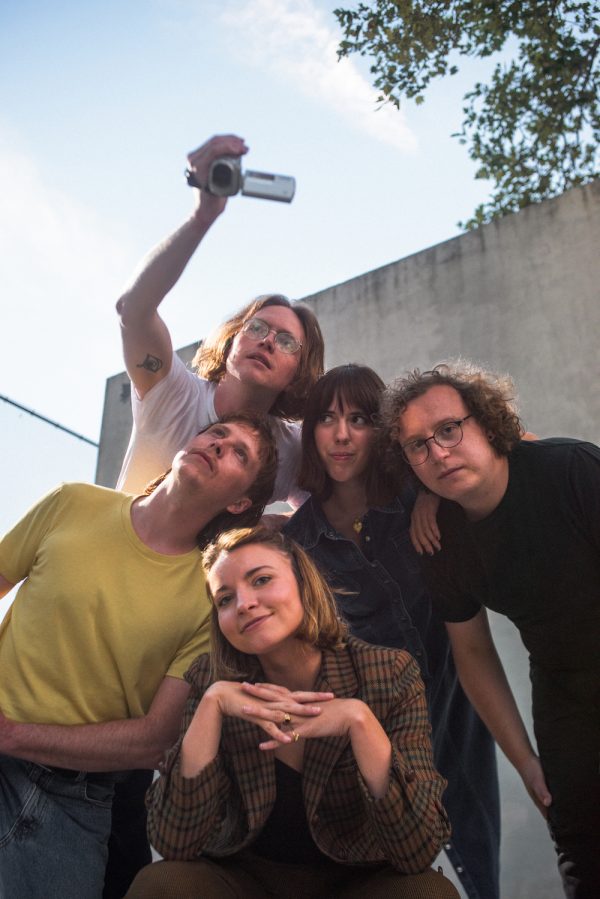 90 in November, the first full-length LP from Texas quintet Why Bonnie, crashes into existence with a squeal of feedback and a burst of distorted guitar. It’s a dynamic introduction to a more raw-edged indie sound from a band who have matured from bedroom dream pop into a sophisticated rock act, their evolving sound a reflection of the journey undertaken by songwriter Blair Howerton on this vividly rendered collection of songs.

As much a product of songwriter Howerton’s love for the intimate songwriting of fellow Texans Townes Van Zandt and Blaze Foley as it is her affection for the alt-rock of the Lemonheads and the Replacements, the eccentric pop of Sparklehorse, and “definitely Sheryl Crow,” 90 in November is a meditation on the pains and pleasures of nostalgia and a lesson in learning how to look back at the people, places, and experiences that have shaped us, with room for both unvarnished honesty and rose-tinted melancholy. 90 in November is about “coming to terms with your past to accept all of the sweet and all of the bitter,” says Howerton.

The songs for 90 in November were mostly written in Brooklyn, New York, where Howerton moved from Austin in 2019. Already in the midst of a major life change, Howerton’s feeling of being between worlds was compounded when quarantine hit and she found herself, like so many others, stuck in her apartment—about as far away from the wide-open spaces of Texas as one can possibly get. It was in this environment that she began to write songs parsing out the complicated, mixed emotions associated with building a new home while attempting to make sense of the one she had left behind.

As a result, 90 in November is a trip through Howerton’s inner world, but it’s also a road trip through Texas. Often it is both at once. The songs are full of poetic, cinematic lyrics that flash like colorful scenes glimpsed from the window of a car as it barrels along an interstate highway cutting through the Lone Star State, each one a road stop revealing a different facet of Howerton’s experience.

The title track is a sunny guitar pop song about her hometown of Houston, packed full of sparkling snapshots—”a technicolor sun” and “a cardboard cutout cowboy waving me goodbye”—that matches the music’s shimmering optimism. The hazy “Hot Car” is the flipside, with a hypnotic synth line mimicking the way a mental loop of dormant thoughts that surface in the warm cocoon of a car speeding towards its destination in the dead of night. On “Nowhere LA”—that’s LA as in Louisiana, by the way—Howerton uses a broken down car on an isolated road as a metaphor for a stalled relationship: ”I know I walk fast, but my heart moves so slow,” she sings. Elsewhere, Howerton is more literal in her recountings. On the wistful and Sheryl Crow-like “Galveston,” built around a chiming guitar line, Howerton recalls childhood trips to the island city of Galveston, singing evocatively of “candyland beaches” and “the East Texas sunrise making a face.”

90 in November’s deep sense of place isn’t accidental. The band—Howerton, keyboardist Kendall Powell, guitarist Sam Houdek, bassist Chance Williams, and drummer Josh Malett—considered making the record in New York or California, but ultimately decided that it had to be done in Texas. In early 2020, Why Bonnie headed down to the town of Silsbee (population: 6,634) to spend two weeks recording with Tommy Read (Lomelda, alexalone) at Lazybones Audio. Howerton describes it as an idyllic period of time where days were spent walking around with cows and evenings drinking Lone Star beer and looking at the stars. The stillness begat an emotional catharsis that is symbolized mid-record with “Silsbee”, a song where Howerton finally allows herself to fully inhabit the present moment while acknowledging her past. She describes it as an ode to her brother, who passed away in 2016. “I wrote those lyrics while we were recording,” remembers Howerton. “I had a quiet moment out in this beautiful pasture where I was able to think about him and how our connection is still very present even though he’s not physically here.”

Even when handled with as much grace as it is on 90 in November, nostalgia remains tricky to navigate, something Howerton addresses on the exuberant “Lot’s Wife.” The song is inspired by a story from the Old Testament of a woman who looked back at her city while fleeing and was turned to a pillar of salt. “I really liked that story and how it relates to the experience of nostalgia, how if you stare for too long, you’re gonna turn into something else and crumble,” says Howerton. With 90 in November, Howerton has achieved the opposite. By looking back on her past with fearlessness and compassion, she propels her songwriting forward into new realms of emotional sincerity and her band to new heights of sonic adventurousness. Yet no matter where the group goes from here, one thing will remain the same. “We’re a Texas band,” says Howerton. “We always will be.”