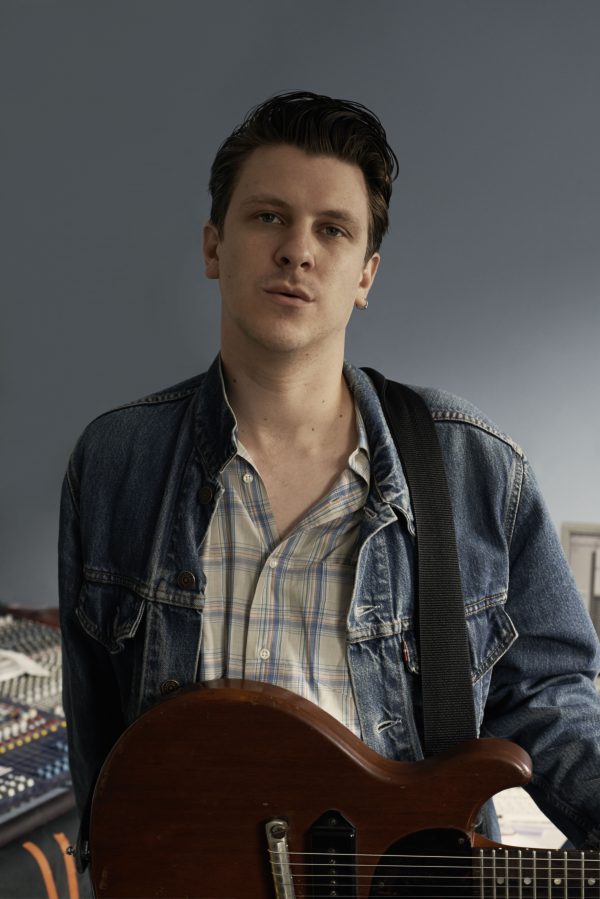 ‘From a young age I was hugely protective of my art. Perhaps to an extent which was somewhat juvenile. But I am, and at moments after the last album I felt like my back was against the wall. So my response to that was… shut up shop.’

Jamie Alexander Treays reclines in his scruffy East London studio, and grins. What hasn’t changed about the artist we’ve come to know as Jamie T are the disarming bounces between self-disclosure and irreverent humour, confidence and vulnerability, bantering cockney charm and the erudite introspection that comes with living for your art. What has changed is… everything else. Gone is the skinny ‘hoodie laureate’ who seemed like he’d be just as at home hanging around a kebab shop in his Wimbledon manor as he would in a recording studio or onstage at Glasto. In his place is a mature man in dapper mod classics, a little fuller of face and a lot less boyish and hyper.

And then he plays you his first album in five long years. And you recall that old chestnut about how the more things change, the more they stay the same.

But before we talk more about the surprising, triumphant “Carry On The Grudge”, let’s slay the elephant in the room. Its been almost five years since the spiky, globally-informed, occasionally grisly and proudly Clash-influenced “Kings And Queens” album reached No.2 in the UK charts, inspiring the critics to anoint the then-24-year-old Jamie ‘a rare, cocksure talent’ (BBC) and ‘a national institution’ (NME), and almost four since he last graced a concert stage. Where the Hell has he been?

‘I went back to school, learning how to write songs again’, explains Jamie, not actually meaning a large building with teachers in it. ‘I spent a good few years training myself up to make a record. I’ve never stopped writing the whole time… I’ve got hundreds of songs. But I spent a lot of that time copying other people’s songs, quite blatantly. It was a means to an end. I was trying to find a new way of writing.’

At the same time, Jamie moved from the south-west London suburb he’d become so associated with to Hackney, east London, went travelling on his own in America (‘I found out that you can’t buy an auto-harp in Nashville. And that when an American says “down the road”, they don’t mean down the road’.), and went on a somewhat isolated but essential voyage of self-discovery. This perhaps explains why much of Jamie’s past penchant for lairy street scenes and black comedy narratives have been replaced, on the new songs, by a more pensive air of personal sadness and longing.

‘Sadness and longing? Well, there’s been some rough times, in the last few years. It’s called “Carry On The Grudge” because it’s vaguely about growing into your own person. You’re brought up with all these things people give you, whether it be an angry streak or casual racism or whatever… all these things that aren’t really yours. Having toured from the age of 18 until 24, I didn’t go through a lot of the normal things young people go through. I grew up quickly. I had to. So when I had time to take stock… it scared the shit out of me, really.’

And have you come to any firm conclusions about who Jamie Treays really is?

‘No. But asking the question is more important than getting the answer.’

The most immediate, almost shocking thing about songs like “Limits Lie”, “Don’t You Find” and “Turn On The Light” is how big and bold they are. But the most radical change is in the honing. The Jamie T trademark – a torrent of rhymes, both sung and rapped, often dispatched with a novelist’s eye for visual detail and character quirk – is all but absent. Replaced by words that fit snugly into melody, concentrated language, a feeling of what one can only describe as… controlled unease. Melancholy supplants anger. An embrace of the power-ballad dominates the jittery rap excursions and punk-folk digressions of his first two albums. But mostly… there is a drastic reduction in the number of words.
‘I’m just trying to be concise. I can write you a four-minute story with lots of words in it. This is something I can do. This album is something I can’t do.

You’re never meant to know exactly what you’re doing with music, I don’t think. You’re always meant to be putting something on the line.’

By contrast, the infectious, dumb-smart “Zombie” is voodoo rock ‘n’ roll in The Cramps/Gun Club tradition, complete with villainous cackling and horror movie effects. But beneath the garage band fun, it’s actually the song that deals most directly with the negative effects of Jamie’s self-imposed exile.

‘Yeah… “Zombie”’s my Rocky Horror Show. The song is generally about the monotony of not doing anything. When I’m not being productive it’s an issue for me because I have restless energy. And that can easily go into the pub and… you can end up in all sorts of trouble. I like that song ‘cos its fun, even though the subject matter is dark.’

But if you’re fearing that Jamie has completely abandoned everything you liked about him in the first place… don’t. “Turn On The Light” is classic Mr T: rattling post-Clash rhythms, irreverent tips of the hat to Prince Buster, Madness and The Who, the gratuitous rhyming of the words ‘carcass’ and ‘Marcus’. ‘I still, occasionally, just blurt shit out,’ Jamie laughs.

The only fellow musicians on “Carry On The Grudge” are James Dring, singer Holly Cook and loyal co-producer Ben Bones. But, according to Jamie, ‘95%’ of what you hear is played by the boy himself.
Jamie must have had some moments, as he deliberately shunned the limelight, when he wondered if his fans had moved on? ‘What if I gave an album and nobody came’ kind of feelings?

‘Yeah. It certainly goes through your mind. But my arrogance tells me to knock yourself off your own fucking pedestal before anyone fucking else does. I’m not really into riding waves. If you’re truly good, then you’ll start another wave. It always comes down to whether your songs are good enough.’
No problem, then: the songs are better than good enough. And plenty of us feel that there has been a gaping, Jamie T-shaped hole in pop’s tattered tapestry during what has been a barren time for the edgy and smart, punk-inflected pop that Jamie T makes, and will be just plain thrilled to have him back.

There’s one last obvious question to ask. In the past, with Jamie, it’s a question that would always be dismissed, in a typical art-punk, doing-it-for-the-kids manner, as irrelevant. So, when I ask this older, wiser Jamie Treays what his ambitions are for “Carry On The Grudge”, the answer he gives seems to surprise him almost as much as me.

‘I do have ambitions this time around, which is a weird thing for me, really. My ambition is to not disappear. I’m not looking for world domination. I’d like to work, and for people to be excited to hear more stuff, and then make more stuff. And I’m hoping that’s not too much to ask.’