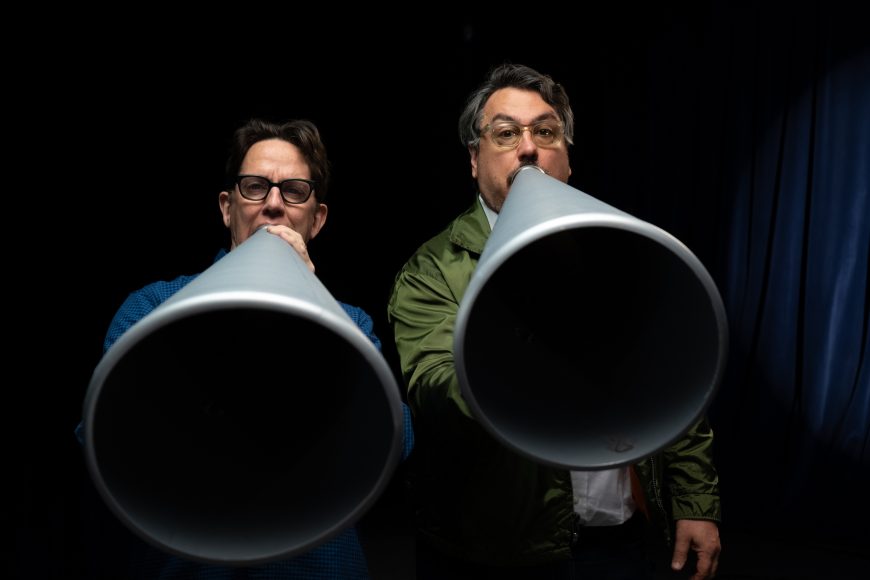 A band doesn’t tour for 35 years if the people don’t come back for more. Brooklyn originals They Might Be Giants is a beloved perpetual motion machine. The band’s melodic, upbeat, energetic, spontaneous, and often virtuosic show delivers in a way most live acts can’t. As they enter their fourth decade of music-making, the band continues to burnish their legendary status by actively recording their original songs and touring internationally. They’ve made over 20 albums, sold more than a few million, and won a couple of Grammys.

About the FLOOD show:

They Might Be Giants perform their Greatest Hits! TMBG and their barnstorming live band will deliver all of your favorite songs plus some unexpected surprises. Don’t miss this exceptional show.

They Might Be Giants have always blazed an original path, kicking down the doors of alternative rock with songs like “Don’t Let’s Start” and “Ana Ng”, and their ambitious new project BOOK takes that impulse to another level. The music from BOOK teems with the same energy, melody, and inventive songcraft, but this latest effort goes even further, introducing an immersive and fascinating album experience that blends photography, design, text, and music. True to its title, BOOK isn’t just a collection of 15 new songs: it’s a 144-page art book, created in collaboration with Brooklyn street photographer Brian Karlsson and celebrated graphic designer Paul Sahre.

Like their Dial-A-Song service, breakthrough MTV videos, and vast catalog of television work, BOOK was borne out of the duo’s relentless quest to take their music to new platforms and new places. “At this point, the album itself might seem like a quaint idea,” John Flansburgh explains. “Giving yourself real creative challenges keeps you moving forward.” John Linnell adds, “Nowadays albums are often just a collection of ones and zeroes. With BOOK we’re looking to make a more interesting object.”

Like so many creative efforts, the making of BOOK got very complicated in 2020. The band was just weeks away from completing the album when the pandemic hit. Linnell, Flansburgh, and their musical co-conspirators had to wait the better part of a year for social-distancing protocols to relax, so they could finally all work together to wrap things up.

While Linnell notes that some of BOOK’s songs are “humorously germane to the catastrophe going on around us”—like opener “Synopsis for Latecomers,” a punchy warning not to panic—these 15 songs are classic TMBG, with inspired lyrics and airtight arrangements that stay in your head long after the final note. Flansburgh describes “I Lost Thursday” as a song that’s “about the simple recognition that you’re losing touch with time, but it certainly speaks to this moment.” The song’s musical bedrock is a bassline that Linnell recorded remotely. Flansburgh compares its “pushy fusion sound” to the band’s landmark 1988 album Lincoln. “Wait Actually Yeah No” brings lilting horns. The Hammond organ drives “Lord Snowden,” which drew lyrical inspiration from Ninety-Nine Glimpses of Princess Margaret by Craig Brown. The princess and her husband, photographer Lord Snowden, “were quite louche, and I found their relationship fascinating,” Flansburgh explains. “He was a permanent outsider, always looking at her world from the remove of an artist and a commoner. For a songwriter, feeling that kind of distance is pretty relatable.”

The idea to make BOOK, well, an actual book, came from Flansburgh’s conversations with Sahre, a frequent collaborator on TMBG album covers, music videos, and the (delightful and free) Dial-A-Song app. “Paul and I had talked to a publisher about a visual history of They Might Be Giants in a big coffee-table format. It seemed daunting, so I suggested breaking it into smaller, more doable parts,” Flansburgh says. “I’ve always been a fan of street photography like Helen Levitt and Robert Frank. That style can complement lyrics very well.”

Through Sahre, he connected with Karlsson. As Flansburgh tells it, “Working with a single photographer, and specifically finding Brian, was key. Brian’s work seemed transcendent and in sync with what we were doing. It was important to me that the project was consistent visually. Too many visual efforts from musicians have a catch-all quality.”

Rather than simply printing the lyrics, Sahre used an IBM Selectric typewriter from the 1970s to create artistic layouts that add a striking new dimension to the reading experience. “Paul invested a lot of time working with this odd and kind of crude device and showed that he could do startling things with it. The rhythms of Paul’s type treatments combined with Brian’s photography are really the secret beauty of BOOK,” Flansburgh explains.

With the entire BOOK project, They Might Be Giants continue to refine their songwriting while expanding the scope of their work. So where does this release stand in the band’s estimable legacy? “It’s optimistic for us to put out something like this,” Linnell says. “We’re still here, and we’re going to be here when the dust settles, too.”

It’s a brand-new record—and book—for 2021. In a multimedia presentation that is their most visually elegant expression to date, BOOK takes They Might Be Giants to new heights.