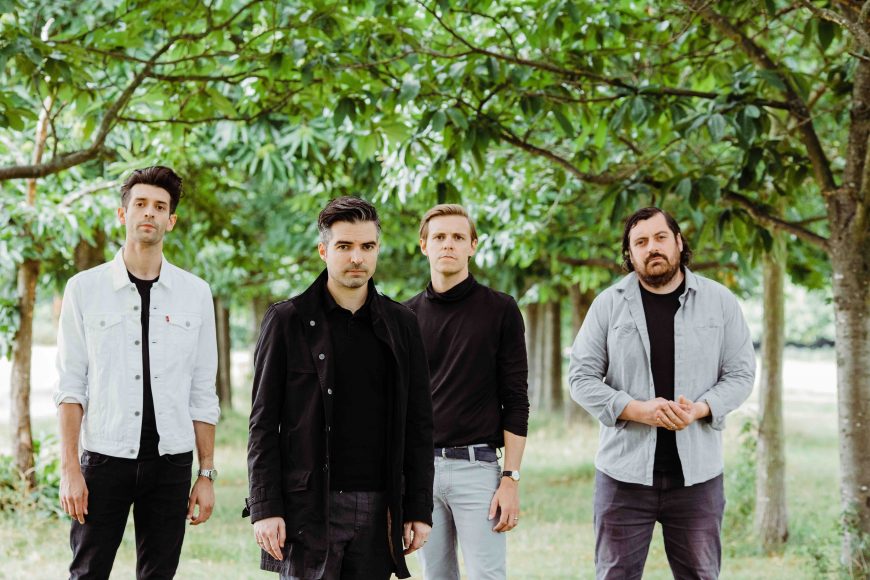 It’s said that in the current climate, survival is the true measure of success. Now in their 17th year and with their sixth album, The Boxer Rebellion are doing much, much more than that. An album born of hope through heartache, ‘Ghost Alive’ is the band’s most personal and human record to date.

Exploring the darker corners of love, loss, and grief while shining a light on shared human experience, ‘Ghost Alive’ leans on the London four-piece’s more cinematic elements for a gloriously widescreen journey.

Stripping away any excess, this album showcases the bare bones of opulent songwriting that lays at the core of The Boxer Rebellion. Rather than being crushed under the weight of melancholia, ‘Ghost Alive’ is 11 tracks that breathe with an understanding and experience. Bracingly vulnerable and achingly real, it’s a tender triumph from a band whose prime shows no signs of fading.

“This is by far our most honest album,” says frontman Nathan Nicholson. “Our only goal is to show people a different side to us.”

Bassist Adam Harrison agrees: “People need and want authenticity. We’re over trying to think about what people expect of us. We just double down on what we want to do.”

With a defiant and self-contained spirit and independent drive, that’s the sword that The Boxer Rebellion have always lived by. Formed in London in 2001 by the Britpop-obsessed but Tennessee born Nicholson and his three English friends, the band found success through turbulent times and by skirting around the edges of conformity. Oasis mogul and Creation Records founder Alan McGee signed them to his short-lived label Poptones, inviting mainstream media attention and hype. However, as their critically adored debut album ‘Exits’ showed, they had little in common with their Britpop predecessors or the growing landfill of indie that surrounded them at the time.

When the label imploded two weeks after the record’s release, the band were well and truly out on their own. “I plummeted into a really morbid state of mind,” admits Harrison. “We picked ourselves up with part-time jobs.”

During what they describe as ‘their wilderness years’, Nicholson found himself unable to even get a job in a pub, before him and Harrison found themselves in retail – a sad highlight being fitting a suit for David Dimbleby. But every spare moment was spent writing and recording. In 2009, they independently released their acclaimed sophomore album ‘Union’ – a glorious blend of indie and post-rock. Lead single ‘Evacuate’ was made iTunes’ single of the week, the media and the fans returned, they were topping polls, touring the world and even featured in rom-com ‘Going The Distance’ alongside Drew Barrymore. (“It wasn’t the coolest thing in the world, but it was really good for us,” laughs Nicholson).

They’ve spent the years since winning hearts around the globe, soundtracking a bounty of movies, games and TV shows with their cinematic grace, appearing on Jay Leno, David Letterman and the holy grail of Soccer AM, and releasing three further acclaimed records. They’re not the ‘nearly men’ you may have had them pegged for. They’ve risen from oblivion to an enterprise all of their own, and all on their own terms.

“When we felt beaten down, we never thought for a second we’d come as far as we have,” admits Harrison. “It was a lesson in humility, and everything else has been a blessing.”

To make the most of each blessing, The Boxer Rebellion do not turn down a challenge – never more so than on the sonic departure of ‘Ghost Alive’. The band set out to record an acoustic compilation record with a few new songs, before the music took hold, the direction shifted and the band found themselves with an album of their most intimate and revealing work to date.

“My dad passed away about a year ago,” reveals Nicholson. “That shaped a lot of the record. He passed about two or three weeks before we started recording the album. The songs were written, but then when we recorded them they took on new meaning. Then on last year’s tour, we were in my home town in Tennessee when Trump got elected. That was a very trying time to face, and it all played a role in the mood of the album.”

The result was 11 tracks that see the band turn away from ‘escapism’, and towards facing the demons that everyone is all too familiar with.

“I don’t think melancholy is something to be shied away from,” admits Harrison. “Generally in the wider world, especially with men, we need to recognise the legitimacy of sadness. With this record, it turns to face that a lot more. Nathan’s lyrics are more personal and the music reflects those things.”

The dedication to that mission became manifest with the single ‘Love Yourself’, as Nicholson opened up about overcoming hard times as he looked back on the loss of his mother and unborn child. The track was released to benefit the mental health charity CALM (The Campaign Against Living Miserably). “It’s about highlighting what people are going through, and knowing that we all go through that ourselves,” Nicholson continued. “It’s not about bravado. It’s not about being in a club or anything that’s been rehashed in indie songs too many times. We’re not trying to big ourselves up. We are not the second coming. We’re just saying ‘this is how we feel, this is real life’.”

Other promising teasers from the record have come with the fragile but soaring lead single ‘What The Fuck’ and the life-affirming Sigur Ros-esque lullaby of ‘Here I Am’. The latter was written for a scene in a Hollywood movie, but later didn’t fit. The scene was of a father carrying his dead daughter’s body to her resting place. The film may have gone awry, but the atmosphere remained – and a feeling of spiritual redemption that sums up the entire album.

“I’m not particularly religious, but I’ve lost both my parents,” says Nicholson. “It’s the idea of being able to self-heal to get through it. I don’t like the finite of death or the idea that you’ll never see someone again. It’s about the hope that death is not the end. It’s about not accepting finality. People live on in your life, in one way or another.”

As The Boxer Rebellion know more than anyone, nothing that’s really worth loving can truly die. Every effort must be made to make it count, doing all that you can to savour the many shades of light and dark. Nothing is black and white. There’s far more to life than mere survival.