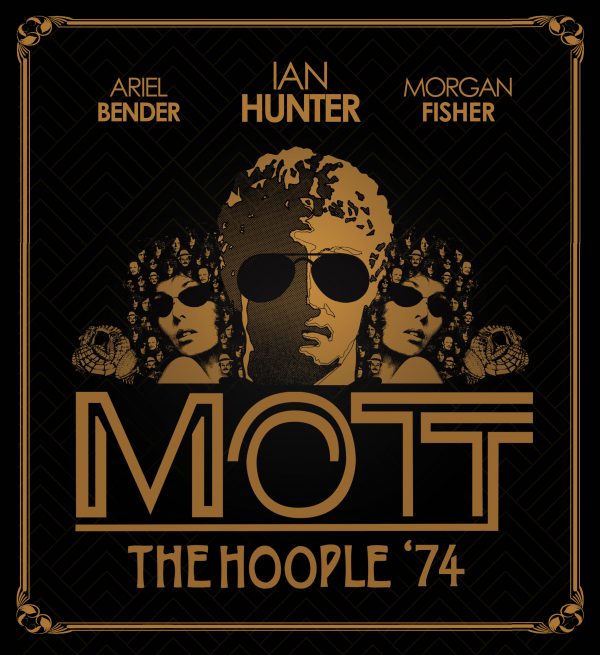 Mott the Hoople: The Golden Age of Rock ‘n’ Roll

‘Raw, fun, angry, glorious and jagged: Mott was everything’ … Brian May, Queen

‘I can honestly say if it hadn’t been for Hunter and Mott, I probably wouldn’t have been in a band’ … Joe Elliott, Def Leppard

“Mott the Who?” … “What the Hoople?” … “Mouser Hoop…” … ah, Mott the Hoople … a band that would sculpt a history as sensational as its moniker. Oozing style, attitude and wild unpredictability, they believed they could … they almost didn’t … but they did!

In the Seventies, there were rock ‘n’ roll bands and there was Mott the Hoople. Adored by a cult following, Mott was different as their focal point, Ian Hunter, oozed image and was a creative force. Hunter combined homage, honesty and killer hooks in many incredible songs, was one of the most inventive and incendiary writers of the Seventies and captured the attention of countless bands and singers.

‘If it hadn’t been for Mott, there would be no us’ … Mick Jones, The Clash

Mott the Hoople recorded four albums at Island Records – Mott the Hoople, Mad Shadows, Wildlife and Brain Capers … the latter a record that would give credence to the “Godfather of Punk” and “Precursors-of-punk” claims subsequently levelled at Ian and the band.

David Bowie, was a secret fan of Mott and an admirer of Hunter’s commanding on-stage persona, and he offered them a classic song … ‘All the Young Dudes’ … which swaggered to No.3 in the UK singles chart and propelled the band towards a mainstream audience. Mott the Hoople was re-born and Hunter felt rejuvenated, writing most of the songs for Mott which is still regarded as a classic album of the Seventies chronicling the trials, tribulations, inspirations and desperation of rock and roll. Sell-out Mott tours were punctuated by a string of successful singles penned by Ian … ‘Honaloochie Boogie’ (No.12), ‘All the Way from Memphis’ (No.10), ‘Roll Away the Stone’ (No.8) and ‘The Golden Age of Rock ‘n’ Roll’ (No.16) … while Hunter blazed across the front pages of the world’s music press.

‘When great singles weren’t that common on mid-Seventies TV shows, Mott the Hoople on Top of the Pops gave us hope. Ian Hunter is the only shades-wearing rock star that we need’ … Mickey Bradley, The Undertones

The band’s popularity was soaring but Verden Allen and Mick Ralphs left for pastures new and were replaced by Morgan Fisher and Luther Grosvenor, who adopted the name Ariel Bender … rock’s greatest alter-ego. Ian composed some fearsome and observant classics for their final studio album, The Hoople, which included the highly-charged ‘Crash Street Kidds’ and the dramatic ‘Marionette’ … Hunter’s “five-minute opera”, described as a nervous breakdown on record, and an influence on Queen’s ‘Bohemian Rhapsody’ and the David Essex movie Stardust.
In the spring of 1974 Mott the Hoople became the first rock band to sell out a week of Broadway concerts in New Y ork and ‘Led Zep’ attended Mott’s opening night. Luther Grosvenor was wonderfully philosophical reflecting that, “Led Zeppelin had simply come to Broadway to see THE greatest rock ‘n’ roll band in the world at that time – MOTT THE HOOPLE!”

‘Ian Hunter … even his name reeks of rock royalty. The swagger! The shades!
The balls to push aside Ariel Bender when the guitarist dared get too close to Hunter singing mid-song!’ … Gene Simmons, Kiss

Ian Hunter’s book Diary of a Rock ‘n’ Roll Star was also published in 1974. Filled with wise observations about the highs, lows and emptiness of stardom, it was subsequently cherished as a “bible” by John Taylor (Duran Duran), Billy Duffy (The Cult), Jim Kehr (Simple Minds) and Johnnie Depp … and was ultimately acclaimed by Q magazine as “the greatest music book ever written”.

In 1974 Mott the Hoople Live also rose high on the UK and US charts and although one reviewer wrote of the live LP … “The medley closing side two is as close to the spirit of Little Richard as anyone could hope to be in 1974” … by the end of 1974 the band split. Ian described Mott the Hoople as crazy, great times, but said, “We’d done Mott and The Hoople, and that said Mott the Hoople … so I guess there was nowhere to go.”

‘Mott the Hoople belongs in the ‘Hall of Fame’ if anyone does …
and Ian Hunter’s presence in rock ‘n’ roll is everlasting!’ … Robin Zander, Cheap Trick

Since 1975 Ian Hunter has crafted an astonishing solo career with Ian Hunter, All-American Alien Boy, You’re Never Alone with a Schizophrenic, Rant and the recent Top 40 album, Fingers Crossed … but, in 2019, ‘The Class of 74’ is back!

Mott the Hoople will play a series of British and American concerts this year, including a show at New York’s Beacon Theatre and two London gigs. “Tickets for the fantasy” … focused on The Hoople, Mott the Hoople Live and the infamous Uris Theatre Broadway concerts … are “a must” in 2019, considering the band’s amazing European festival appearances in 2018.

In a five-star review of the Mott’s recent Ramblin’ Man headlining performance, ‘Sweet Jane’, ‘Honaloochie Boogie’ and their epic encore of ‘Saturday Gigs’ were cited as monumental moments by Classic Rock who wrote: “Mott the Hoople are simply brilliant. Their energy, passion and obvious skills are a joy to behold … a band at the top of their game.”

Bio by Campbell Devine … January 2019
Author of All the Young Dudes: The Official Biography and the forthcoming book …
Rock ‘n’ Roll Sweepstakes: The Musical Journey of Ian Hunter (published by Omnibus Press)