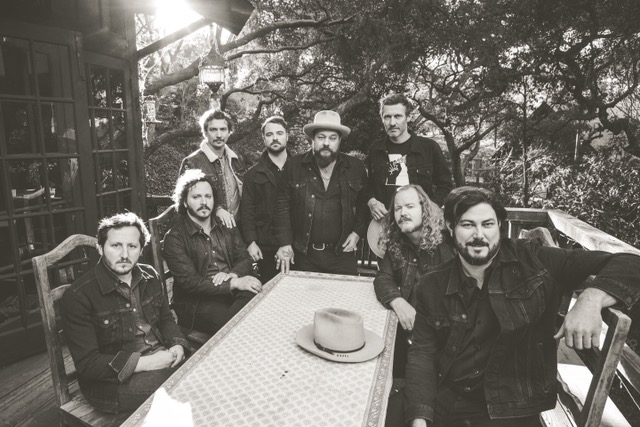 “Last time I was here I got kicked out,” says the barrel-chested singer-guitarist Nathaniel Rateliff, 39, from under a wide-brimmed hat. He’s sitting in The Spare Room, a small, swanky bar and bowling alley inside the Hollywood Roosevelt Hotel, where he’s either unrecognized or still welcome. “The lady who keeps score on the chalkboard didn’t like my comment of, ‘Wait, your only job is to keep score?’” Night Sweats bassist Joseph Pope III, 38, a blue bandana encircling his neck, throws in: “It snowballed.” Rateliff, joking (probably): “If I’d had a .38 on me, I would have fired a couple rounds into the ceiling.”

You’ll have to pardon the man. His earlier life — before fronting the hottest vintage-sounding soul octet in the country — consisted of back-breaking gigs as he worked tirelessly to get his music career off the ground, and he has had trouble getting used to the “privilege” involved with a music career that’s thriving. Which it definitely is — he just scored his second No. 1 on Billboard’s Triple A airplay chart with “You Worry Me,” a slow-but-swaggering, sax-boosted rocker about overcoming dread. It’s the first single from his band’s second album, Tearing at the Seams, out March 9 on Stax.

“You Worry Me” follows 2015’s “S.O.B.,” the world’s introduction to a burly howler who is frank about his flaws (the rowdy hit was about alcohol withdrawal) and leads a crew that plays like it’s the last bar band on earth. That the band has surpassed other nostalgia-stoking R&B outfits owes to the fact that you believe Rateliff. He calls it as he sees it, clearly, but he also talks it how he lives it. “The guy is all soul, all feeling,” says Richard Swift, who produced both Night Sweats albums. “He takes what he does more seriously than most people I know, and he’s just a goddamned sweetheart.”

Rateliff lives in Denver but grew up in tiny Hermann, Mo., where, if he had stayed, “I’d probably still be a Christian, have a bunch of little turds running around, and still do manual labor.” Adds Pope, who was raised there, too: “Probably be addicted to harder drugs than alcohol.” The guys have known each other since fourth- or fifth-grade honor choir. (When Pope mentions this, they compulsively belt out a round of “Drunken Sailor.”) “It’s a beautiful little place,” continues Pope, “but there’s not a lot of options or opportunity, and there are real hardships there. I have a lot of meth casualties in my family.”

Their ticket out was an extended missionary trip to Denver when Rateliff was 18. “We’re legends at that place,” he says with a chuckle. “I made wine under Joey’s bunk and it exploded.” He lost faith at a conversion-minded Easter service on a Hopi reservation. For Pope, it was having to proselytize the homeless. They stayed, playing open-mics and scraping by as carpenters and painters at trucking companies and bottle factories. “We were working with people in their 40s,” says Rateliff. “Having the same struggles but nothing to fall back on. We were each other’s only safety net.”

And it has been tested. At 22, Pope was diagnosed with testicular cancer, at the same time his girlfriend unexpectedly became pregnant and moved in with them. “Nathaniel shaved his head as soon as my hair started falling out, during band practice,” recalls Pope, who has been in remission since. “The biggest help was knowing I wasn’t alone, having somebody to be scared with.” Now happily married and a father of two, it’s his turn to prop up Rateliff. When I mention to the tattoo-covered frontman that Tearing at the Seams appears to be about a relationship on the brink, he panics.

“Fuck. Really? Shit. Is it that obvious?” He takes a breath. “Well, I’m getting divorced. I love my wife but we’ve had a tumultuous relationship. I really feel like every record I made was about the same thing, and I just finally had the balls to say goodbye. I wish I could change some of the things that have happened, but…” His voice breaks, and Pope puts a hand on his leg. “I’m sorry,” says Rateliff through tears. The irony isn’t lost on him: He has been living his dream, at last, but crying in recording sessions and sleeping on a single bed in drummer Pat Meese’s doorless basement.

Rateliff’s music has always been intensely personal. He and Pope’s first band, Born in the Flood, leaned emo. Their next, The Wheel, was chamber-folk. Then came 2010’s In Memory of Loss, a mostly acoustic, sort-of solo (Pope contributed) LP for Rounder that led to gigs with Mumford & Sons and The Lumineers. Then, “We were dropped,” says Pope. They were near quitting when Rateliff, frustrated, banged out a couple of tunes in line with the first secular music he’d heard at 13, in a stash of records left behind by his father who died in a car crash: Otis Redding, Van Morrison, Booker T.

“He sent me those first Night Sweats demos and that was the moment I knew what I was doing with my life,” says Pope. Needless to say, this is the most successful run they’ve had yet. Rateliff quit working as a gardener after “S.O.B.” took off, and he reflexively kneads the aches in his hands as he talks about it. But asked which gig he’s happiest to never do again, he shakes his head: “I’ve always dove into whatever job I had, even when I was scrubbing toilets. You’re doing a thing, so actually fucking do it.”

This article originally appeared in the March 3 issue of Billboard.