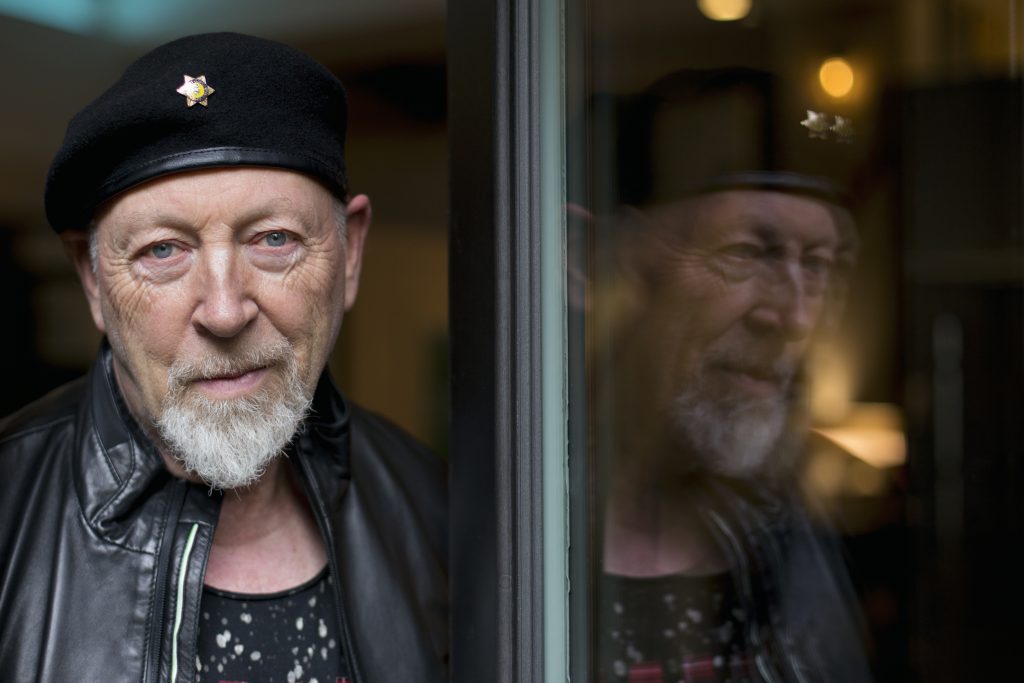 After fifty years and nearly twenty solo albums, the low-key guitar god finds new ways to renew old sentiments as a singer, songwriter, and instrumentalist on what may be his best album this century.

Richard Thompson penned “Rattle Within” for the new 13 Rivers, but the song’s worries suggest it could just as easily have been written during the Black Plague as in our own plagued time. Over the racket of rattletrap percussion, Thompson excoriates the quackery of religious leaders, contemplates a dark self that’s “living right there inside your skin,” and poses this nervous question: “Who’s going to save you from the rattle within?” He then launches into a jagged and ominous solo, serrated as though he were unspooling barbed wire. Thompson’s playing retains a stomping folk-dance quality reminiscent of his innovations in Fairport Convention fifty years ago. By the end, though, he collapses into a din that has more in common with the punk rock he was already too old for by the late ’70s.

Talking about a guitar player’s chops feels odd and even old-fashioned in 2018, especially when that guitar player is an old white guy whose career predates Woodstock. But Thompson was a folk descendant, not a blues rocker, a lineage that sometimes excluded him from being cited as a guitar god or celebrated with the same reverence as his note-bending peers. But here he is, a half-century after debuting with Fairport, still making records of incisive originals while developing as a guitarist, undistracted by reunion rumors and holiday baubles. Now in his late sixties, he remains a distinctive singer with a low burr, as capable of a sly joke as a sincere prayer. He is a songwriter of remarkable insight who can burrow into a metaphor and renew a familiar sentiment. And he remains a deft and inventive instrumentalist who, even after nearly twenty solo records (not including his sterling decade with Linda), finds new ways to play the same notes.

If 13 Rivers is Thompson’s best album of the 2010s and perhaps his best of the 21st century, it’s not because he emphasizes those three elements equally. Rather, it’s because he puts those aspects into a strange, spirited conversation. For 13 Rivers, he assembled a tight, versatile rock combo—the rhythm section of bassist Taras Prodaniuk and drummer Michael Jerome, along with guitarist Bobby Eichorn, who makes the most of a very redundant job. Pondering life and death, happiness and despair, movement and stagnation, Thompson writes as someone who knows he has more years behind him than ahead, though he sings with an arched eyebrow and an appreciation for the irony in trading youth for wisdom. On “O Cinderella,” he sounds as surprised as anybody else that he might want to settle down and don an apron: “I’m not very house-trained, it’s true/But I want to make cupcakes with you.” There’s something lusty and chagrined in the way he exclaims “cupcakes,” allowing the line to double as a good joke and sincere wish.

And then there is Thompson’s guitar, which rambles or cavorts through every song, underscoring some sentiments and undercutting others, jostling against the melodies like a gremlin in the mix. Thompson has been in acoustic mode for most of the 2010s, with two collections of new acoustic versions of old electric songs surrounding a mostly unplugged, Jeff Tweedy-helmed album. Thompson is an amazing acoustic player, but he’s even better when plugged in, where he toggles gracefully between rhythm and lead, texture and melody. “Bones of Gilead” opens with a mathematical staccato riff, as though mimicking the countdown clock to Armageddon; by the time he rolls into a rambling solo, there’s no dread, just a kind of gee-whiz excitement. During closer “Shaking the Gates,” he plays like he’s scoring a film, careful to stay out of the way while weaving notes around the melody. “I’m shaking, I’m shaking,” he sings, as though genuflecting before some deity. Then he amends the statement: “Im shaking the gates.” Thompson’s getting along in years, but he’ll be damned if he’s going to sound old.