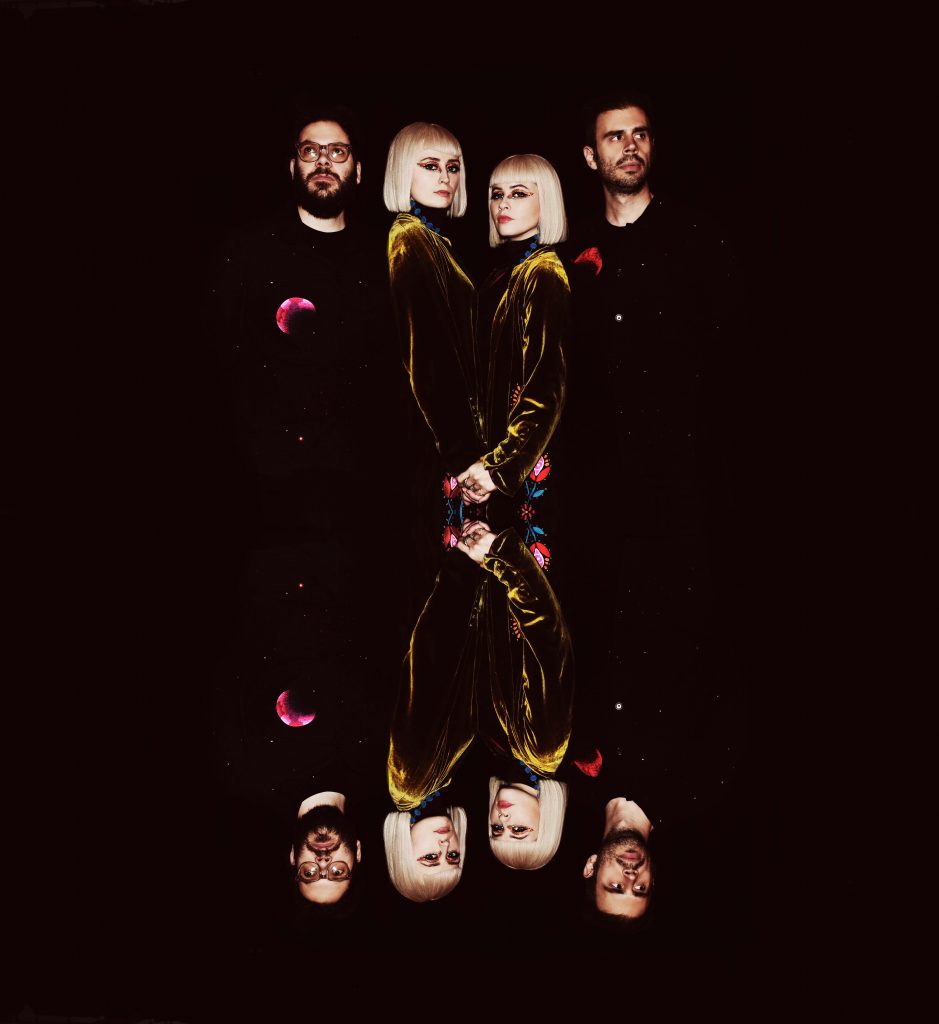 You would hardly call Lucius all-business — not when the group, led by the twinned lead vocals of Holly Laessig and Jess Wolfe, eschews pop norms to lead listeners to such playful or exquisitely haunted places. But they’ve kept the focus on benefitting some of Los Angeles’ most beloved independent retail stores and restaurants with a livestream performance series, “Turning It Around,” that wraps up tonight with the debut of a set of all-new material the women have been working on in quarantine.

Lucius is well known for its support on other artists’ records and concerts (Wolfe and Laessig may be best recognized by the rock masses as Roger Waters’ vocal support team of many years). So it’s no surprise they were able to pull in some favors of their own via the major names who’ve served as “opening acts” for this series of Thursday night livestreams, including Brandi Carlile, Sheryl Crow and Jim James. For tonight’s series capper, two openers are on board: Courtney Barnett and another fearsome vocal duo, the War & Treaty. Tickets for tonight’s show, which are $15, can be found here (along with discounted passes for archived versions of the previous shows).

The group’s mindfulness about giving back led to carefully curating, along with the music and guests, which L.A. indie shops and eateries that have been hard-hit by the pandemic would benefit from the proceeds. In week one, it was a pair of bookstores, the Last Bookstore downtown and Stories in Echo Park; in week two, the restaurants Lasa in Chinatown and Bar Covell in Los Feliz; and last week, the record shops Going Underground Records in East Hollywood and Permanent Records in Cypress Park. For tonight’s series capper, Lucius chose three retail shops — Offerings, Roam Vintage and Olivers — as recipients. Proceeds from the band’s online merch is also being divvied up between the benefitting outlets during the series.

“It’s looking like it’ll be somewhere around $70,000, split between the businesses,” by the time the series wraps up tonight, says Wolfe. “It’s not a ton, but maybe it’s a month’s rent. Maybe it’s somebody home rent. Maybe it’s a salary. Whatever it can be, hopefully it’s something that really just lightens the load for even a moment. We were feeling a bit helpless. And obviously there’s been just a storm of live concerts, online concerts, fundraising. And we’re trying to be mindful of what we’re supporting, and hearing about the difficulties that all these small businesses are going through amidst the storm  — Hurricane Corona as we call it — has been really heartbreaking. We’re getting some new eyes on some of these businesses, but also trying to do our best to actually raise a few bucks and help ‘em out during a crisis.”

Although the concert streams are about the music, the women of Lucius have also promoted the local businesses by conducting interviews with some of their owner-operators on their Instagram Live account every Wednesday in the lead-up to the shows. “It’s just to show people the story or face behind the name and talk a little bit about how they got their start, what has changed and how they’re struggling,” Wolfe says. “And I think when people see a real person there, they’re much more likely to support and I think it affects people on a deeper level. It would me, of course.”

It’s not Lucius’ first fundraiser during the pandemic. Early on in lockdown, they and Courtney Barnett held an all-day fundraiser that raised about $40,000 for underprivileged communities’ health supplies. That singular event featured piped-in performances from Crow, the War on Drugs, Kurt Vile, Nathaniel Rateliff, Lukas Nelson, Emily King… and one guest who did show up in person, social distancing protocols notwithstanding: neighbor Fred Armisen showed up to strum along on a guitar, through a closed window, with gloves on. The sight of Lucius in all-day pajamas for that show — something they revived again for one of their nighttime July performances — led them to create a Lucius-branded PJs line. “And they’re pretty cute, by the way,” points out Laessig.

On a non-charitable level, they also held some Zoom gatherings for fans in the lead-up to the current series, including dance parties and open mic nights, like the ones where they got their start when living in New York in the late 2000s. Roger Waters even participated in one such recent informal and otherwise fan-filled hootenanny. “During our open mic night, we had Roger come in and do a song,” says Laessig. “But he couldn’t get his laptop to work, so he called up our cell phones, and then we played the performance from the phone through Facetime to Instagram Live, holding the phone up to the iPad. It was pretty cute, though. It was very low-fi… low-fi Roger Waters. We’re so lucky that we get to work with so many different types of people and all these people who want to do good for their communities and for the world, and so they ask us, we ask them — we’re family in all of this.”

For the first of their four July livestreams, Lucius performed their official debut album, “Wildewomen”; for another, they revived a little-known 2009 pre-debut album whose few CD copies typically go for hundreds of dollars on eBay and Amazon, “Songs from Bromley House”; another week was all covers, from Massive Attack’s “Teardrop” (see above) to the Grateful Dead’s “Uncle John’s Band” (which they’d previously recorded for a Dead tribute album at producer Aaron Dessner’s behest).

Tonight, says Wolfe, “We’re doing all new songs, most of which we’ve never performed before.” “And most of which we’ve written in quarantine,” adds Laessig. Normally, most musicians wouldn’t be eager to debut up to an hour and a half’s worth of new material that hasn’t even graced the recording studio yet. But, says Laessig, “I think it’s like a little bit freeing because of the whole situation of isolation and the quarantine. If we weren’t in this situation, maybe we’d be thinking, ‘Oh, we need to present it perfectly the first time it’s presented.’ And there’s not that pressure for some reason, I guess, because everyone’s in this sort of similar boat. That pressure is a little bit alleviated and you just want to share things with people and  just want to connect. Also, it’s not permanent. It’s out there for like 72 hours and then it’s gone.”

“And it’s through a screen and not a sea of judging eyes,” says Wolfe, “so it’s a little bit easier. We’re singing to each other, really.”

How much new material is there to perform, given that the next album hasn’t even been recorded yet?

Wolfe admits that their recent level of output is “pretty nuts. I don’t know how that’s happened, really. We’ve had writers’ block for the last three years, so I guess we just needed a lockdown situation in order to free our minds.” They’ve also been co-writing for the first time, with collaborators including Natalie Hemby, Lori McKenna, Trent Dabbs and Liz Rose.

The harmonies between the two women sound so intricate that it’s hard to imagine they’re achieved without weeks of intense rehearsals, especially on new material or on a performance of an 11-year-old release they’ve rarely revived. But they say there’s a naturalness to their all-joint lead singing that isn’t quite so rigorous as it might seem.

“I think we know our voices so well that even if we don’t do the part that was on the record or whatever it is, we can kind of navigate. It’s just the playing part that is nerve-wracking,” says Laessig. “It’s true,” adds Wolfe. “We do have this sort of thing like we know what the other person is going to do. Or not do.”

“Like you knew I accidentally changed the key of ‘You’ll Never Walk Alone,’” laughs Laessig. “Luckily it was a cappella, but it was very awkward for that one moment, but you were right there with me. Yeah, we’re very lucky for that. Psychic powers… Psychic twins.”

“Psychic Twin is a band, right?” asks Laessig. “That’s a great name. I wish that was our band name.”

“Instead of being named after my dead dog,” says Wolfe.