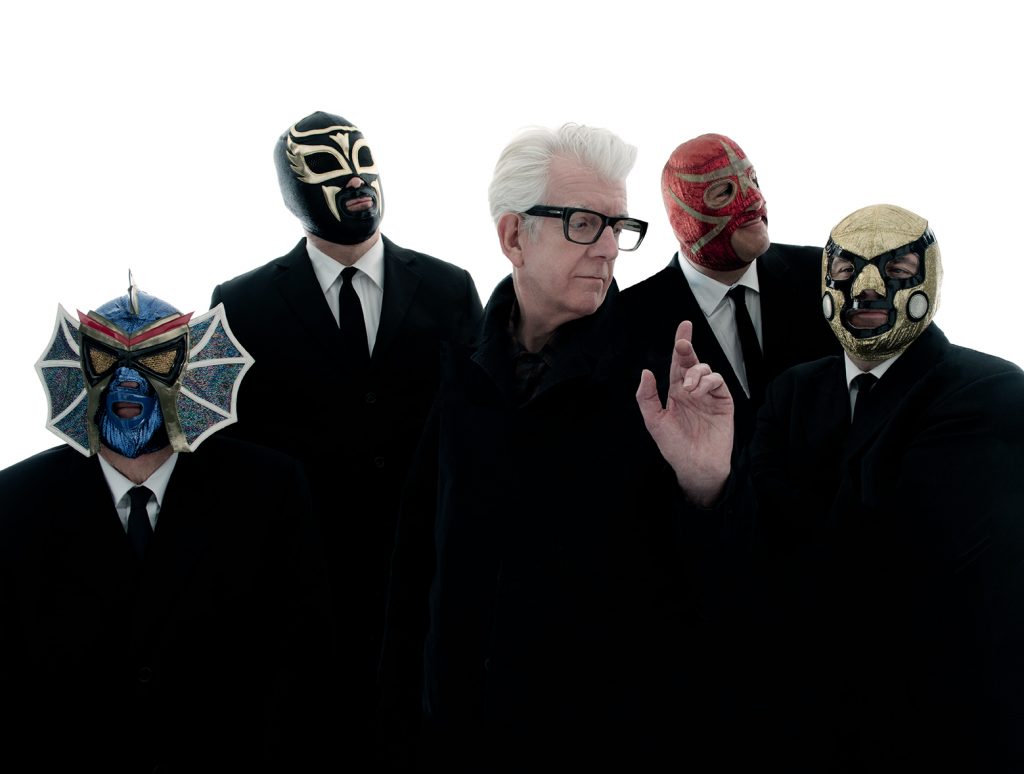 Nail down the lawn furniture, Nick Lowe is rocking out again, with the rumbling rockabilly of “Tokyo Bay” from the Tokyo Bay / Crying Inside EP. The man who blazed trails in pub-rock, punk, new-wave, and power-pop has spent the last couple of decades operating chiefly in crooner mode. But hooking up with postmodern surf-rockers Los Straitjackets over the last couple of years seems to have helped edge him back toward turning things up again.

A lifelong lover of first-generation rock and roll, Lowe has been incorporating it into his records since the start of his solo career in the ’70s, and Los Straitjackets have proven to be enablers on that front.

“I’ve always had a penchant for this kind of ‘rocking-hard-whilst-hardly rocking’ skiffle style of music,” Lowe tells NPR. “The difficulty nowadays is finding people who understand how to make it happen, because in the wrong hands it can easily turn into something that’s a whole lot less funny. I have to work quite hard to achieve it, but luckily Los Straitjackets are premier rock and roll entertainers to whom this phenomenon occurs naturally.”

But while “Tokyo Bay” bops and swings like a song from six decades ago, its lyrics aren’t your traditional rockabilly fare. Lowe has a long reputation for wickedly tongue-in-cheek humor, and here he penned a tune worthy of a travel commercial for a rather unpalatable place. “Anyone who has ridden the 60-odd miles from Narita — Tokyo’s main airport — to the city will have experienced that part of the journey where, for what seems like an eternity, the main road follows the bay shore,” he explains.

“The bay itself is a vast bight dotted with rust-caked commercial vessels,” Lowe continues, “fringed with port facilities and industrial sites featuring giant chemical storage containers and ranks of tall chimneys belching out clouds of smoke in a variety of sinister hues. Contemplating its awesome bleakness through a bus window a while ago I thought it might be fun to try to write a song where the bay is presented as a romantic and desirable destination; palm trees, coral reefs, maidens on the sand, etc. In fact, the polar opposite of the way it actually is, and this little rockabilly number turned up.”

But even if the arch conceit of Lowe’s lyrics were to completely pass you by, the rich twang of Eddie Angel and Greg Townson’s guitars and the gritty-but-graceful propulsion of bassist Pete Curry and drummer Chris Sprague push the whole thing along with an irresistible energy. As he inches toward septuagenarian status, the man who dubbed his 1978 debut album Jesus of Cool proves definitively that rock and roll isn’t just a young man’s game.