Forty Years In, Yo La Tengo Are Still Making It Up as They Go 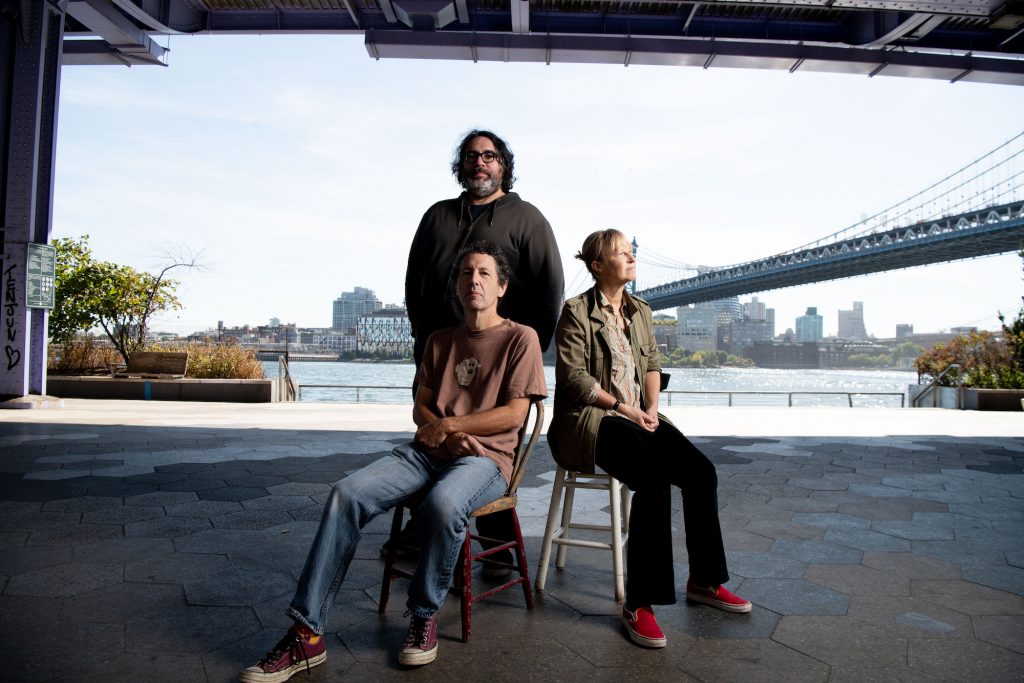 This year brings a clutch of major anniversaries for Yo La Tengo. It has been 30 years since the Hoboken, New Jersey trio signed to Matador with 1993’s Painful and since James McNew—the group’s 15th bassist—effectively graduated from hired hand to integral member. What’s more, 2023 marks 40 years since the first public performance from Georgia and Those Guys—an early incarnation of the long-running musical partnership of co-founders Georgia Hubley and Ira Kaplan, who had begun playing together the year before, tentatively finding their voices as they overcame their mutual shyness. So how do these famously mild-mannered musicians celebrate? With an album called, not exactly optimistically, This Stupid World.

Yet when I connect with the three in the first days of the new year over Zoom, they are in fine spirits. Hubley and Kaplan are relaxing on the sofa, with a pot of beans simmering in the kitchen, and McNew sits seatbelted in a parked car in Brooklyn. The trio is still recovering from eight nights of their fabled Hanukkah concerts, which wrapped up on December 25. To call the annual series a heroic undertaking would be a profound understatement: Benefitting a range of charities, this year’s shows included a staggering array of openers (Sun Ra Arkestra, the Raincoats’ Gina Birch); surprise guests (Mac McCaughan, Marky Ramone, Lucy Dacus); stand-up comedians (David Cross, Janeane Garofalo); readings (Calvin Trillin); cover songs (“I Wanna Be Sedated,” “Candy Says”); and even custom mix CDs commissioned for the occasion, compiled by Dawn Richard, Nick Lowe, and Slayer’s Dave Lombardo, of all people.

“It’s incredibly rewarding but almost insane,” says Kaplan of the holiday effort. While lining up all the moving pieces takes months, he adds, “What we’re actually going to play each night comes together in the couple of hours we’re sound checking.” When Yo La Tengo invited Sonic Youth’s Steve Shelley to sit in with them for the entirety of their second-night set, the drummer pleaded, “I don’t know what I’m doing.” “You don’t have to,” Kaplan told him, adding, “We don’t know what we’re doing.” He only hopes that Yo La Tengo’s faith in their collaborators will spark “something interesting.”

That trust in the power of spontaneity also fueled the creation of This Stupid World. Written, recorded, and self-produced in the trio’s rehearsal space in Hoboken, the record began organically, as an outgrowth of simply playing together on a regular basis without much of an agenda. But with McNew dutifully keeping mics set up and the recorder running, everything gets logged on hard drives spilling over with half-hour-long jams. “There’s a lot to sift through,” admits Hubley.

Much of it doesn’t amount to anything, though the most incandescent takes yield songs that may remain virtually unchanged in their final versions. And then there are the kernels of possibility—the unwieldy blocks of sonic marble that the trio carves down, edit by edit and overdub by overdub, into the form of a finished song. “It is pretty aimless at first,” Kaplan says. “Eventually, the aim enters into it.”

However sprawling the album’s origins, the overall feel of This Stupid World is remarkably compact. There are ballads and there are rippers; there are nods to classic mid-’90s indie rock and unexpected forays into dubby electronica. But the nine-song, 49-minute tracklist is unusually lean. Nothing reaches the eight-minute mark, and the prevailing mood is that of three lifelong friends riffing on each others’ ideas in real time.

“In one sense, these songs are finished,” says McNew. “But now we figure out how to play them in front of people, so they begin this second life. That holds for every song that this band has come up with since the ’80s. It’s all up for grabs. It’s always changing. It’s alive.”

Pitchfork: I’ve been reading Jesse Jarnow’s 2012 biography of Yo La Tengo, which feels like a portrait of a lost world before gentrification and the internet irrevocably changed indie rock. Yet you’re still out there doing it yourselves, on your own terms. What accounts for your longevity—is it luck, perseverance, or both?

Georgia Hubley: I don’t think we know what else we would do.

Ira Kaplan: Perseverance and luck have a lot to do with it. One thing we have gotten increasingly good at is not setting goals for ourselves, but trying to appreciate what’s in front of us at any given moment and making that work. We’re not frustrated by what we haven’t achieved, because we’re not really out to achieve that much. We’re just out to appreciate what’s going on.Ira, you once told The Wire that the band’s changes from record to record reflected a growing courage—that on every album, you could say what you had gotten braver about. Where would This Stupid World fall on that continuum?

IK: Well, that we did it ourselves, without an arbiter.

James McNew: Until the mastering date, there was nobody else involved. This was done in total seclusion..

IK: Trusting ourselves to clean up whatever mess we make was a big difference. Do you think there’s a particular mood or energy that this album tries to capture?

IK: No. There might be one, but it would be accidental. We just don’t go in with that kind of aspiration.

IK: It started as the lyric, and it was just so resonant. We’ve never had a title song before. We tried to avoid it at times. We were going to give either the album or the song a different name, and then it felt like we were twisting ourselves into a pretzel to avoid doing it, merely because we had never done it before. It just seemed to fit. What was it about the phrase that felt like it encapsulated the album?

IK: It’s the mood we’re in, which I assume everyone’s in; even people that we don’t see eye to eye with on many things would agree with the title. They might have a different reason for feeling that way, but I think we can all agree. The song “This Stupid World” feels unusual for you guys. It has the jammy noise freakout vibe, but it’s also kind of muted, and the vocals are really serene and mantra-like.

JM: I don’t even remember if we said anything to each other before we started playing that piece of music that day. Ira played guitar, and somehow Georgia and I wound up on instruments that we don’t normally play, and it felt great. We threw up mics immediately, and had the track that afternoon.

IK: It was so much fun to play, and I kept thinking maybe we should stop, because we could do this for a month, just making this noise. The singing was not part of it at all when we were recording the music, but listening back to it, the singing seems really natural to the mood we had. It feels great to me when we all sing together.

IK: It’s like that Bob Marley song.“I Can Hear the Heart Blobbing as One.”

IK: Something we talked about was just keeping it spontaneous, even when it’s not. A lot of it has been worked over a great deal. But it’s like stand-up comedy. You watch a stand-up comic and it looks like this thought has just appeared in their head, whereas actually they’ve tried out the joke for a month—changing this phrase, changing that emphasis, to make it sound tossed off.Lyrically, there are some pretty heavy themes—the passage of time, loss, death. Were those consciously on your minds before writing, or did they crystallize along the way? At what point did the lyrics enter the picture?

IK: At the end. The phrase “fall out of time,” from “Fallout,” came about while we were practicing the song. Not necessarily to be used in the future, just kind of out of desperation—surely there must be something there to hang a song on. It’s a struggle for us to make the words appear, hopefully, to be part of that organic process. It’s not the part that comes most naturally to any of us.How much are you drawing from lived experiences, and how much are you writing universal truths? There are a few songs that feel very specific, like the grief of “Aselestine,” or the couple’s fight in “Apology Letter,” with that great line about “one of my delightful quirks, what a jerk,” something I imagine resonates with a lot of people in long-term relationships.

IK: Well, it’s funny. I hope they ring true. But one of those two songs had a specific real-life inspiration and the other didn’t. It’d be nice if you couldn’t tell which is which.