At Home, Forever and Ever, With Dean & Britta 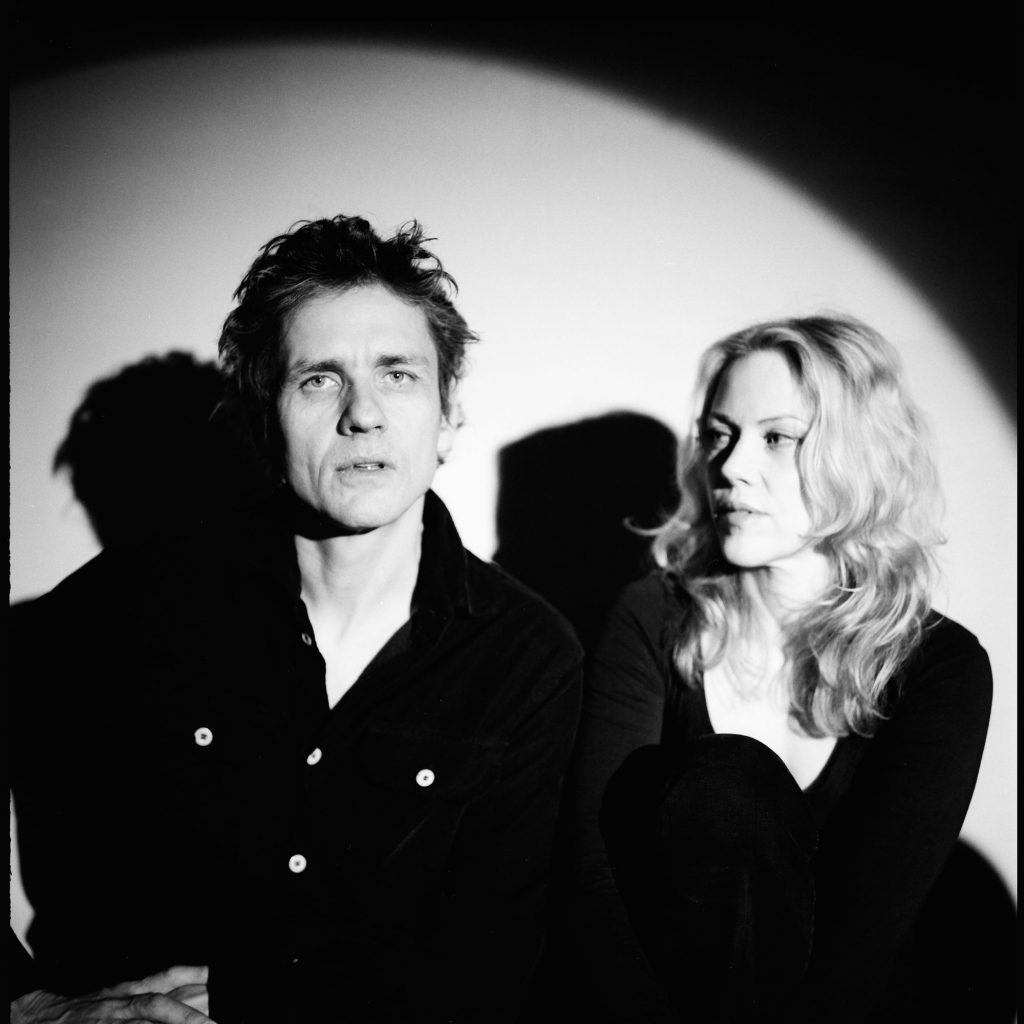 LOS ANGELES — In the sun-speckled living room of his East Los Angeles home, Dean Wareham starts the performance by reporting the air quality index. It’s 80, he notes, which is “good, lately,” given the wildfires that had recently blanketed the area with smoke. He peers out the window toward the San Gabriel Mountains. “In the distance is the Mount Wilson Observatory,” he points out. “They say the flames came within five feet of there.”

Usually, an apocalyptic weather forecast would be redundant to deliver to an audience. But in this case the audience is tuning in to a live stream, and thus scattered across the globe — notably so during this midday performance — which is catered to viewers across the Atlantic. Wareham is playing with Britta Phillips, his bandmate in the group Luna, whom Rolling Stone once called “the greatest rock-and-roll band no one’s heard of” in a review of the 1997 album “Pup Tent.” The statement was meant as a compliment but morphed into an indictment; copies of the review were left on desks at Elektra Records, the band’s label at the time, as a way of highlighting a marketing failure.

For her part, Phillips didn’t need to commute to the show, because this is her home, too. Married since 2006, Wareham and Phillips are an indie-rock power couple: Besides their work in Luna, which reunited in 2015 after a 10-year breakup, they also record and perform regularly as Dean & Britta, a sort of Lee Hazlewood & Nancy Sinatra for the dream-pop scene. Their pandemic live streams, in which they are just as likely to pull out a Luna fan-favorite like “Anesthesia” as they are to stop and read an Edward Lear poem, feel like scenes out of a private party you would normally not be invited to.

“We didn’t want to do a live stream,” Phillips explains, sitting at a picnic table with Wareham in their yard. But after they participated in one for a benefit event, she explains, they saw the potential: “It was a nice communal feeling after feeling isolated.”

During the past seven months, Dean & Britta have been stuck doing what everyone has been doing — staying home and watching shows like “PEN15” and baking stress-induced brownies. But like most of those lucky enough to be able to do so, they’re also figuring out ways to work from home. Besides the live streams, they’re hawking merchandise, like T-shirts, tote bags and the new “Quarantine Tapes” singles collection compiled from their recent sets, which they mostly package and mail out themselves.

It’s a slog, but after decades of being nickel-and-dimed by labels, the freedom to hustle how they choose isn’t something they take for granted. “Now there’s an ability to extend your careers and connect directly with people in ways that were impossible previously,” Wareham says. “In the past, you’d get dropped from a label and have to quit music altogether. You’d be like, ‘That’s it.’ ”

As the sun starts to set on yet another sweltering, late September day, Wareham and Phillips sit on either side of bowls of chips and guacamole, and look quite the part of a chic artistic couple. Phillips has a dash of gray and Wareham has a splash of it, and both wear stylish warm-weather clothes, elegant but not fussy. In conversation, Wareham’s lingering Kiwi accent fights its way through, and he’s prone to bring up media they’ve been enjoying — Zadie Smith’s essay “Joy,” the Bob Dylan song “Murder Most Foul,” Chris Stamey’s book “A Spy in the House of Loud,” etc. — while sometimes asking his wife for help remembering the names.

But as closely as the couple fit together now, they come from drastically different backgrounds. Wareham was born in New Zealand in 1963, and his family moved to New York when he was 14. His self-described “bourgeois” upbringing led him to Harvard, where he formed the band Galaxie 500 with two fellow students, Naomi Yang and Damon Krukowski, after graduation. The first two records they made together, 1988’s “Today” and 1989’s “On Fire,” are generally regarded as minimalist masterpieces — the blueprint for acts like Beach House and Real Estate.

Phillips was also born in 1963, though she was raised in Pennsylvania by followers of the controversial Freud disciple Wilhelm Reich, a group that was hands-off in terms of child-rearing. “All about expressing, expressing, and not repressing anything,” she says. “And no rules.”

At 15 she left home to “live with a drug dealer,” but her father, a music teacher in New York, eventually started looking after her. In 1985, he got her an audition for a role on the animated show “Jem,” about a music company owner who’s secretly a rock star. Phillips got the part, and sang the theme song. By 1990 she formed the “shoegaze” group the Belltower with future Fountains of Wayne guitarist Jody Porter, whom she married. They eventually divorced, and the band broke up.

When Phillips and Wareham first met in 2000, she was auditioning to be Luna’s new bass player. She was hired, and soon after they became romantically involved. This was a particularly complicated development because Wareham had a wife and a newborn baby at the time. The messy saga was chronicled in his 2008 memoir “Black Postcards” and the 2002 Luna album “Romantica.” (“Once we have dreams/Now we have schemes,” Wareham sings on “Renée Is Crying.”)

“It was painful and scandalous and terrible for a while,” Phillips says. “When you’re in love or lust or both, it’s very difficult to not do what you’re going to do. We tried.”

Things have settled down considerably for the couple since then. Longtime New Yorkers, they moved to Los Angeles in 2013 to be closer to Wareham’s son, Jack, now a senior at the University of California at Berkeley. Despite California being on fire all the time, they enjoy the lack of blizzards and don’t plan on returning east anytime soon. “New York City could really beat you down,” Wareham says.

Los Angeles might make better sense for the couple anyway, given their work in the film industry. Wareham has been a regular collaborator with writer-director Noah Baumbach since 1997, when Luna was picked to write original music for the film “Mr. Jealousy.” Dean & Britta have scored two of Baumbach’s films since — 2005’s “The Squid and the Whale” and 2015’s “Mistress America” — and Wareham has small roles in almost every Baumbach movie as well.

Baumbach says that he and Wareham first met at Great Jones Cafe in Manhattan to discuss “Mr. Jealousy,” and soon after a friendship formed. “He suggested the andouille sausage sandwich,” Baumbach says via email. “I’ve pretty much taken his advice on everything since.”

Baumbach and his partner, writer-director Greta Gerwig, remain close with Wareham and Phillips, whether they’re all working on a project or not. “Whenever we come to their house,” he says, “I’m always struck by what Dean’s wearing, what he and Britta are listening to, what books they’re reading, art on the walls. Greta and I inevitably return home inspired.”

Gerwig says she was a fan of Galaxie 500 and Luna before she met Wareham and Phillips (“key picks for mix tapes, always, still”), but it’s their presence as actors in a scene with her in “Frances Ha,” the 2012 film she co-wrote with Baumbach, that sticks out: “My character is talking to the two of them far too intimately for people she’s just met,” she explains via email, “and they were so perfectly empathetic but not sappy, interested but also not overly involved. It was one of the first times I had really hung out with them, and somehow the character of Frances was able to shine through because they were holding a space for it.”

One of the most mixtape-friendly Galaxie 500 songs is “Tugboat,” which is inspired by the story of Velvet Underground member Sterling Morrison giving up music to work on a tugboat. “I don’t wanna stay at your party/I don’t wanna talk with your friends/I don’t wanna vote for your president/I just wanna be your tugboat captain,” Wareham sings over just two chords played on repeat, more a mantra than a progression.

Wareham and Phillips perform that song regularly these days, clearly not interested in giving up music anytime soon themselves — or each other. They collaborate well, after all: Wareham is better at big-picture ideas and Phillips is better at executing the little details, as they’ll explain.

“I know how difficult it can be when you’re a couple and most of your work is together as well,” says Sean Eden, who plays guitar in Luna. “They’re around each other almost all the time. You have to have a really strong, healthy relationship for that to continue for a long time, ’cause it’s hard to be around anybody, no matter how crazy you are about them, 24/7.”AD

One key factor, according to Phillips, is that they actually aren’t around each other 24/7; they give each other space during the day, for the most part, working in different parts of the house. And when Wareham is being a “cranky jerk,” like he says he can be, he’s usually quick to realize it and apologize. “Sometimes Britta’s like, ‘You’re being a real [jerk],’ and I’m like, ‘Yes, you’re right, I am. That is true,’ ” he laughs.

In short, they make it work, even — especially? — when the world is a mess. And they’re continuing to work, too: Both Wareham and Phillips are writing new original music, although it’s going a bit slower than it used to. As far as his songwriting goes, Wareham blames the lyrics, which he’s more painstaking about than he used to be.

When she hears this, Phillips reminds him that lyrics really don’t have to be as fine-tuned as poetry.

“It’s true,” he says, “You can make people cry with the music and the lyric can be ‘Be-bop-a-lula, she’s my baby.’ ” After a beat, he thinks of another example: “Or ‘I don’t wanna stay at your party/I don’t wanna talk with your friends.’ ”