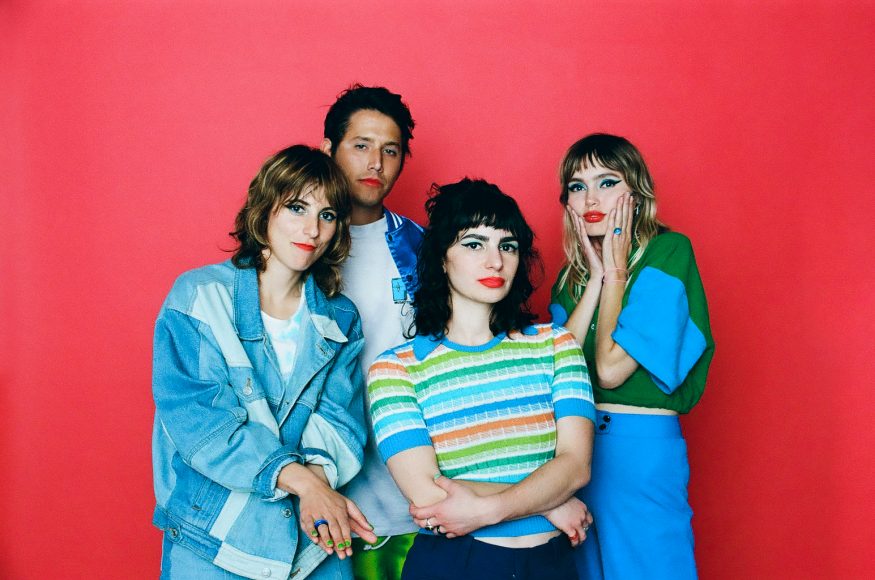 The Paranoyds have the kind of connection people only dream of: as non-biological sisters who have known each other longer than they haven’t and speak a language that no one else can understand.

With a bond that began in preschool, Laila Hashemi (keys/vocals) and Lexi Funston (guitar/vocals) were always inseparable, so when they met Staz Lindes (bass/vocals) in ninth grade, it felt like they had known her all along. After all, they were a “package deal.” In high school, they began making music together in a friend’s laundry room and their relationship just blossomed from there. When it came time to add in a drummer, David Ruiz, who joined the band in 2015, fit in like he had been there all along. It’s that special bond that has solidified their relationship as bandmates who connect seamlessly to one another’s energy on stage—and best friends. And it’s the one thing that has remained a constant throughout the past two years.

Like so many others, the pandemic brought about unexpected change for The Paranoyds—both good and bad. Before the pandemic, the Los Angeles-based group was invited to perform at a Third Man Records showcase at SXSW. The opportunity ultimately led to the group signing to the label in 2021.

The band’s forthcoming release and first on Third Man, Talk Talk Talk, is rooted in the life-altering transformation they experienced since 2020. The process began back in April 2020 when they drove to San Francisco to record seven demos from the album at John Vanderslice’s Tiny Telephone Studios. There, the band’s unbreakable friendship was tested once again as they ended up crashing at the studio for a week with no air conditioning or showers.

The time and space they were able to take (in and out of that studio) allowed them to grow and find confidence in experimentation. “You can tell the intention and the delivery is just a little bit more matured,” says Staz. While the foundational elements that have always been at the core of the band’s music—like tongue-in-cheek lyrics—remain, the band felt much more comfortable toying with experimental sounds, like sampling, setting up multi-layered drum tracks, and including tons of vintage synthesizers, for instance. It helped that the band enlisted Froth bandleader JooJoo Ashworth (Automatic, SASAMI, Dummy) as producer to re-record the tracks they initially demoed at Tiny Telephone. “He understood our band and the intention behind all of these songs–it was really just good vibes from start to finish,” says Laila.

Their singular sound and ability to surprise listeners is something that has driven Talk Talk Talk. You’ll be hard-pressed to find two songs that sound alike. Considering each of the band’s four members are drawn to everything—groovier R&B, lo-fi punk, fun, fuzz-pop and jazz—they’re able to create a bold collage throughout their music.

Talk Talk Talk is largely a combination of sci-fi and sentimental songs penned by the group. Lead single “Lizzie” has a robotic nature that evokes Devo and Industrial Hammer Factory with the warmth of lo-fi punk vocals. The group takes jabs at the absurdity of the current reality and the “5G” future. “LA 2032” is a futuristic guitar-pop that pulls the group’s candy-coated vocals into focus. The band pivots from looking ahead to nostalgia on “Sunburn”—an oldie but goodie that pays homage to the high-energy, carefree music scene of their beginnings.

But there are more intimate moments nestled in the record, too. On “Typing,” Staz wistfully reflects on losing two dear friends to overdoses within a two-year span. “It’s like reminiscing on the times with them and how intense it is when you find out someone you care about passes away,” she explains. “You can just feel that their name is in the air everywhere, and you just want to be able to talk to them.” The spacey, stripped-back “Over and Done” details the headspace of experiencing low self-esteem and the downward spiral it can inevitably create.

But regardless of the subject matter, there’s catharsis in the way the band loses themselves in their songs. Opener “BWP,” for instance, feels like a fuzz-filled jam session flanked by warbled vocals. But it happens to highlight the band’s advanced musicianship. That exuberant, freewheeling spirit is channeled on the sticky emo jaunt “6th Street Bridge,” where Laila sweetly teases, “I don’t listen to music anymore.” The epicenter of the record, however, is “Freak Out,” which helped inspire the album title. A sisterly homage full of Shangri-Las-like call-and-responses, the track is—in a way_a love letter to their bond. With Talk Talk Talk, The Paranoyds prove their connection is unbreakable—and their secret language is for life.