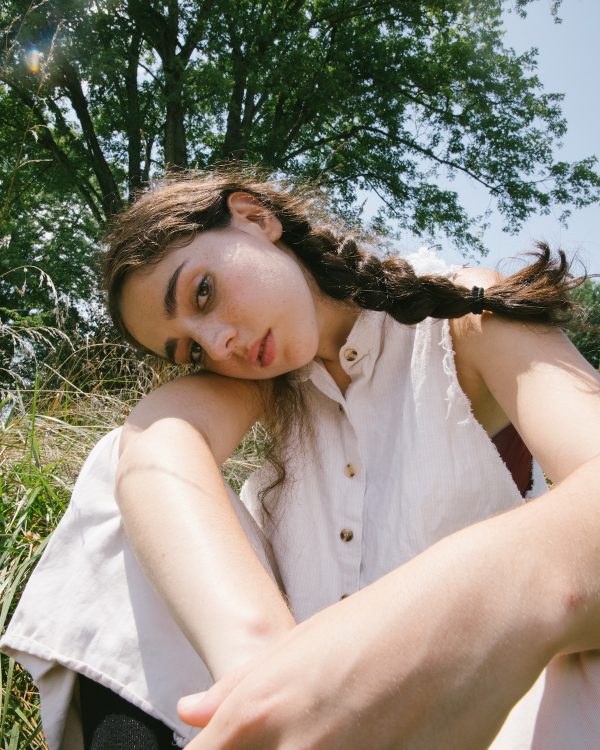 New York-based singer/songwriter Samia Finnerty’s debut album, ​The Baby​, is about learning how to be yourself, by yourself. Embarking on her first tours––far away from friends and alone in green rooms across the country––she began to untangle just how much of her own identity had been created by those she held close. Each of the twelve songs that make up ​The Baby, d​ue this fall via Grand Jury Music,​ ​find Samia holding up her relationships as a mirror, reflecting her own truths and learning how to show up for herself when there’s no one else around.

The result of this introspection is an album that is bold and authentic, philosophizing while surgically examining the mundane. On whiskey-tinged standout “Big Wheel,” she provides a status report on those closest to her, checking in on a liar in Montana and an old friend in Japan who just bought new shoes. The breathtaking “Stellate” finds her grappling with power imbalance and a fear of confrontation: “​​you buy me a big bucket/and I scream into that/and when it overflows you want your money back​.”​ She laments the closing of downtown East Village haven St. Dymphna’s, facetiously boasts getting “Fit and Full” off apple cider vinegar and kale and threatens to get fully naked in a hot restaurant. She vacillates between humorous and harrowing often within a single line, a skill born from growing up with the internet and all of its simultaneous horrors and pleasures. Each song is centered by Samia’s incredible voice, which effortlessly glides between campfire intimacy and 90’s rock panache.

While these songs explore Samia’s fear of being alone, they were lovingly brought to life with the help of her community. Many of her tourmates eventually became collaborators as she prioritized working with old friends and kindred spirits. Early demos of ​The Baby ​were workshopped with members of the band Active Bird Community, and the album was produced by Jake Luppen, Nathan Stocker & Caleb Hinz, the former two best known as members of indie-pop rebels Hippo Campus. Along with studio whiz Lars Stalfors (Foster the People, Soccer
Mommy), Samia assembled a seemingly disparate crew, stretching from Los Angeles to Minnesota to New York, connected only by her trust and vision. Together, they create a lush sonic world that refines her razor-sharp songwriting into something both timeless and current, a place where both Fiona Apple and later-era St. Vincent are paid deep respect.

Samia first discovered her prodigious songwriting talents at age fifteen, when artists like The National and Nirvana gave her love of poetry a newfound focus. She began playing open mics at the Bareburger on 34th and 3rd. She made a fake manager’s email address to book shows. She sang in any band that would have her and eventually formed her own, developing a must-see live show that often features Samia kissing bandmates and humping amplifiers while somehow never missing a note. The graphic and powerful “Limbo Bitch” echoes this energy, as Samia addresses herself in the midst of an intense physical act that could be romantic, musical or somewhere in between. It’s the perfect encapsulation of her uncanny ability to simultaneously laugh, interrogate and wrap the listener around her finger; to be both the performer and her own critic at once.

The daughter of actors who spent her childhood between New York and LA, Samia has long struggled with knowing too much about show business––the industry’s casual cruelty and short attention span, the relentless need to reduce women to their bodies or their minds and seldom both. On the album closer “Is There Something in the Movies?” she acknowledges this notion by singing ”​Everyone dies but they shouldn’t die young/Anyways you’re invited to set.​” Throughout ​The Baby, s​ he combats her vulnerabilities with fearlessness and maturity, using her struggle against loneliness to create a breathtaking debut that puts Samia in a class all her own.