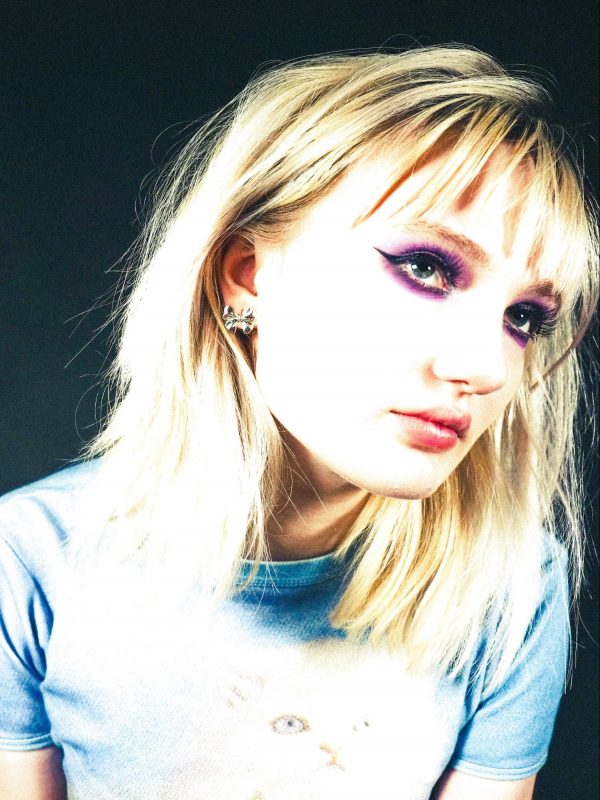 Jackie Hayes keeps things moving forward. Written over the past year and a half, debut album, ‘Over & Over’ retains the rough around the edges, sparse production and guitar work of previous EPs (‘There’s Always Going to Be Something,’ ‘Take It, Leave It’) while establishing a newfound focus. Produced by Billy Lemos (Omar Apollo, Binki, Dua Saleh, Lava La Rue) and mixed by Henry Stoehr of Slow Pulp, the record is a razor-sharp portal into Hayes’ thought process, while she navigates the fast lane of facing up to every full-bodied experience.

Hayes’ tracks are short and compact, brief gut punches steadied by inherent rhythm. Outwardly simple, the melody often seems to collapse inward, with repetition and intonation that sounds like one long vicious cycle. Intuitively fleshing out an instrumental with a melody in mind, she slowly builds song structures that bend until they break, only adding in lyrics later. Singles like “Bite Me” and “Wish It Was” sound like internalized monologues that blur the lines of pop and rock, where Hayes’ vocals sit vulnerably bare. It often feels like she’s putting on a brave face, and ‘Over & Over’ excels in the way that Hayes seems to say, in spite of everything, she’s doing things exactly the way she wants.

Hayes admits to being dissatisfied with some of her previous work, often over-editing vocals to acute precision in a desire to achieve perfection. ‘Over and Over’ feels like the real introduction to her music, viscerally physical as she explores what it takes to make music that feels true to her entire being. After playing her first live shows in years in early 2022 (supporting Briston Maroney and Sunflower Bean), Hayes went back and re-recorded many of the songs on the project. The validation of seeing a tangible reaction to her music was a confidence boost: “I forgot that I can sing,” she admits. However, while working on the batch of songs that make up the record, she was dropped by her then-label, and lost her voice from the exhaustion of touring. At the same time, she had to get stitches from a wine glass exploding in her hand at her day job. She drove herself home from the ER, then went back to work after two days, although she couldn’t properly play guitar for a month. ‘Over & Over’ reflects the frustrations of this stop and start pace, and many of the songs feel like collective manifestations of Hayes reasoning with herself to keep going.

Hayes believed in herself more than anyone else from a young age, entering county fair talent show competitions where she would cover emo bands like Paramore or Pierce the Veil, while also playing piano in the church choir before she was ousted for her irreligious beliefs. Sneaking out to play DIY shows in and around her hometown of Waukegan, Illinois, her unsupportive parents threatened to kick her out before she moved to Chicago alone at age 19, where she worked various full-time jobs throughout the pandemic to make ends meet while making music. ‘Over & Over’ retains this spirit of stoic independence. Even now, Hayes maintains her extremely hands-on approach to her music, keeping a trusted inner circle that include long-term collaborator Lemos and Michael Penn II, who assisted in co-writing 2021’s ‘There’s Always Going to Be Something’ as well as six tracks on the new record.

Hayes’ penchant for insularity is part of what makes ‘Over & Over’ such a rewarding listen. Many of the songs were made in a period of extreme isolation and heightened negativity, and read like a stream of consciousness journal entry that gradually reveals insights through Hayes’ self-discovery in real time. The album is “more about a feeling than a specific experience,” she explains, and it’s difficult not to pick up the uncomfortable anxiety that runs rampant through the 10 tracks, most of which play in rapid motion. Hayes is transparent about her very personal fixations, wrangling with the vulnerability that comes with perception, from struggles with body dysmorphia to the pressures of being a musician in an industry fixated with youth and hype that’s often fleeting at best (“Intro”, “Focus”).

“There’s not a single love song” on ‘Over & Over,’ but the record showcases Hayes finding solace in her own spirit. “Me knowing I can stop doing this whenever and completely change course made it easier to keep going,” Hayes explains. In the end, it’s only her own voice that matters. “I told myself / I just have to see this through,” she sings on the singular ballad “Hard to Believe,” but sometimes just being present is enough. It’s a choice she’s determined to stand by.