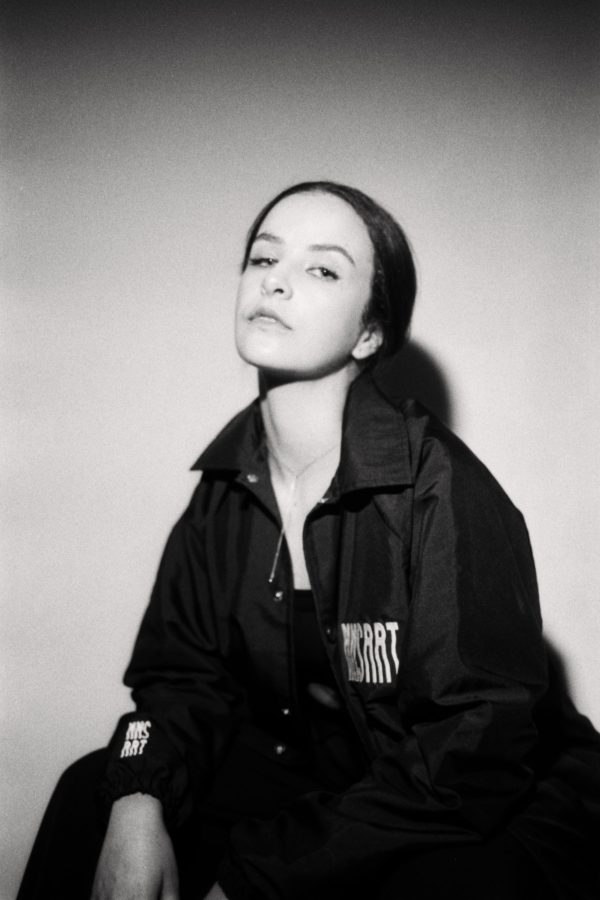 acts of rebellion is a call to fight, to live, to be present. It’s a record of small details and grand gestures, a manifesto of simplicity, a record brimming with life. Colombia-born and -raised musician Gabriela Jimeno, known as Ela Minus, wrote, performed, and produced the collection entirely alone. Ela melds machines with her living body, creating complex, technical electronic music that exudes a vibrant warmth, and a stark, celebratory affirmation that our breaths aren’t infinite.

That joyful acceptance of reality she attributes, among other things, to being South American. “I always have this melancholic feeling that sadness is the real truth about things,” she says. “I’m very connected to this kind of melancholic celebration. Colombia is rough, but there is much more joy there than any other place I know.”

Self-made and punk in spirit, Ela puts her own spin on traditional electronic music. As a self-imposed rule, no sound in her work is generated inside a computer. Preferring a human, analog approach, Ela—who spent years studying how to design and build synthesizers—only uses hardware to perform, write, and record. She rejected laptops largely because of her background as a musician who, for years, played acoustic instruments professionally. She cites Kraftwerk and early Daft Punk as inspirations: electronic artists who, in her words, “can exist both inside and outside the club context.” “I deeply identify with club culture, and want to make music to dance to,” she says. “I also want to make songs in the more traditional sense, with melodies, lyrics, and singing. I want to make songs that stay with people through the years”. As a teenager, she saw a clear connection between the freedom of the DIY scene she grew up on and club culture—the power of people being in a room, present, experiencing something unique and powerful together.

Before forging her path as a solo electronic artist, Ela was a drummer in the teenage hardcore band Ratón Pérez for almost a decade; she’d joined when she was just 12. This background taught her to believe we all have the power to change things, and you feel that throughout these 10 songs. Her sharp, coiled words are cathartic—due in part to her approach to writing them. “I always start writing by improvising alone,” she says. “Once I have an instrumental I’m happy with, I intuitively grab the mic and sing a phrase with a melody in it. I always keep that initial phrase.” Because she’s kept to this self-imposed rule, her songs all retain an unedited kernel of inspiration.

The title of the first single, “they told us it was hard, but they were wrong”, could easily be a line shouted by Fugazi, a band Ela has mentioned as an inspiration. The sentiment is a guiding point for the album, too. She explains, “It annoys me when people use ‘difficulty’ as an excuse not to take chances, not to be brave, not to do whatever it is that makes them happy. I believe in loving the difficulties as much as the rewards, and loving the process as much as the result. I believe this kind of love—not just romantic love—makes you invincible. I want people to feel invincible when they listen to this song.”

acts of rebellion is an optimistic, uplifting album. It’s a collection about the personal as political and an embracing of the beauty of tiny acts of revolution in our everyday lives. Throughout, a sense of urgency and a call to arms is mixed with this love and appreciation for reality—because even revolutionaries need to leave space for simple human interaction. Ela frames the dreamy, pulsing “el cielo no es de nadie”, which she sings in her native Spanish, as “an ode to little, constant, every day acts of love.” This love of reality also ties into the spacious, digital droplets of instrumental “do whatever you want, all the time”. “Tony” suggests you throw your phone out and be present with someone in the same space—in the case of this song, while dancing.

Ela goes it alone on acts of rebellion, but the final song, “Close,” features its first and only outside guest, Helado Negro, aka Roberto Lange, another South American artist living in Brooklyn. Ela contributed to his 2019 album, This Is How You Smile, and when a friend suggested “Close” should be a duet, “I immediately heard his voice in it,” she says.

On acts of rebellion, you sense the stories hidden in everyday things. You feel Ela’s personality and viewpoint; you sense her presence. The cover features a photo of her, most of her face obscured, but her eyes sharply focused. Onacts of rebellion, she’s asking us to make contact not just with her, but also the people that inhabit our lives. She’s suggesting we leave our gadgets behind in favor of flesh-and-blood communities. She’s asking us to think, dance, and love, while she coaxes humanity from her hardware—machines that rattle and whirr alongside her and, in turn, make us feel more alive.