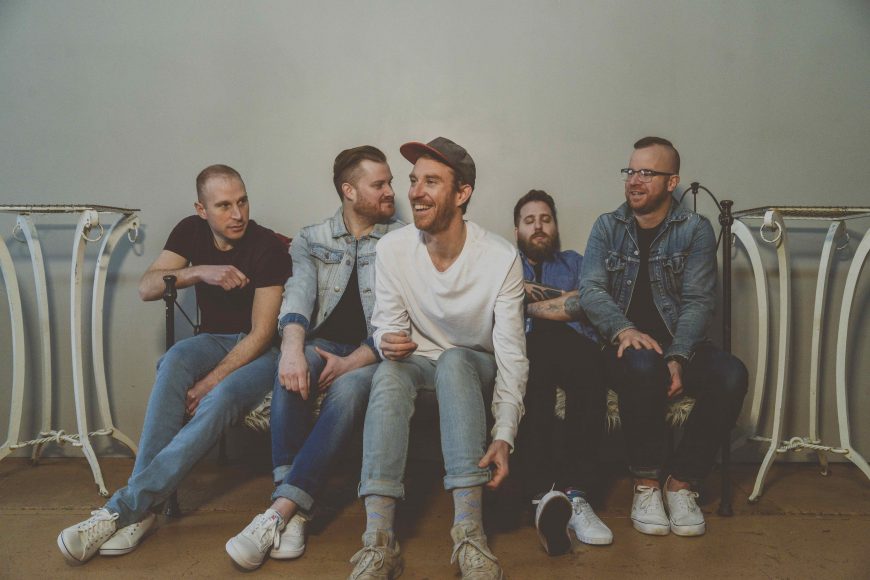 Odds are pretty good that you have already heard Bronze Radio Return, even if you may not realize it. Since 2008, the Hartford, CT six-piece has independently sold over 100,000 singles, racked up more than 26 million streams on Spotify, and, with songs such as “Further On” and “Shake, Shake, Shake,” they have impressively notched nearly 100 high-profile placements ranging from the 2014 film St. Vincent, to commercials for Nissan and Starbucks, to numerous television shows. Along the way, their hyper-charged and hypnotic stage presence has turned bystanders into believers at festivals including Bonnaroo, Lollapalooza, Hangout, and Firefly.

Their new EP, Light Me Up [DigSin], out October 16th, is posed to skyrocket them even further. Armed with a sound that’s one part indie dance party and another part roots rock laced with a pop sensibility, the music of Bronze Radio Return is begging to be blared with the windows rolled down. These boys stand primed for impact in a big way.

“This band is the sum of its parts,” explains singer Chris Henderson. “We focus on songs in the studio and energy on stage. We love to incorporate different elements to create a diverse listening experience. For as fun as it is, we spend a lot of time writing about themes that are meaningful to us. It’s like a big ol’ bowl of chili. There are all different spices and flavors. When you put it in a cauldron and stir it up over heat, it creates this new taste.”

In order to cook up this latest batch of songs, Bronze Radio Return headed down to Sonic Ranch Studios in El Paso, TX. Just a stone’s throw from the Mexican border, they lived, ate, slept, and created at the sprawling complex with longtime producer Chad Copelin [Ben Rector, BRONCHO, Sufjan Stevens]. The process strengthened their bond more than ever and the group emerged with six tracks that immediately captivate.

“We spent three weeks there,” continues Chris. “Everybody was incredibly kind and hospitable. Each day, we would wake up and have this wonderful breakfast, record for several hours, come back to the dining hall for lunch, record more, and then go back there for dinner. It was very communal, and we really felt this aspect of togetherness. That comes through in the music.”

The band finished up the nuts and bolts at Copelin’s Blackwatch Studios in Norman, OK, before mixing began. F. Reid Shippen (Lady Antebellum, Ingrid Michaelson) mixed half the songs while Mark Needham (The Killers, Imagine Dragons) mixed the other half, including title track and first single “Light Me Up.” The song shimmies from a propulsive guitar and bombastic beat into an unshakable bridge, “I’m looking for a little action.” There’s definitely no shortage of that…

“It was a twofold idea in my head,” says the vocalist. “We love playing live. When you fill up a room full of fans who are excited to hear your music, all you can say is, ‘Let’s have fun. Let’s feel good.’ On a second level, I prefer surrounding myself with positive people. There’s something about that energy when you’re around somebody smiling. It lights you up a little bit. When you seek out people like that, you end up feeling positive yourself, at least from my point of view.”

The second single “Only Temporary” culminates on a striking falsetto in between swirling electronics and a galloping sonic strut. “We pulled this together around the concept of having feelings for somebody who is in a relationship with a person who’s just dragging them along,” he says. “You think to yourself, ‘Why are you with that guy when I wouldn’t treat you like that?’ That’s the story.”

It’s nearly impossible not to fall in love with the rousing, cinematic soundscape on Light Me Up. Once again, the band has turned up with songs that draw you in and give you that undeniable urge to dance and sing along.  In many ways, that spirit stands reflected in the moniker Bronze Radio Return.

“I learned a lot about music from listening to this beautiful, old bronze tube radio that my dad had,” explains Chris. “Everyone in the band shares a similar lineage of being influenced by the music we grew up with. We all figuratively had our own Bronze radio. It’s a return of our inspirations and collective interpretation of it. That’s what this band is.”